Marvin Olasky
|
Posted: Mar 10, 2019 12:01 AM
Share   Tweet
The opinions expressed by columnists are their own and do not necessarily represent the views of Townhall.com. 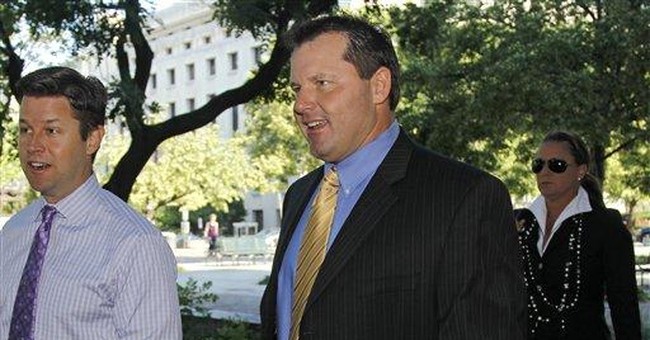 In the spring young men’s hearts turn to romance and old men’s hearts to baseball. As James Earl Jones intones in “Field of Dreams,” a great but flawed movie, “The one constant through all the years has been baseball. America has rolled by like an army of steamrollers. It has been erased like a blackboard, rebuilt and erased again. But baseball has marked the time.”

During my first decade of WORLD editing I sometimes played at being a sportswriter, taking a different son each year to spring training. An article I wrote 25 years ago included interviews with two great but flawed athletes, Roger Clemens and Michael Jordan: Both were then 31. I sat next to them in locker rooms and asked their thoughts about God and church. They talked with a mixture of yearning and public relations -- I still don’t know what the percentages of each were -- but their comments were interesting.

Here was the lead of the 1994 story: “It was only a spring training workout, but Boston Red Sox pitcher Roger Clemens grunted as he threw pitch after pitch in the warm sunshine of Fort Myers, Florida.?... He is determined to return to league-leading form this year, and also is thinking about getting back to his theological roots.”

Maybe. Here’s what he said: “My father passed away when I was nine.?. When I was young, going to church was like the sun coming up. You could count on it, Wednesdays and Sundays. Then when he passed away, my mom took on three jobs and raised six of us. She was the force behind us all, she still is, but that church consistency was hard.?. I’ve never really had it since then.?... There’s so much media and off-the-field stuff.”

‘So much stuff.’ I thought about that in 2008 after the Mitchell Report on the illegal use of steroids named Clemens 82 times, and newspaper reports accused Clemens of adultery with five different women. But after a grand jury indicted Clemens for lying to Congress about his use of performance-enhancing drugs, two juries failed to convict him. Nor did his wife Debra divorce him: They have four sons and will have their 35th anniversary this year.

Sportswriters have refused to elect Clemens to the Baseball Hall of Fame because of the apparent drug use and perjury, but 25 years ago he seemed to yearn for a simpler life of bat, ball, and maybe Bible.

Michael Jordan similarly mused about religion a few months after his dad was murdered and he gave up his greatest-of-all-time basketball glitter for a lowly minor league baseball life. In 1994, with legs stretched out before his locker, Jordan said, “These days I think about God a lot.?. I read the Bible a lot.?... I see that whatever happens, happens for a reason; I wouldn’t be here without the will of God. And my father’s dying last year, I try to get something positive from that.”

Jordan said he had been thinking about his parents and hoping his children could have a religious upbringing like his: “We had to go to church every Sunday. I learned that God’s in charge.” But fame made Jordan the center of attention whenever he went to church: “It’s not good for me, it’s not good for my kids, to get that attention. Sometimes my wife or my in-laws will take my kids so it will be a normal situation.”

Jordan in 1994 said he was finding sustenance from reading the Bible, talking with pastors, and just playing in fresh air and running on grass: “I got so tired of arenas.?... God knew that it was a thought of mine to play baseball, something I always dreamed of when I was a kid.”

But that year Jordan learned he couldn’t consistently hit a curveball. In 1995 he was back amid NBA bling and on his way to three more championships. By 2013 Jordan was ultra-rich but had little joy, according to a lengthy “ESPN The Magazine” article that closed with a 1 a.m. portrait of him watching Westerns on his bedroom television, as he did every night: “The film on the screen is ‘Unforgiven.’ He knows every scene, and sometime before the shootout in the saloon, he falls asleep.”