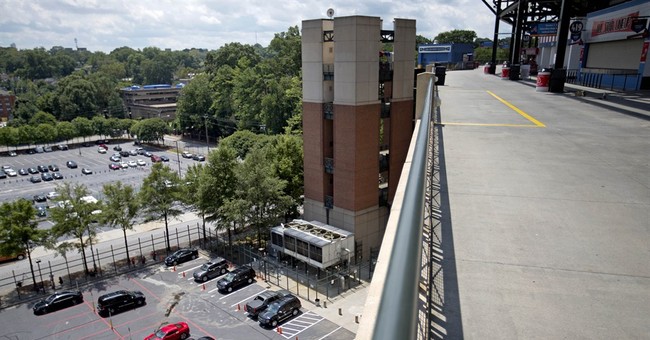 August 25 is the 100th anniversary of the murder conviction of Leo Frank, a 31-year-old Jewish-American factory superintendent who lived in the Summerhill neighborhood of Atlanta, just south of downtown. Frank had purportedly strangled to death an employee, Mary Phagan. In 1915 Georgia’s governor commuted the sentence, arguing a miscarriage of justice had occurred. In response a mob lynched Frank, then cut down his corpse, stomped on his face, and cut off pieces of his nightshirt and rope to sell as souvenirs.

A plaque on the wall of a building on Georgia Avenue, Summerhill’s main drag, testifies that Frank’s house once stood there. I walked that neighborhood (and wrote about it) two decades ago, did so again in 2003 to see what had changed, and did so again last month. Once-vibrant Georgia Avenue is now a desolate stretch of deserted storefronts and weeds. South of it lies the part of Summerhill lynched by federal programs, philanthropic schemes, and a promised 1996 Olympics surge that ended with a few slapped-on coats of paint.

Summerhill, poor but with generally intact families, began dying in the 1950s and 1960s as federal urban renewal, along with expressway and stadium construction, reduced population density. So did Lyndon Johnson’s Model Cities program, which in six years spent $173 million in Summerhill and vicinity with the goal of creating “new homes, schools, parks, community centers, and open spaces,” since Summerhill had “less than half as much land per person devoted to recreational purposes [as the rest of] the city.”

One problem: As population density declined, so did the number of customers. Businesses closed. Unemployment, welfare, and crime grew. Jimmy Carter as president threw more money at the problem and did the same years later as head of the massive nonprofit Atlanta Project in the 1990s. More than $50 million from governments and nonprofits entered the Summerhill neighborhood during the six years before the 1996 Olympics. The major result: Corruption increased, with political, regulatory, and community leaders lying and stealing.

Bob Lupton, a veteran, usually successful Christian anti-poverty leader who lives in Atlanta, rues what happened: “Summerhill is my best example of community development gone wrong.?…?Very savvy, respected business leaders checking their business sense at the door in the name of servanthood to the community. Handshake loans, multimillion-dollar real estate decisions with no collateral or even organizational structure to back them up.?…?Within a month a vision that had taken five years to grow was dead in the water. It set race relations back a decade or more. No one has wanted to touch Summerhill since.?…?The Summerhill well has been poisoned.”

The only bit of good news (and it’s mixed) is what’s happened north of Georgia Avenue, the area of Summerhill closer to downtown: Gentrification, with new and refurbished houses selling in the 200s. As more private money comes to Summerhill, a neighborhood now without supermarkets, pharmacies, and banks will gain them. That doesn’t help long-term residents priced out of their neighborhood, for market forces can be brutal: As Wilhelm Ropke wrote in A Humane Economy, capitalism works best only with a Christian sensibility. But overall, the Summerhill lesson is that entrepreneurs are public servants much more often than politicians who play with the money of others.

Atlanta politicians now are repeating the mistakes of the past by clamping down on hard-working, self-employed street vendors who for years have set up kiosks on street corners near Atlanta ballparks. (Former heavyweight boxing champ Evander Holyfield was a Summerhill resident who earned money that way.) City officials, though, signed a deal with one big company that gave it a monopoly over all street vending: The city would get some money and the kiosks would have a uniform look. Larry Miller, a vendor for 20-plus years, has organized the Atlanta Vendors Association and is fighting City Hall with the help of the Institute for Justice: “All we want to do is work and feed our families.”

By the way, the souvenirs from Leo Frank’s lynching sold so fast that police said sellers needed a city license. Two new organizations emerged in the lynching’s aftermath: the 20th century Ku Klux Klan and the (Jewish) Anti-Defamation League. In 1986 the Georgia State Board of Pardons and Paroles granted Leo Frank a posthumous pardon.