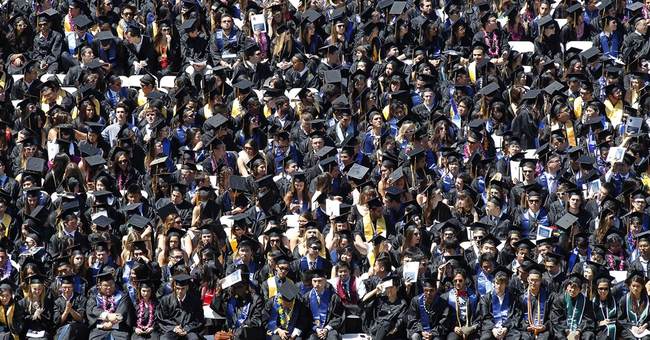 We call graduations “commencements” because students, once schooling is done, enter “real life.” In that sense “dying” is the most radical commencement, as we move from what C.S. Lewis called the shadowlands into a far sunnier existence. In life, the commencement each of us should most remember is not an academic degree ceremony but the time we professed faith in Christ. That’s when we end our total captivity to sin and start occasionally doing things right.

Given this concept of Christian commencement, who has been the most effective commencement speaker on any college campus during the past 30 years? My redefinition knocks out a prime contender, Kermit the Frog, who received an honorary “doctorate of amphibious letters” when he spoke at Southampton College’s commencement in 1996. It also leaves out most of this year’s luminaries, including President Barack Obama (Ohio State and Morehouse), Vice President Joe Biden (University of Pennsylvania), Julie Andrews (University of Colorado), Stephen Colbert (University of Virginia), Arianna Huffington (Smith), and Deepak Chopra (Hartwick).

The preliminary college commencement schedules showed one place where students could hear a speech that would help them commence: Johns Hopkins on May 23, where famed neurosurgeon Ben Carson was on tap. Sadly, some students opposed that invitation because Carson stands up against two juggernauts, evolution and gay rights. Carson said he did not want to be the center of attention on a day when the students should be central, so he withdrew.

What about students elsewhere? Who helps them commence? One person has, for 30 years: Since Ronald Reagan’s first term, 58-year-old Cliffe Knechtle has been on the road three-fourths of the time from September through May, answering student questions daily for two to four hours in outdoor public areas of MIT, Harvard, and at the universities of Rhode Island, Connecticut, Columbia, Virginia, North Carolina, Georgia, Florida, Michigan, and Wisconsin, along with Duke, N.C. State, Florida State, and others.

Knechtle differs radically from the brimstone preachers who scream that students are whores and whoremongers. He typically speaks for five minutes and then takes questions from students. I watched him years ago on the West Mall of the The University of Texas at Austin, and watched him again this year as a fluctuating audience of about 150 listened, some with rapt attention. Knechtle responded with great self-control to most questions, stepping up the intensity only when wise guys sought his scalp: “I’m leaning more and more toward the students providing the first heat. If I provide the first heat, that can miscommunicate.”

Knechtle typically uses low heat as he listens to students who want a good society but have nihilistic principles. He then pushes them to push their thinking to its logical conclusion: “I love how Nietzsche poured scorn on people who said, ‘I don’t believe in God, but I’m going to borrow from Christianity all the goody-goodies, like meaning or objective morals.’” When Knechtle propels students toward an understanding of where their theories will land them, he shows what Britain’s Edmund Burke wrote about the French Revolution more than two centuries ago: “In the groves of their academy, at the end of every vista, you see nothing but the gallows.”

Knechtle says he has learned over the years that evidence of biblical accuracy does not change hearts. He asks students to make “a decision of the will, to say ‘I want to know God, if God is there.’” He recalls his brother Stuart’s experience as a Princeton student who would answer questions from his classmates until midnight, then turn to them and say, “Gentlemen, if these intellectual questions are really keeping you from Christ, we’ll pull an all-nighter. But if the real issue is ‘I want to sleep around’ … then let’s face that and stop hiding behind these intellectual smokescreens.”

Some students walk away from that—but those who listen can celebrate commencement.