Museum Visit Reveals a lot of Uncertainties Within Darwinism 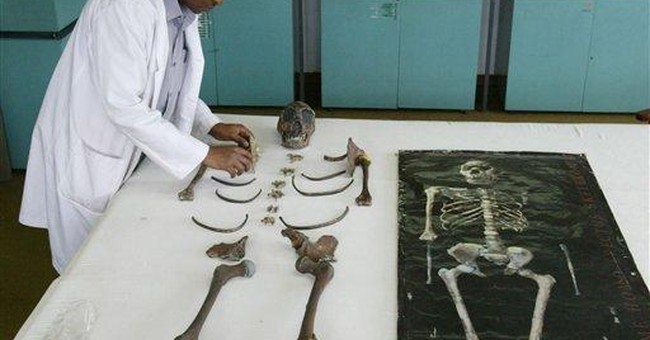 I went to two New York City churches on the last Sunday morning of May: First a Christian one, then the American Museum of Natural History, a towering steeple within the Church of Darwin.

My first stopping point: The Spitzer Hall of Human Origins on the lower level, a dark and crowded chapel with hairy figures created to show man's purported hominid ancestry over several million years. Some parents were catechizing their young children: "Look, those are our relatives." (As I listened, one unbelieving girl, staring at the private parts of the hirsute mannequins, laughed, "We didn't come from them." A well-trained little girl said, "Mommy, they look like us.")

How definitive were the exhibits? One, titled "Interpreting the footprints," depicted two ancient, hairy hominids walking together. The larger male had his arm around the smaller female. The explanation in small print explained, "To create the scene in front of you, experts interpreted footprints left behind.?... Here a male and a female walk together. Was it a mother and child instead? Possibly. We'll never know for sure, but this scene is consistent with the evidence."

Maybe we should be grateful for this defense of traditional marriage, but dozens of other scenes could also be consistent with the evidence. It was encouraging to see the small print on many of the display cases admitting uncertainty—"Perhaps?... perhaps?...?may have been?...?may well have been?... seems?...?seems?...?seems?...?appears to be?...?suggests?... suggests." But a video screen showed a continuous loop of genotype pioneer Francis Collins, the National Center for Science Education's Eugenie Scott, and Brown professor Kenneth Miller expressing Darwinian certainty. Miller insisted that disbelievers in evolution want to turn biology into "little more than stamp collecting."

With apologies to philatelists—the Hall of Human Origins exhibits are little more than stamp collecting, because the evidence for humans arising from animals is insufficient. While a big sign proclaimed "Our family tree," small print on one exhibit acknowledged, "Unfortunately, hominid fossils from the crucial period between 200,000 and 100,000 years ago are quite rare." Unfortunate for those who claim the evolution vs. creation argument is over, when recent discoveries of cell complexity mean that it's just begun.

Similarly, a display titled "The history of human evolution" admitted that "The web of clues is difficult to unravel," but then claimed, "It is clear that the human family has a rich evolutionary history." Clear as mud. One plaque stated that "Sivapithecus is a plausible direct ancestor of orangutans" and then admitted that the creature's body "suggests a more complex evolutionary relationship."

The honest curators of the Hall of Human Origins have my sympathy. They are like priests in a diocese destroyed by pederasty who have to cover up their concerns and pretend that all is well overall, despite the anomalies, uncertainties, and complexities. I appreciated the half-honesty revealed in their perhapses and maybes—but they might have more fun if they could move from the lower level up to the fourth floor, where the dinosaur bones rule.

On the fourth floor, one dinosaur exhibit announced, "Bones, teeth, tracks?...?this evidence amounts to only a tiny fraction of information about what the living animals were really like.?...?Naturally, we want to know everything about dinosaurs: What colors they were, what they ate, how they reproduced.?...?The overwhelming absence of explicit data makes the questions that those intriguing animals arouse difficult to answer."

The fourth floor displayed not only dinosaurs but humility: "No one knows what the colors of dinosaurs were when they were alive.?...?This evidence does not allow us to draw conclusions about parental care in extinct dinosaurs. We can only make guesses."

Astoundingly, the dinosaur experts undercut the Darwinist propaganda loop in the Hall of Human Origins: "We cannot be sure how pachycephalosaurs used their skull caps because theories about the behavior of extinct animals cannot be tested." That's what many creationists say: Scientific research emphasizes experimentation, and we cannot experiment on the past.

One sign on the fourth floor generalized rightly: "While it is important to make intelligent speculation about extinct animals, we are overstating the strength of the fossil evidence if we present these ideas as truth." Students in schools should hear both evolutionist and creationist theories. They should then learn what we know scientifically—and what we do not.