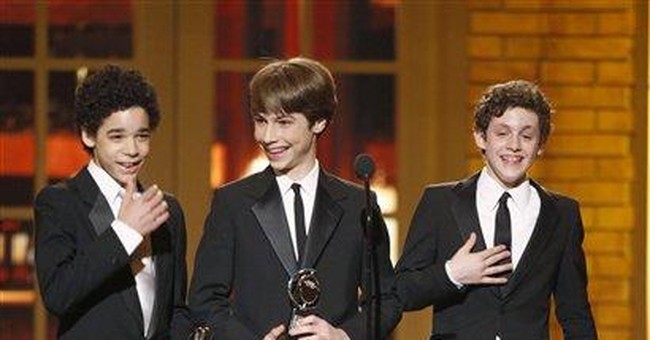 This summer I wrote about Leonardo Le San, a young pianist playing at Carnegie Hall who has the guts to list on his Facebook page, "Religious views: Christian" (see "A Christian at Carnegie Hall," July 31, 2010). This column starts with an equally gutsy declaration by young actor Jeff Kready, who's playing one of the five major roles in the Tony Award-winning musical Billy Elliot—"Kansas music teacher turned actor: credit to God alone for this amazing opportunity."

That declaration was in the "Who's Who in the Cast" section of Playbill, the theater magazine. Actors can put in the line of their choice (another from Billy Elliot wrote "Let's Go Mets") and occasionally an actor does thank God along with family members—but "credit to God alone"? In an occupation filled with egotists, not many say that.

My wife, Susan, and I had dinner with Jeff and his wife, Nikki, who works in another Broadway musical, the revival of Promises, Promises. Work it is, eight performances a week. They are celebrating their first wedding anniversary this month, but she'll continue commuting between their Harlem apartment and Broadway while he heads out on the highway with the Billy Elliot national touring company: Stops coming up in Durham, Cleveland, Minneapolis, Charlotte, Tampa, Houston, Seattle, Portland, Tempe, Denver, Dallas, and St. Louis.

Nikki came to Manhattan in 2001 and found out the day after 9/11 that she had won a role in Aida. She grew up dreaming of singing on stage, and her eyes light up when she talks about living the dream in New York as she sang "Summertime" in Porgy and Bess before 3,000 people. Jeff , 28, came in 2006 after leaving a job as a music teacher and then working at the Dutch Apple Dinner Theater in Lancaster, Pa. He landed a role in the Les Miserables revival, understudied the Jean Valjean lead role, and got to perform it: Recalling that dream moment, he said, "You feel like your head's going to explode."

They are the winners in Manhattan's never-ending race to be working on stage and to have a role in the next musical when the one you're in closes. Neither has had to work a "survival job" in New York. And yet, both Jeff and Nikki tell aspiring singers/actors with suitcases almost packed, "Don't come here unless you can't see yourself doing anything else."

Why? It's materially risky but even harder spiritually. You need to be concerned with looks without looking into the mirror at every spare moment and admiring yourself. You need to promote yourself without becoming self-absorbed. You need to keep going to casting calls and not be cast down when you're not selected. You may have to be separated from your spouse during national tours.

Nikki notes that being a Christian is helpful "because you know there's a bigger plan for your life, it's not all about you." Jeff nods but adds that "you're representing Jesus" within a culture antagonistic toward Him, so non-­Christians cheerily say, "aha, aha," if you falter—and Christians may also judge you for accepting certain roles.

For example, some Christians will not want to see Billy Elliot, which is based loosely on a sometimes-violent 1984-85 British coalminers strike and includes lots of rough language as well as a cross-dressing boy who yearns to kiss 11-year-old Billy Elliott. But Jeff has a terrific role in Tony, Billy's big brother: "not a very nice guy," Jeff notes. Tony is gung-ho on striking—the actual strike divided the coalminers so badly that the union leader never risked a vote authorizing it—and ready to hit anyone who isn't. He and their dad oppose Billy's desire to take ballet rather than boxing lessons.

The gay undertones are obvious, but the musical is also in the American tradition of kids blazing their own trails. The first full-length movie with sound, The Jazz Singer, featured Al Jolson as the son of a Jewish cantor who wants him to sing at synagogue services—but Jolson's character loves Broadway jazz. In a sense, that's the Jeff and Nikki story as well: They could perform in "wholesome" entertainment in Lancaster, or Branson, Mo., or Pigeon Forge, Tenn., but they've received both an internal and an external call to Broadway—and they don't hide their faith in Christ.