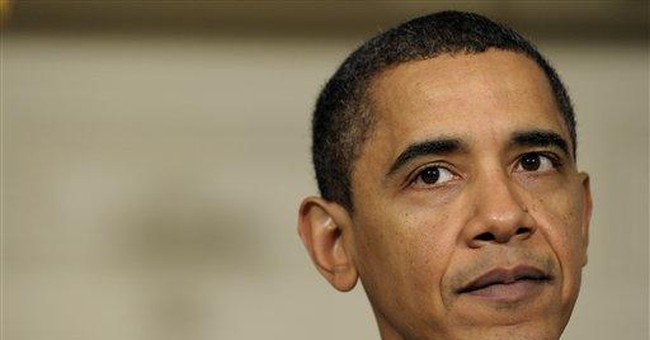 NEW YORK—"If I can make it there, I'll make it anywhere." Maybe. Two dishonest productions show why Barack Obama, so popular in January, was making it only in Manhattan and other Democratic strongholds as he limped into December.

Let's start with the United Homeless Organization. In recent years many midtown corners sported folding tables holding up plastic jugs and solicitations to "feed the homeless." Not until late last month did state officials file a lawsuit stating that the street requesters kept most of the dollars for themselves and gave the rest to UHO honchos who may have cleared over $100,000 per year and gone on Home Shopping Network sprees.

Some of this was old news. The New York Times in 2001 reported the essence of the scam but still somehow dubbed UHO "legit." Journalists were not eager to bust solicitors, some of whom were homeless themselves: Didn't they need a stimulus? So what if the organizers, according to the suit, "treated the 'fees' as their personal kitty, dipping into them whenever they choose"? What if they "co-opted a tax-exempt, charitable corporate structure for their own benefit"?

Hmm. . . . Who else has grabbed money under false premises by turning taxpayer money into Monopoly money and co-opting a real need for his own political benefit? Barack Obama, with Nancy Pelosi and Harry Reid as allies, early this year used financial crisis as a rationale for the greatest surge in pork-barrel spending ever seen. Now Obama is using the real health insurance problems of 10 million to create a socialist medical sector for 300 million. Nevertheless, as unemployment rises and the dollar falls in value, Obama's popularity is waning.

America for over two centuries has had a self-correcting political system: When lies and corruption soared, the populace roared. The problem now is that so many millions of voters profit (or think they profit) from Washington scams. In the Great Depression, Franklin Roosevelt saw "one-third of a nation ill-housed, ill-clad, ill-nourished." Today, in the Great Recession, one-third of a nation is pandered to and stimulated, and that gives Obama a built-in voter base. Ideally, anyone who derives the bulk of his income from the government would see his conflict of interest and refrain from voting, but that's not about to happen.

A second Manhattan scam shows why the problem goes even deeper. A new drama that opened late last month, In the Next Room, is easily the worst play I've ever seen on Broadway. Two strikes: It's neither thoughtful nor funny. Third strike: It's based on a lie. The play, set in the 1880s, assumes that in the Victorian era men routinely oppressed women and that neither sex knew anything about sex. It takes outlier cases as the norm and a fringe theory about female hysteria as standard medicine.

I happen to know something about sexual conduct and medicine in that era because I did a lot of Library of Congress research while writing a book that centered on abortion in the late 19th century. Sadly, ignorant drama critics accepted the left-feminist views parroted by the play's author, Sarah Ruhl. Charles Isherwood of The New York Times, for example, waxed on about "documented history [that shows] how much control men had over women's lives, bodies and thoughts." Sure.

Other reviews were similar, with only the Newsday reviewer concluding on a quizzical note: "I still wish I understood the appeal." OK, here's the appeal: We're smart. Those old time folks were stupid. Ignored in the process: 19th-century women led major social service organizations, often ruled men from behind the scenes, and—gasp—generally liked sex.

Furthering the appeal: Many reviews noted that Ruhl is "one of the country's brightest young playwrights" and the winner of a MacArthur Genius Grant. Hmm. . . . Which prominent leader is also said to be brilliant? Ye who doubt: He's a Nobel Prize winner! Those 19th-century hicks, and their epigones like George W. Bush, were all stupid.

Many of Obama's supporters in 2008 voted their pocketbooks, but he went over the top with folks propagandized in college who voted their misshapen knowledge of history. They voted to slay the past. They voted to step into a brilliant future. Now, left with a bedraggled present, how many of them have buyer's remorse? We'll find out next November.