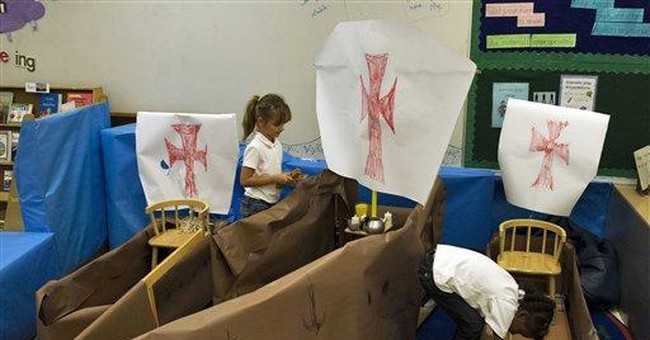 Confirmation of biblical wisdom came earlier this fall from an unlikely source: an Ivy Mikhail Gorbachev came to power in 1985 and saw the Soviet Union falling apart. He first announced a vague reform plan that proposed increased productivity, technological modernization, and some reform of the Soviet bureaucracy. That achieved little, so in 1986 he moved on to perestroika, designed to encourage initiative and reduce inefficiency. That didn't do much so in 1988 he introduced glasnost, which brought in some freedom of speech and a new law that encouraged private ownership of businesses. That good idea came too late to keep the Soviet evil empire from disintegrating in 1989 and collapsing in 1991.

The editors of The Chronicle of Higher Education—academe's trade journal—recently gave the well-read back cover of an issue to Hamid Shirvani, president of California State University-Stanislaus. Under a provocative headline—"Will a Culture of Entitlement Bankrupt Higher Education?"—Shirvani compared colleges and universities to the auto industry and noted that "resistance to change in academe has helped create inflexible, unsustainable organizations" like General Motors. He then, like Gorby in 1985, recommended a vague reform plan—"review redundancies, rethink staffing models, and streamline business practices"—along with several specific suggestions, such as larger classes and larger course loads for faculty.

One problem with such economically necessary reforms is that they will reduce traditional education's ability to compete with online offerings: If students don't get personal attention from classroom professors, they're often better off taking online courses (see "Class without rooms," Oct. 10). A second shortcoming is that Shirvani's reforms do not deal with the problem of left-wing-only campuses. American universities are not yet as disliked as Soviet institutions in 1989—football teams still spark loyalty—but as more donors and legislators rebel against campus intellectual repression, higher education's support base will shrink even as costs rise beyond the ability of financially beleaguered parents to keep up.

My own choice in this situation has been to leave the socialist sector of higher education and attempt to make a competitive private college work. That's hard going in today's economy, and for those who still hope to work within government-funded institutions a new alternative has emerged. Rob Koons, the University of Texas professor removed last fall as head of a UT Western Civilization program (see "Losing a beachhead," Sept. 12), is proposing that Texas legislators back the creation of charter colleges, as they now support the creation of charter schools.

Charter colleges could offer specific majors or they could be "core curriculum charters" that would offer "at least eighteen semester hours in ethics and the classics of Western civilization and of American thought." Core curriculum charter colleges could offer great books seminars including courses on the Bible, ancient Greece and Rome, Renaissance and Reformation, and the American tradition: Students in that last course could study works including the Federalist and Anti-Federalist Papers, the Declaration of Independence and the Constitution, Jefferson's Notes on the State of Virginia, Tocqueville's Democracy in America, Thoreau's Walden, and Booker T. Washington's Up from Slavery.

Charter colleges would receive per-student funding as charter K-12 schools now do. They could rent space in university buildings. Their liberty would be limited: They would have to be nonpartisan and nonsectarian in terms of control by religious institutions. They would have to offer a viable business plan, a governance structure satisfying the principles of professional responsibility and academic freedom, and a set of procedures and standards for hiring and retaining instructors. Whenever the government cat stalks the premises, intellectual mice cannot play as freely as they otherwise might.

Nevertheless, the development of a charter college system would end the hegemony of the bureaucratic, central-planning model of higher education that has grown up during the last 60 years. Competition would improve the quality of education at state universities by ending unchecked and innovation-stifling educational control by faculty majorities. Competition would push academic specialists to consider the interests and goals of students instead of offering fragmented and hyper-specialized courses that merely fulfill their own research objectives.

We need campus glasnost: more intellectual diversity and free speech. We won't achieve it without a thorough perestroika that allows room for moderates and conservatives as well as liberals and radicals.