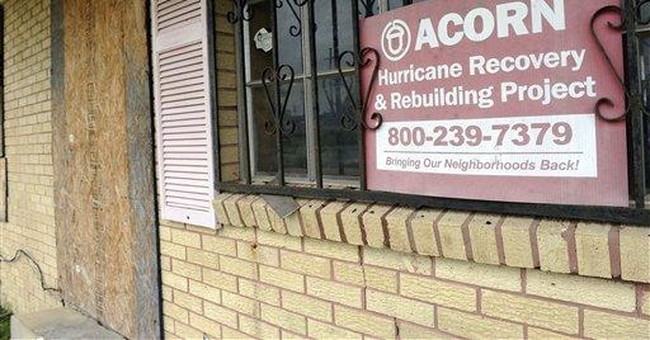 My last column was about online education and the opportunity it affords to end leftist rule in academia. Now, let's look at the other citadel of secular liberalism, media, and see how the recent cracking of ACORN shows why outsiders, including Christians, have the best opportunity in almost two centuries to become journalistic leaders.

In case you missed it, 25-year-old video journalist James O'Keefe and 20-year-old Hannah Giles captured on film ACORN employees in five cities explaining to them how to use taxpayer funds to buy a house to use as a brothel employing under-age girls from El Salvador. ACORN's advice included: Claim the prostitutes as dependents so as to collect the child tax credit, and have the adult hookers list their occupation as "freelance performing artist."

Internet entrepreneur Andrew Breitbart masterminded distribution of the videos, which went viral to such a point that eventually even the august New York Times had to take notice. Both branches of Congress felt the heat and voted to defund ACORN: The "community organizing" group had received tens of millions over the past 15 years and was in line to get much, much more because of its tight ties with President Obama. (Watch for some quiet congressional attempts to restore ACORN's funding.)

So what? Well, for 25 years I've heard thousands of complaints from Christian conservatives about the liberal press. They said we can't compete with television networks and big newspapers unless we're willing to pour in hundreds of millions of dollars. That once was true, but today we can't compete with big liberal newspapers unless . . . unless we're willing to pour in . . . hundreds. The ACORN videotaping reportedly cost less than $2,000.

The exposing of ACORN was a journalistic gusher, and those are rare. Some Christians would take issue with O'Keefe and Giles posing as a pimp and hooker: Should journalists be deceptive in that way? That issue requires more discussion, but it's not crucial to my point that the internet has opened up astounding possibilities for doing a lot with a little—and it's moving us into a new era for American journalism, one in which Christians can compete as we have not done in a major way since the mid-19th century.

Organizationally, American journalism has had two major eras, each lasting for about 150 years. Christians dominated the first, which went roughly from 1680 to 1830. As I noted two decades ago in a history book, Central Ideas in the Development of American Journalism, most colonial newspapers were explicitly Christian, and one survey in 1830 showed that three-fourths still were.

One reason for Christian dominance of the press: Most Americans adhered to a biblical worldview. A second reason: Printing presses were expensive and prospective editors typically needed the backing of what today we would call a nonprofit organization, often a church-related group. Newspapers and magazines relied on donations, not circulation and advertising.

In the 1830s the Christian worldview came under greater challenge from deists and transcendentalists. At the same time price cuts for printing presses and easier distribution because of urban growth reduced barriers to entry. Nonprofit publications relying on donations gave way to entrepreneurial investors and managers. Their business model was to sell newspapers for only one cent each, build big circulations, and sell those readers to advertisers, who would furnish the bulk of the newspaper owner's profit.

That model worked. The new journalistic leader, Horace Greeley, was a communitarian who hired Karl Marx as his European correspondent. In the 1850s Greeley's New York Tribune became the leading newspaper in the United States. Others imitated it. Soon the leading newspapers were all secular and, sooner or later, heading left.

Conservatives complained, but the cost of building a competitive production and distribution network created huge barriers to entry. In the 21st century, though, those barriers have crumbled under electronic attack. Many newspapers have gone or soon will be going out of business.

So now is a great time for Christians to support young Christian journalists. Build programs that educate them in biblical understanding and train them to write, do video, and produce terrific websites. Give the kids enough money to eat peanut butter and fumigate the roaches. Right now we have the opportunity to change the path of journalism for the next 150 years.