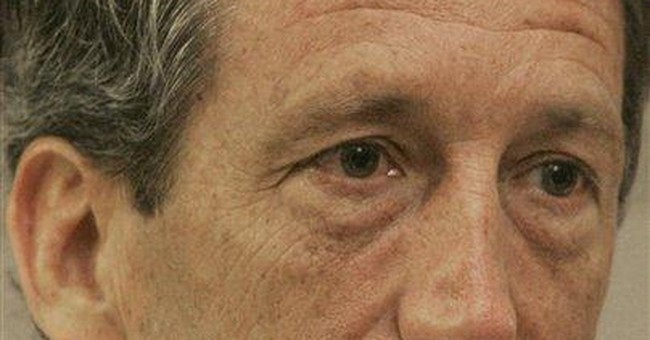 Plato wrote, "Give me the songs of a nation and it matters not who writes its laws." Would a modern corollary, for many Christians, juxtapose songs, films, and even television miniseries against the teachings of the Bible? I ask that question while reflecting on the tragedy of South Carolina Gov. Mark Sanford, and what it tells us about ways in which Christians and non-Christians are similar and different.

One similarity: The power of the riptide. Sanford in June 2008, as he was already in water over his head, wrote to the Argentine subject of his affections that he had "crossed lines" he never would have imagined crossing.

"Lines," plural, is right. An old math joke has a professor telling his student, "You can sit near your girlfriend and move half the distance to her, and then half the remaining distance, and then half again and again, but you'll never be right where she is." The student responds, "True 'nuff, but I'm close enough for all practical purposes."

If it were just one clear, unmistakable line to be crossed, Sanford might not have ruined his marriage. But this gross sin, like all others, undoubtedly started in easy crossings of lines that seemed dotted rather than solid. Sometimes we don't realize we've swum into a riptide until we're pulled out to sea.

But sometimes we do realize what we're doing, and here's where cultural products have such an effect. A telling line from Sanford's email: "I better stop now least [sic] this really sound like The Thorn Birds—wherein I was always upset with Richard Chamberlain for not dropping his ambitions and running into Maggie's arms."

The Thorn Birds: a melodramatic TV miniseries (based on a Colleen McCullough novel) first broadcast on ABC in 1983 and now available on DVD. Richard Chamberlain: He plays a character who puts his career ambitions above illicit love. Result: Misery.

I don't know when Sanford saw The Thorn Birds, but that it came to mind at a crucial time shows how the pictures in our heads can sometimes influence us more than the words of the Bible, even when we know the latter to be true. Sanford in his email describes "what we both have to see as an impossible situation." He quotes the Bible. Then he evidently remembers the moral of The Thorn Birds: Walk away from love you know is wrong, and you'll be miserable the rest of your life.

People magazine about 15 years ago listed the "100 top romances of the 20th century." Over half were adulterous, but People treated all of them as glorious. More pictures in our heads.

What's missing in Sanford's emails was reliance on Christ. The riptide analogy: If you're caught in one and try to swim directly toward shore, you'll just tire yourself out fighting against the riptide's power—and you might drown. But if you keep your head and rely on God's providential limiting of the riptide's breadth, you'll know that by swimming parallel to shore you can escape the water's pull and make it home safely.

Sanford did what all non-Christians and many Christians do in emergencies: He depended on his own strength and his own judgment, twisted as it had become. He was lost. When it was too late and he faced the press upon his return to South Carolina, he said truly that "God's law" is designed to "protect you from yourself"—but at a crucial time he forgot that, as we all do at times.

But here's one way Christians are different from non-Christians: We're bad liars. When caught, we confess rather than stonewall.

Reactions from secular liberal strategists late last month were telling. One Huffington Post pundit said of Sanford, "The executive leadership he showed in confessing to his sins . . . was really bad." Democratic politico Steve McMahon said on MSNBC's Hardball, "What I would have suggested is that he put out a statement which says: My wife and I separated two weeks ago. I left the country to have some private time, and I'm not going to have any anything further to say about it."

Christians tend to follow a different strategy, known as "confession," because we know that part of God's hard mercy is bringing into the light what we try to do in darkness.