Mark Nuckols
|
Posted: Apr 15, 2016 12:01 AM
Share   Tweet
The opinions expressed by columnists are their own and do not necessarily represent the views of Townhall.com. 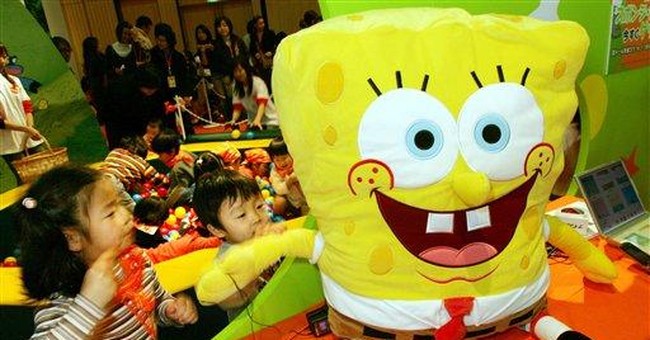 How many episodes of the hit Russian comedy series The Matchmakers have you seen? I am guessing zero. And for good reason, like all Russian TV series, it’s an abysmally bad copy of an American original. In this case, think of a very low rent version of The Love Boat, without the boat. (Incidentally, I had a bit role on one episode.)

If you haven’t spent much time outside the United States, you might not realize just how dominant American pop culture is around the world. A majority of children across the globe love Spongebob. There is virtually no male over the age of twelve on any of the six inhabited continents who has not seen The Terminator at least three times. And Michael Jackson is still the most popular musician in almost every country outside the U.S.

This drives some people crazy. French bureaucrats in the Ministry of Culture enforce a law that at least 40% of songs on the radio be in French language (even as 80% of French pop stars record in English). Nationalist politicians in Russia have for some time been trying to pass new legislation requiring cinemas to show more Russian movies (and fewer American ones).

The simple fact is that most people around the world prefer American pop culture to their own. And there are very good reasons for this.

The production values and special effects of American TV and film are unparalleled. Acting skills are far better, in part because many of the best actors worldwide want to work in Hollywood. And American screenwriters are just plain better at storytelling.

America also invented almost all the most popular musical genres worldwide. Jazz, blues, country, rap, hip-hop all sprang from the American musical imagination. And while the British played a role in founding rock-and-roll, America perfected it. (And yes, reggae is Jamaican.) And American songwriters have the “it” that makes people want to listen to a song, something other countries just can’t easily duplicate.

Part of the explanation is simple economics. America is the biggest pop culture market in the world. Hollywood and the music business enjoy economies of scale and a massive home audience that allow for production budgets unimaginable anywhere else.

But there is another element at work: the appeal of the American Dream. People around the world see America as a land of liberty, optimism, prosperity, and happiness. For example, many Russians I know loved Friends because it represented what they thought the good life should be.

Conversely, Russian movies are downers. Of the five Russian films of the last twenty five years that were worth watching, they all dealt with the depressing poverty and violence of life in Russia. And the most popular music group in Russian history was a faux Jamaican outfit called Boney – M. I don’t care if what your musical tastes are, if you youtube “Boney-M Rasputin” you’ll agree America never, ever produced such a cringingly awful music video.

Now, it is true that one man’s Bob Dylan is another man’s Wayne Newton. The first time I heard a Katy Perry song in a Moscow bar I thought it was some god-awful Belorussian girl group. And the Hangover made me hang my head in shame that the country that made The Godfather and Casablanca could also produce such drek.

And there are some very good foreign film makers and musicians. The Wages of Fear (France, 1953) is one of my all-time favorite movies. And I love the ballads of Djordje Balasevic, the legendary Serb singer.

But the simple fact is that nobody rivals America when it comes to pop culture. There is a genius to American culture nobody else has. Could a Frenchman come up with the exuberantly brilliant Jackass? No. Could a German studio produce something as compellingly gripping as The Sopranos? No again.

And the ubiquity of American pop culture around the globe is an important source of “soft power.” There are plenty of people who disagree with the foreign policies of the United States or who dislike America’s leading role in the world. But most people still admire, even if grudgingly, America and the values she stands for, as reflected in her films and music.

America’s unsurpassed pop culture is just one more reason why America is the most awesome country in the world. Most of the rest of the world knows this. More Americans should likewise appreciate what a great country we have.