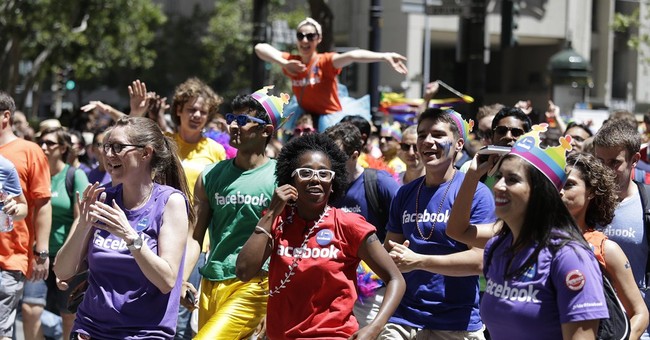 America, it’s time you get used to some new officially mandated personal pronouns in addition to quaint old “he” and “she.”

The University of Vermont is now the first university in America to officially recognize a “third” gender, neither male nor female but “neutral.” Now, during the Cold War Finland was “neutral,” beige can be considered a “neutral” color, and I put my car in “neutral” when I’m waiting at a stop light. But do we really need a “neutral” sexual gender in addition to the two we already have?

UVM created a task force of students. faculty and administrators and developed a new software program to implement this, uh, urgently needed innovation. Henceforth, UVM students can choose one of three genders, whatever name they wish to be called regardless of their legal one, and they also get to choose by whichever pronoun they wish to be addressed.

You see, if you’re neither boy or girl but “neutral,” obviously the existing pronouns “he” and “she” just won’t do. Someone proposed that “neutral” students be addressed as “they,” but the faculty quite logically insisted that single persons can’t be addressed by plural pronouns, unless they’re English royalty.

So among the various choices is “zie,” as in “Zie is a first year student, I saw zim in class, and borrowed zir book, it’s zirs. Zie calls zirself Rocko.” No, I am not making this up, UVM has even distributed handy pocket-sized cards describing the new grammar rules.
CARTOONS | Steve Kelley
View Cartoon

A story in the New York Times focuses on UVM’s first out, loud and proud “neutral” student whose name is Rocko Gieselman. Rocko was born female” and “accepts having a womanly body.” She has a partner who “was born female, feels female.” Geiselman “dumped the girly name bestowed at birth” and asked friends to start using the tougher sounding “Rocko.”

Gieselman describes her long journey to gender neutrality or “genderqueer.” (You’re going to have to learn a lof of new vocabulary, my old fashioned “binary” fellow citizens.) Early on being referred to as a “girl" or a “lesbian" grated on Rocko’s nerves. “It was like, 'who are you talking to?’”

Being a “boy” didn’t feel right either, even though Gieselman tried wearing “masculine” clothes and asked friends “to call me Emmett.”

Gieselman describes having an epiphany one day at the local trans and queer center when she (sorry, zie) learned about this third new genderqueer neutral gender. “I was like, ‘Oh, that’s the one.’”

But making progress is hard in our flawed heretofore binary culture. UVM is bravely dealing with a host of thorny problems. Neutral students might be fearful of using bathrooms dedicated to use by“men” and “women,” which certainly is the civil rights issue of our times. One UVM administrator relates how one transgender freshman was “distraught” when a professor inadvertently referred to her (oops, zir) feminine legal name before using the preferred male nickname.

If this was an installment of the comic strip Dykes To Watch Out For, it would actually be kind of amusing. And if some college students think it’s ultra-outre to start referring to themselves with invented pronouns, I really have no objections whatsoever. I myself prefer people address me as Wladislaw, Grand Prince of Poland and Lithuania. Hey, whatever makes you happy, right? But the crucial distinction is that I don’t demand society at large to do so.

I personally believe gay people are entitled all of the same legal rights as straight people, including the right to marry one another.

But with all due respect, however much Gieselman and other students may feel “male” or “female” are terms insufficient to capture their special sexual identity, they wish to take a personal quirky idiosyncracy and make it into an officially approved designation that the rest of us are obliged to recognize.

Gieselman seems to be a perfectly nice and charming person, by the way. But she (zie) also seems to be a young person who is both a bit confused and more than a bit full of herself. And UVM and the many other schools considering going down this path are greatly mistaken in bending over backwards to accommodate every little whim that people are sometimes prone to demand, no matter how silly. It’s a needless distraction at best, and a form of social blackmail at worst.