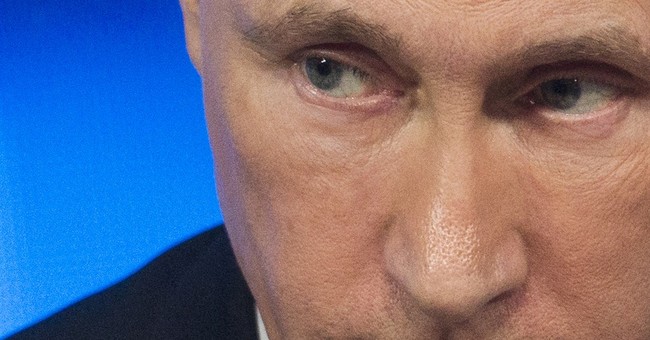 Russian President Vladimir Putin has been riding high for most of 2014. First, in February he basked in the prestige of presiding over the Winter Olympics in Sochi. Then in March, he sent in his “little green men” to occupy and illegally annex the Ukrainian province of Crimea. Putin’s stature among the Russian public soared as people felt Russia had earned a long overdue military triumph over its Western foes.

The only cloud, barely visibly in the distant horizon, was Maidan. Maidan is the name of the central square in Kiev, and this square gave its name to the grassroots protests that drove Ukraine’s corrupted and incompetent President Viktor Yanukovych from his seat of power into exile in Russia. Putin has been infuriated that a popular revolt by ordinary citizens could succeed at turfing his puppet from office.

Putin is deeply concerned that his own subjects may learn from Ukraine’s example and that Maidan II will someday come to Moscow. Putin stands at the center of a web of corruption and fraud that has benefited him and his cronies at the expense of the Russian public. However, as long as oil prices went up almost continuously over the past 14 years of his reign, there was enough money to feed the “kormushka” or feeding trough for his supporters and to increase pensions, government salaries and social spending as well.

Now the money spigot is running dry. Half of Russia’s budget and a quarter of GDP comes from oil and gas. The price of Russian oil has dropped by nearly half and gas prices are following suit. And the fall in revenues from oil and gas has driven a fall in the ruble, which from June to November was a sobering 30 percent. Compounding Russia’s financial squeeze are the financial sanctions imposed by the U.S. and the E.U. in response to the illegal annexation of Crimea and Russia’s involvement in fomenting a civil war in eastern Ukraine. Some of the biggest and most important companies in Russia, like oil giant Rosneft, have been cut off from funding from American and European banks. And these companies have hundreds of billions of hard currency debts they now need to roll over at the same time their profits are crumbling.

The continuing decline of the ruble has turned into a rout in the last week. In a desperate ploy to support the ruble, the central bank raised its key interest rate from 10.5 percent to 17 percent. However, that failed to halt the ruble’s slide, and the Russian currency is now 50 percent lower than it was six months ago. But at the same time the central bank was raising interest rates to levels that will choke off already weak economic growth, it also engineered a shady deal to help Rosneft with its debt burden. Rosneft surreptitiously sold $10 billion worth of ruble bonds to local Moscow banks, who in turn pledged them to the central bank in exchange for their money back. In effect, the central bank has unofficially adopted a policy of refinancing the debts of state owned corporations by issuing massive amounts of new rubles.

So far the Russian public has been stubbornly defiant in denying any ill effects of the collapse of both the ruble and the price of oil. It is denial of hard economic facts. Most people believe that Russia will not suffer from devaluation. It’s an illusion because Russia doesn’t produce either many food products or consumer goods, it has to import them. And those imports have practically overnight doubled in price, so inflation will erode consumer purchasing power at the same time the government has to drastically cut spending. The central bank’s new forecast of a 5 percent drop in 2015 GDP may turn out to have been wildly optimistic.

When the Soviet economy collapsed in 1991 the Russian public passively accepted grinding poverty as just another inevitable burden to bear. In the 1998 economic catastrophe, the public again just shrugged their shoulders at government incompetence and corruption. This time may be different. It is a truism of history that revolutions aren’t sparked by dire poverty, but rather by confounded expectations. Most Russians have in the last decade gotten accustomed to rising incomes and access to high quality and affordable consumer products

The risk for Vladimir Putin is that as the euphoria and sense of pride from the “conquest” of Crimea wear off, the new Russian middle class may not so meekly accept the cesspool of uncontrolled corruption and gross incompetence by their rulers if it is accompanied by the disappearance of the reasonably decent standard of living they have become accustomed to. If economic conditions continue to worsen significantly, Maidan II may soon come to Moscow, marking an early end for the Putin system.