Mark Meckler
|
Posted: Apr 14, 2016 12:01 AM
Share   Tweet
The opinions expressed by columnists are their own and do not necessarily represent the views of Townhall.com. 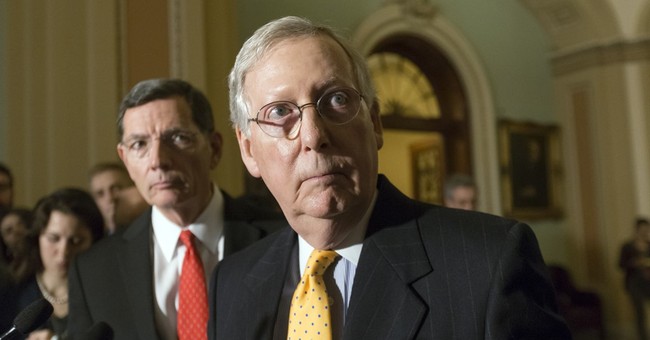 You can go back and read that again. Yes, I really said it. And believe me, this wasn’t an easy thing for me to do.

On behalf of Tea Party grassroots supporters and myself, thank you for doing the right thing by standing up for the U.S. Constitution, the rule of law, and giving the people a voice in the future direction of the Supreme Court based on the 2016 Presidential and Congressional elections. We cannot allow a lame duck, radical leftist President select a justice who is going to help "fundamentally transform" America to suit the far left’s agenda.

I’ve been very honest about the many times I’ve disagreed with the establishment, but these two politicians are doing the right thing now. They are taking the right approach by holding courtesy meetings with Merrick Garland to inform him that there is no chance of holding hearings. Their leadership on this issue will prevent a liberal judge with liberal ideas from becoming Obama’s parting gift to the nation. Garland’s anti-first and second amendment record shows that the Constitution is in serious danger of unraveling should he be appointed to the bench.

Unfortunately, this should be a simple issue. This shouldn’t even be a fight. In fact, President Obama, Vice-President Biden, Senator Minority Leader Reid, and others are all on record supporting what is now the common-sense GOP position.

There are some who believe that the president, having won the election, should have complete authority to appoint his nominee and the Senate should only examine whether or not the justice is intellectually capable, and an all ­around good guy. … I disagree with this view. I believe firmly that the Constitution calls for the Senate to advise AND consent. I believe that it calls for meaningful advice and consent that includes an examination of a judge’s philosophy, ideology, and record."

In 1992, Vice-President Biden laid out what is now an ardent defense for what the GOP is trying to do:

As a result, it is my view that if a Supreme Court Justice resigns tomorrow, or within the next several weeks, or resigns at the end of the summer, President Bush should consider following the practice of a majority of his predecessors and not--and not--name a nominee until after the November election is completed. …

Instead, it would be our pragmatic conclusion that once the political season is under way, and it is, action on a Supreme Court nomination must be put off until after the election campaign is over. That is what is fair to the nominee and is central to the process. Otherwise, it seems to me, Mr. President, we will be in deep trouble as an institution.

There are countless other quotes along this vain from Democrats who are now urging Republicans to “do their jobs” instead of deferring to the American people. This is an absurd argument given how many of our elected representatives do the bidding of corporations and lobbyists instead of the everyday American people.

But what should be celebrated and encouraged is the leadership from Majority Leader McConnell and Chairman Grassley. I urge Sens. Manchin, Bennett and Heitkamp to look at how Garland’s record impacts their constituency and follow suit.

Just look at how divisive the campaigns have become. Just look at how many issues the Supreme Court rules on that it has no business ruling on. Whether bureaucrats can control our lives, whether the Constitution is ripped to shreds, whether freedom is still around for our children to enjoy – all of these things (and more) are at stake.

Grassroots activists, McConnell and Grassley are fulfilling their job responsibilities and deserve our praise for taking a stand.