Mark Davis
|
Posted: Apr 02, 2019 12:01 AM
Share   Tweet
The opinions expressed by columnists are their own and do not necessarily represent the views of Townhall.com. 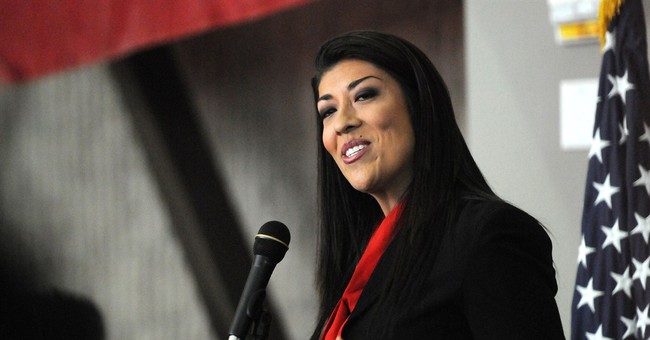 It is surely not her intent, but Democrat Lucy Flores, in triggering a wave of attention to Joe Biden’s handsy moments, may have torpedoed the only Democrat with a chance of beating Donald Trump in nineteen months.

The former Lieutenant Gubernatorial candidate from Nevada says she is sharing memories of their 2014 encounter because the behavior she describes is disqualifying.  She apparently believes a sufficient number of Democrats feel similarly, to the extent that Biden would be such damaged goods that Trump would win.  Because of this, she needs to make the TV rounds with her stories to prevent a candidacy the party would regret.

But what if she is completely mistaken?  What if Biden is, as many across the political spectrum believe, the strongest candidate the Democrats can offer up?

That assertion is under fire while we all figure out how damaging her story should be to a man whose tactile approach has been on display for years, with no stigma sufficient to derail his ascendancy to within a breath of the presidency.

In the #MeToo era, sensitivities have been properly heightened to a long list of behaviors men used to deploy with impunity.  Those days appear over, which is a good thing.  No one, including Ms. Flores, says Biden is guilty of anything remotely approaching the Weinstein-Lauer-Moonves-Cosby scale of offense.

But her story is one that many women might have shared over the years, and more sharing may be on the horizon.  They would be the stories of women whose ears have been whispered in, whose shoulders have been rubbed, whose hair has been sniffed, whose heads have been kissed, and in the most recent revelation, whose noses have been nuzzled by Joe Biden.

Compared to the horrors endured by victims of the famous names shot down in flames lately, Biden’s inappropriate touchiness might seem dismissible.  And that’s what some women did— they dismissed their episodes because it’s not as if they were sexually assaulted, they might be publicly doubted or mocked, and he’s one of America’s most powerful politicians.

But the more I heard Ms. Flores’ story, the more it struck me how ridiculous it is that an apparently smart man still thinks this is permissible, and more starkly, that no one close to him has ever told him to cut it out.  Or if they did, he ignored them.  This is not okay, and if this is the moment in history when men learn not to invade women’s personal spaces, then that’s a good thing too.

But to the matter at hand, immediate questions arise:  should this destroy the potential Biden presidential candidacy, and is Ms. Flores shooting straight with us on why she is attempting to do so?

No one can read her mind, but we can note her political tastes.  She was an endorser of Bernie Sanders in 2016 and an attendee this past weekend at the Beto O’Rourke kickoff rally in El Paso.  So is her affinity for Bernie or Beto fueling a desire to sabotage their strongest competition?  She has revealed her frostiness toward Biden’s insufficient cheerleading for Anita Hill and his occasional moments of leaning away from full abortion rights.  Is she concerned about a weakened Biden losing to Trump, or a strong Biden defeating her favored candidates?

Since that is unknowable, let’s pivot to the big question that may ripple across our nation’s history:  Is Joe Biden toast before he even announces?  Does he deserve to be?

Having established proper disdain for his serial incursions, I nonetheless cannot suggest that he should face political ruin.  Let him run if he wishes.  If voters decide these past habits are a deal-breaker, then let’s find that out in real elections.  Haven’t we had enough of today’s instant guillotines of reflex outrage?  Especially in this case, where the outrage seems so opportunistic.  Everyone of both parties sounding oh-so-serious about these new revelations has been aware of Cuddly Uncle Joe for years without any serious suggestion that he is unfit for high office.

So, to conclude, Democrat Lucy Flores wants Biden out because (she says) she fears his flaws would render him unelectable.  And here I am, a conservative arguing Biden should stay in even though I view him as Trump’s toughest competition.

Today’s Democrat power structure surely knows Biden’s strengths, which is why they may join in throwing him under the bus.  They may view Trump as so vulnerable that any one of a dozen or more Democrat candidates could take him out, affording them the luxury of elevating a newer, angrier, more radicalized candidate who echoes the party’s leftward lurch.

Many things are plausible a year and half out from an election.  But whether a Biden presidential run is a doomed exercise or the Democrats’ strongest hope, it is better for voters to make that decision next year than for knee-jerk posturing to deliver a campaign death blow this month.