Mark Davis
|
Posted: Nov 14, 2016 12:01 AM
Share   Tweet
The opinions expressed by columnists are their own and do not necessarily represent the views of Townhall.com. 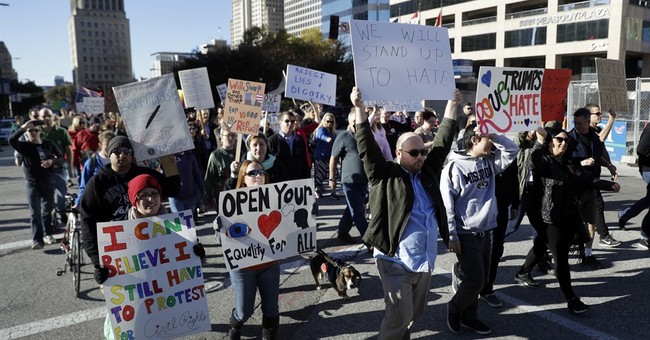 The aftermath of the election fills me with a peace and gratitude I cannot quantify. Several times each day, I pause as a small voice reminds me: “We have saved America. Our nation will be safer and more prosperous because of the will of the voters. Our Constitution will be spared the savagery of judicial tyranny; our immigration policies will resist incursions of illegals from the south and terrorists from the Middle East; the people have risen up against a sorry elite establishment status quo and demanded a new direction.”

Some people, however, are not as happy.

I understand this all too well. My candidate lost four of the previous six elections. In 2008, I feared for my country’s direction. As the Obama years whimper to a close, my concerns have been fully realized. But at no point did I twist off on perverse rants that evil voters had somehow elevated an evil man. And I do not recall an urge to take to the streets to smash plate-glass windows and set fire to stuff.

Were there slivers of America that reacted to the Obama wins with inappropriate invective? There were. But they surely did not drive multiple nights of sympathetic TV coverage. No one told America to pause to “understand” the bitterest Obama critics. There arose no safety pin campaign to symbolize protection from his reckless spending, his environmental extremism, his porous borders. If memory serves, we dusted ourselves off and coped.

Of course losing is hard. With my first presidential vote, I tried and failed to prevent the Jimmy Carter presidency. In a 20-year span, I tried to stop two terms each of Bill Clinton and Barack Obama. Didn’t work. I get it. And this loss is a jolt to millions. If you are a Democrat voter approaching 30, you have never lost a White House.

But that cornerstone of maturity—coping skills—is dying before our eyes. Democrat disillusionment after the Hillary Clinton loss is to be expected. They thought they had this, and so did many Republicans. (This was not, however, an “upset.” The signs of a Trump win were everywhere for more than a year: his rocket ascent, his huge crowds, the bold assemblage of a new coalition of voters yearning for real change. Hillary Clinton was a terrible candidate who never sparked more than middling enthusiasm. An upset is when a candidate, or sports team, succeeds despite objective expectations. The only factor driving expectations of a Hillary win was the now-discredited narrative of pollsters.)

But this spectacle of hand-wringing is emblematic of a far deeper American pathology: the utter childishness of large swaths of our society. It is confirmed by the whining, the crying, the failure to accept reality, the venomous tantrums to be found from college campuses to Hollywood movie sets. Our unhealthy instinct to protect our third-graders from sports losses has now borne poisonous fruit. The streets are now filled with third-graders in the bodies of young adults, unable to remotely grasp a most normal and recurring event in life: a presidential election loss.

It is not just millennials coming apart at their already threadbare seams. Actors who ask us to fund their various and often unsettling fictions are making it clear they will not accept the real-life plot playing out according to the will of millions of their countrymen. I have long accepted the liberal flavor of pop culture, but there is something particularly sad about watching tough-guy emeritus Robert DeNiro melting down like a jilted debutante.

Let’s ramp down from rioters and Hollywood millionaires, venturing into our own relationships. Conservatives, say it with me: “I have liberal friends.” They are some of my more interesting friendships, showing year in and year out that some things transcend politics. That is an uplifting thing, particularly reassuring during this most sharp-elbowed political year. I have enjoyed thoroughly convivial exchanges with many such friends.

Then the election actually happened.

It’s not as though any of them have become directly personally nasty to me; most have just fallen silent, and I am giving them room to grieve. But in that eternal soup of unvarnished emotion that is social media, I am learning what they think of me, and of many of you.

They post angry sobs about how this execrable man has been anointed by millions of racists, xenophobes and misogynists, a knuckle-dragging horde of voters seeking validation of their venal hatreds.

Really? And we just had coffee.

This is a dissociative disorder of troubling severity. Slander toward politicians is a national sport, but this level of hate spewed at millions of Americans for daring to differ with their orthodoxy? That’s a disease.

The media culture coddles it, of course, empowering various stories suggesting how the wounded little cupcakes might survive the spectacle of the Trump win. And that’s the grownups. How many children are being emotionally crippled at the sight of Mom and Dad clutching pearls and getting the vapors just because Donald Trump will be our 45th President?

There is no doubt that for the left, this is harder to take than a loss to almost any other GOP contender. A Rubio win would not have sparked rioting. A Jeb Bush win would have been a relief for them. A Ted Cruz win would have meant a conservative fighter would have taken the oath of office, but the Trump win is the turret of an Abrams tank aimed right their various sacraments: Obamacare, weak borders, waves of Mideast refugees, sanctuary cities, and far more. On an issues basis, liberals have plenty to worry about.

But their despair digs down far deeper. They have taken to heart the mantra that they do not merely differ with conservatism; they lord over it morally, knowing that their views are not simply half of any national debate; they are the only humanly decent half.

This kind of arrogance comes with a cost. It means the pain will far exceed the rational reaction to a lost election. There can be an accompanying fraying of relationships, because who seeks to bind with odious people?

This spectacle is not just political, it is societal. A lack of coping skills can make a teenager snap into violence at school, or prod a fired employee to exact vicious revenge in the workplace. This is not to suggest that crestfallen Hillary voters are about to fill the headlines with shooting sprees, but some have surely chosen to endanger people and property with their adolescent furies.

At the very least, we have to figure out how to deal with such dysfunction. It cannot be tolerated or indulged; that merely encourages the next angry snowflake to seek validation. Better to encourage and reach out to anyone finding a path to internalize the election like a grownup.

Against the backdrop of showbiz crybabies, it was downright heartwarming to watch Saturday Night Live host Dave Chappelle offering to “give Trump a chance.” (This was, however, mere moments after the brilliant Kate McKinnon, mourning the evaporation of the marketplace for her Hillary impersonation, was relegated to a maudlin slog through the just-passed Leonard Cohen’s “Hallelujah.” SNL has often offered a tone-perfect open in the wake of tragedies in the news. Apparently they thought this was one.)

This extends even to the NeverTrumpers and other Republican laggards. I have to admit, it’s hard to absorb former haters like Senator Ben Sasse now finding the capacity to tolerate Trump, or the infuriatingly tepid Paul Ryan suddenly beaming with enthusiasm. We could have used these guys, and thank God we did not need them

But from the halls of Congress to the cubicles of punditry, those who were so disastrously wrong have two choices: get smarter in a hurry, or not. Those who seem to have actually learned the extent of their blindness should be met with the grace they did not show us.

It is surely tempting to assemble a list of obstructionists worthy of a scolding for the ages. But that does not harmonize with a column holding up the attributes of maturity and decorum. So let’s make this a time of healing. If this has been a season of ugly derision from those on the left and right unable to cope with Trump, let us rise above it with behavior that bespeaks a higher standard.

I, for one, am so thrilled at the rescue of my country that my joy consumes most of the retorts I might level, even at those who are maligning me and the people like me who engineered that rescue.

So the old hymn lyric feels right: Let there be peace, and let it begin with me.

But I still have no idea when I will read George Will again.