Another Ebola Risk: It Eats Logic 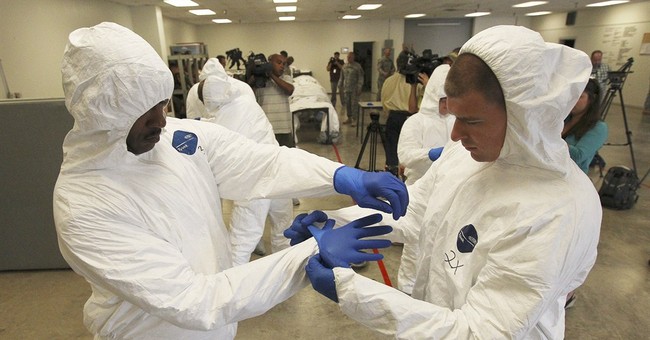 Reading the bio alongside Steven Bucci’s Daily Signal piece on the Ebola-inspired Liberia travel ban made me want to meet him and shake his hand. He “served America for three decades as an Army special forces officer and top Pentagon official,” now serving as director of the Allison Center for Foreign Policy Studies at the Heritage Foundation.

Military Hero. Heritage. How do I not love that? Yet oddly, his piece opposing a temporary block on incoming West African travelers struck me as completely wrong, so my usual instinct kicked in— to welcome him to my radio show.

His headline, “Wisdom Should Prevail Over Panic,” suggests he is the wise one and I am panicking. I asked him why he would attach a “panic” label to the large number of Americans advocating the disallowance of incoming LIberians:

SB: Because frankly you are then excluding a ton of folks who are not posing any danger to anyone, you’re really hurting the economies of those countries, when they’re already teetering on the brink, frankly.

MD: So because of concern over the fragile economies of West African nations, or the slight that we may inflict to thousands of people who pose no risk— because of those, we need to say, “Hey, just in from Monrovia? Come on in!”

SB: The biggest reason is those kind of bans have historically been proven to not do what they promise to do. They don’t give you the level of protection as a society, whether it be a city or a country that it seems intuitively they would.

MD: Well, what’s an example of one where everybody thought our level of safety would go up, and it did not?

SB: If you do the analysis after the 1918 Spanish flu, which was like the worst pandemic ever… there were communities, cities in the United States that tried to do that, they tried to basically wall themselves off, keep everybody else out, keep all of their people in, and the disease made it in anyway.

MD: But these are American cities… where freedom of passage, and roads, and— I can’t imagine walling off a city. In no way is that analogous to what a country can do. We are absolutely able to monitor who comes into and out of our country. Liberian passport equals you’re not getting in.

SB: Looking at this particular outbreak, the country of Sierra Leone started, after they had one case that came in, they said, ‘Okay, nobody else is coming in our country’… and it failed, it failed miserably, and they wasted a ton of assets trying to do it, instead of putting the assets against the more useful population distancing and mitigation…

Here’s what was so peculiar: Mr. Bucci had several ideas that were thoroughly valuable in terms of what West African nations can do, and what we can do, to minimize the spread of Ebola. I had no quarrel with any of them. What was disorienting was the enormous pushback— from a conservative!— with logic pulled straight from the index cards of the left. I returned to his curious notion that an American attempt to stop incoming Liberians would be as failed as the Spanish Flu barriers of 1918 or the sparse border controls of West Africa.

MD: We absolutely have the ability to say “If you have a Liberian passport, you’re not coming in.” Try to tell me why that’s not a good idea.

SB: Because it will waste assets and it will not work.

MD: What assets are wasted?

SB: All of the stuff you have to do to make sure that happens.

SB: Okay, are you going to do it for Spain, too?

So we returned to the other premise against the travel ban— that “it will not work.”

MD: How does that, purely mathematically not work?

SB: All the epidemiological studies that have been done by the CDC and these other public health professionals, who are not terribly panic-ridden…

Again with the panic. Getting the theme? It is a sign of delusion to remotely suggest that the CDC may be politically or attitudinally restrained from delivering full honesty. But he continues:

SB: Their point is you can better deal with these things, by one, breaking the outbreak where it’s begun, over there, thats how you protect the world, and therefore increase our protection, and to do that the kind of bans that you’re talking about are counterproductive.

MD: How is that the case? How is doing what I’m talking about— saying no to Liberian entries— how does that hinder the admittedly praiseworthy things that you’re mentioning?

SB: Because it will not give us the protection tat you think it will give us.

Well, apparently they are teaching mind-reading in the Special Forces. Mr. Bucci thinks he knows the level of protection I expect from a travel ban. For those less clairvoyant, I will reveal that I have no idea of the exact level of protection a Liberian passport stoppage would offer. But I know that whatever it is, it is wise. Whether it stops one Ebola-positive entry or one hundred or one thousand, it is a reduction compared to what we would otherwise have.

And don’t talk to me about this ridiculous fever-detection technology in various airports. A fistful of Motrin will keep body temperature under control until the new arrival is well within the American city of his choice.

In his opinion piece, Mr. Bucci quoted CDC chairman Tom Frieden, who set up a straw man a freshman philosophy student could recognize: “I wish we could get to zero risk by sealing off the borders, but we can’t.”

MD: No one is suggesting that the risk can be brought to zero. But mathematically it is true, risk will reduce if we say no to entries from the country that is the absolute ground zero for Ebola.

SB: The trade-off is not worth the added benefit.

MD: So you’re admitting there is a benefit. On the other side of the scale, the things that make it, on balance, not worth doing— so far I’ve gotten concern over the West African economy— what else was there?

SB: That it will essentially cause this outbreak to last longer and get bigger—

MD: How does that happen? That saying no to Liberian entry to America increases the outbreak?

SB: it will cause the efforts there to fight the outbreak to take longer and be less effective.

MD: How? How does that hamper Ebola fighting over there?

SB: Because the flow of goods and services in and out will be hampered, because when the United States does it, everybody else in the world will piggyback on it, and you will hinder the ability of the public health people to get assets in there—

MD: Not at all. Military assistance, charter flights going over there to help…that’s something we can do. My specific question is: how does saying no to Liberian entries over here hamper fighting it over there?

If you are sensing that I am asking the same question multiple times, you are correct. I do that when : a) I do not get an answer, or b) I cannot fathom the answer I am getting. We learn something no matter what happens, when the guest either relents and changes the answer or finds new ways to stick to his guns.

SB: It will not provide the benefit it is promising. You will give people false hope that they are protected…

No one has made such a suggestion. I ask why we should not do everything we can do to reduce risk to the American people?

SB: Everything that is going to be beneficial, and will not have other unintended consequences.

MD: I love you in a lot of ways, but there is not one unintended consequence that you’ve made the case for, not one.

SB: Well, we’d have to disagree on that.

And with that, I sincerely thanked this American hero who works for one of the greatest conservative think tanks in American history. With his history and his current business card, I would bet we would agree on twenty out of twenty other issues he has covered in his current post.

No matter its source, it is a flawed notion that America as a global citizen owes more to Ebola-stricken nations than we owe our own citizens.