What Ebola Has Revealed About Us 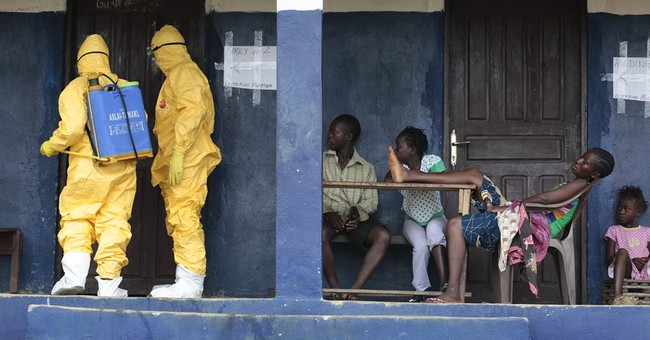 Welcome to Dallas, where we begin the week wondering whether our Ebola Patient Zero will die, and whether others among our neighbors will then follow due to various failures in systems that should keep us safe.

Last week was an exercise in reverse psychological physics. The more officials at every level told us to shut up and calm down, the more we felt like yanking our kids out of school or packing up the family for a month in the mountains.

This is not a complete collapse of faith in our institutions; it is a bad moment in history for government’s protection batting average, compounded by just enough local bewilderment to elevate public nervousness.

Begin with the backdrop as Thomas Eric Duncan arrived in our nation and my town, having lied about his plentiful exposure to Ebola back in Liberia. Officials from Washington to the Dallas County Courthouse told us everything was just fine and completely under control.

Really? As under control as our borders? As reliable as our battle against terror for the last few years? As secure as the White House perimeter?

This is not a good season for people from government telling us to relax.

Nonetheless, it is important to limit cynicism to deserved levels. The CDC seems to do an admirable job of monitoring countless health issues that never make the headlines. Here in Texas, state and local officials have a reliable enough record on matters of this type. As such, the slate started clean.

Things got squirrelly fast. Dallas County health officials listed as a prime goal the prevention of overreaction. Voices of supposed expertise at every level issued repeated enjoinments against disproportional fear.

But what exactly was disproportional? A man fresh from Ebola’s global ground zero had waltzed into America, reporting to a Dallas hospital, where he was promptly sent home with antibiotics after telling them he was sick and freshly arrived from Monrovia.

Our memories filled with the horrible prospects for most people who get this disease, we North Texans sat down for hours of non-stop Ebola coverage on local TV, augmented by the national networks loading their coverage with daunting titles and vivid logos from their art departments.

We heard that Mr. Duncan had come into contact with a dozen, a few dozen, maybe 100 total people before he returned to the hospital so violently ill that they actually admitted him.

We knew of schools where students had been gingerly removed from class. We heard of the quarantine plans for his family in a fetid apartment in East Dallas. After the inexplicable passage of days, we saw hazmat teams show up to blast those living quarters into some semblance of cleanliness— only to be turned away. Seems they didn’t have the right paperwork to transport the fabrics soaked with God-knows-what.

Family members who were told to stay put for 21 days of quarantine barely made it one day, opting to run some errands before police arrived to guard the doors. That family has now been transported to an undisclosed location, to the palpable relief of nearby residents who know their very lives depend on the proper handling of this crisis.

Those neighbors could not have been thrilled to see wholly unprotected workers power-washing the sidewalks which had run thick with Mr. Duncan’s regurgitations.

Add it up. A hospital completely bungles the intake of a patient with the most infamous disease of the moment. Federal officials tell us there is no cause for alarm, as if we do not recall the falsification of the AIDS risk, the wild overestimation of homelessness or the last few years of climate change fearmongering. Then local officials struggle mightily with the vital task of rapidly finding anyone who came into contact with Mr. Duncan, isolating them immediately and briskly, competently securing the scene that was the spigot for this entire nightmare.

But we surely do not need to be hosed and falsely restrained from concerns based on big gaps in Ebola knowledge.

Are we sure we know how this disease is transmitted? Mr. Duncan, before carelessly lying about his condition and endangering so many unsuspecting souls on planes and around Dallas, was apparently of sound enough character to help an Ebola-stricken pregnant woman seek treatment among packed clinics in Monrovia. Those efforts failed and she died after he and others returned her to her home. At no point has anyone described the specific fluid-to-fluid contact that experts say would have been necessary for her Ebola to infect him.

If you are uneasy amid all this uncertainty from your home or office in California or New York of Minnesota, try living a half-hour from this whole cluster. I am not getting calls on my radio show from citizens screaming into their cell phones running down the street in blind panic. I am, however, getting calls from people who are tired of being scolded for wondering if maybe, just maybe, there are factors mobilizing to suppress honesty in this crucial chapter.

There at least three potential honesty suppressors which could already be muzzling people who would otherwise strike less confident poses:

— Garden variety political correctness is a constant subcurrent. There are surely forces at play more concerned with stigmatizing West Africa than with protecting America from diseases from that region.

— Weakness of spine is a common malady when harsh news must be delivered. It is hard to tell Liberians and their neighbors that they may not be able to see America this year. It is hard to tell African nationals or aid workers that we are not permitting travel there. And it is very hard to tell people they may be under armed guard for three weeks while we figure out whether they are lethal. These things are hard, but they are necessary. If we fail at these tasks because of some twisted misidentification of kindness, we are asking for the consequences.

— Finally, public officials seem unable to step forward to tell us the truth of uncertainty. From dog catcher to President, everyone wants to seem cool and collected, never jarred by events, even when they are jarring. No one at any level wants to step forward to say, “Guys, there is a lot we don’t know about this and there is going to be a learning curve.” I would be more calmed by that than by a bunch of wagging fingers insisting I remain calm while ball after ball is dropped. And Lord knows no public official wants to cast doubt on the sterling proficiency of another public official.

No one is yearning for fusillades of scapegoating, but the intercongratulatory mash notes that usually drip from press conferences at scary times like these may need to be tamped down as days and developments unfold.

We in the Dallas area have the same demand as Americans elsewhere, just more urgently. We want those tasked with evaluating Ebola to assess it honestly. Tell us what you know; tell us what you don’t know.

We want officials to place public safety as the top priority, even if it means inconveniencing already aggrieved people, sealing off travel to and from a dangerous place or offending the sensibilities of the politically correct.

Weakness in this regard will carry a death toll. Flights to and from Liberia should have been sealed off months ago. If we continue to sacrifice public health on the altar of misplaced sensitivities, our supposed protectors will face more tragic and disconcerting questions, and the answers will not be good.