The Clock Ticks for Sebelius 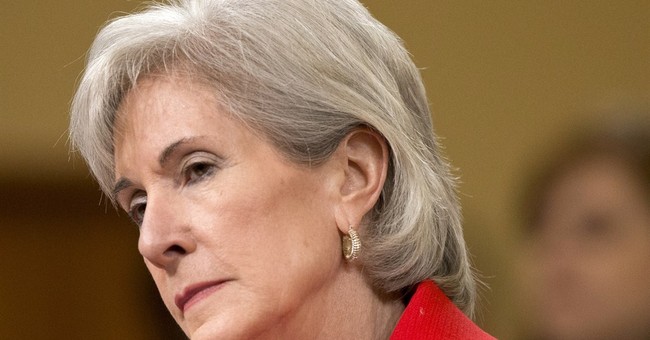 There’s only one reason I am aware of the post-Civil War ballad “I’ll Take You Home Again Kathleen.”

In the Season 1 original Star Trek episode “The Naked Time,” an Enterprise crewman falls victim to some alien bug and takes control of the ship, warbling the tune repeatedly over the public address system, to the chagrin of the crew.

But this week, needing an appropriate radio theme song for the travails of embattled HHS Secretary Kathleen Sebelius, I found a lovely version by Irish Tenor Ronan Tynan. It struck the appropriate melancholy mood:

“The roses all have left your cheek

I watch them fade away and die

Your voice is sad whene’er you speak

And the tears bedim thy lovely eyes.”

There is a running narrative that she cannot survive the debacle that is the Obamacare website rollout. It is worth evaluating whether this is proper in the short run, and whether it helps the goal of killing the Affordable Care Act down the road.

When she joined the Obama team, my only impression of her was as a fairly innocuous Democrat Governor of Kansas who had not shown up on my radar as a result of either stunning brilliance or noteworthy mischief. A woman of impressive achievement, she seemed a worthy fit in the new cabinet.

But there is danger for respectable mainstream Democrats in signing onto service on the twisted ship that is the Obama White House. Sebelius did not take much collateral fire at first as an Obamacare operative, but she was saddled with delivering the usual tortured explanations of how we were going to cover every living soul with every condition known to man, but it was somehow going to cost less.

While she did not suffer many slings and arrows as pro- and anti-Obamacare forces engaged in early battles, a different issue delivered a cannon shot to the HHS Secretary’s approval ratings. It took the case of a 10-year-old Pennsylvania girl who needed a lung transplant but ran afoul of an absurd rule that denied her a lung because she was under 12.

Sebelius refused to modify that rule, and was ultimately directed by a federal judge to do so in a finding that called the rule “arbitrary, capricious and an abuse of discretion.”

With the little girl home and recovering, Secretary Sebelius could look forward to a summer of reputational recovery.

Just when it looked like the IRS was going to be the whipping boy agency for Obamacare critics (and that day will come), along came the gift that keeps on giving-- the unmitigated catastrophe of the rollout of healthcare.gov.

As the President and his spokesvoices sought to mitigate and explain away this disaster for the ages, fingers began to point at the woman atop the agency holding the reins.

This put Secretary Sebelius in the hotseat to face pressure even from usually adoring voices from the left.

(If that liberal pushback surprises you, don’t let it. Obamacare disciples needed this beast to roll out as cleanly and efficiently as a moon rocket at Cape Canaveral. They know the failure of the delivery system sparks massive doubt as to whether the government that could not launch a website can remotely handle the infinitely more complex task of managing the actual care of millions.)

She has not done well under fire, and I confess a certain sympathy. What exactly is she supposed to say? What magical words would make people nod and say “Oh, NOW I get it.”

But the larger truth is that like any member of this administration, she is a willing accomplice to its agenda. It may not be her direct fault that healthcare.gov is such a mess, but responsibility lies at the feet of those in charge.

That ultimately means Barack Obama himself, who surely knew what might be coming. It is impossible to believe that this controlling, wonkish President would not be elbows-deep in every detail of this rollout. He wears it just as she does.

The difference is, he isn’t going anywhere. She may be gone by Thanksgiving. Two questions arise: does the administration help itself by throwing her under the bus, and does her dismissal bolster the case for Obamacare’s eventual extinction?

The answers are yes and yes.

The moment he shows Sebelius the door, the pressure momentarily lightens around Obama. Many will say “Look, he had to fire his HHS Secretary. There has been accountability, let’s move on.”

But a silver lining lies ahead for those seeking to stop Obamacare. A Sebelius departure would begin the wafts of a stench of failure that should properly lead to a successful effort to drive a stake through the heart of this monster.

When that great day comes, we will look back at these autumn days and the pillars of the “Affordable” Care Act that started dropping like leaves.

It all begins now, as even those who were open to Obamacare are starting to feel the first tugs of doubt. If we play hard and play smart, we can turn that into broad skepticism and eventually bitter distaste.

But as we head down that welcome road, paved in large part by the courageous resolve of Ted Cruz, Mike Lee and those who led the defund effort, we need to be ready to take advantage of every chapter in Obamacare’s unraveling.

The next chapter may be when someone, as the old ballad says, takes Kathleen home.