If You Do Nothing Else This Weekend, See "Gravity" 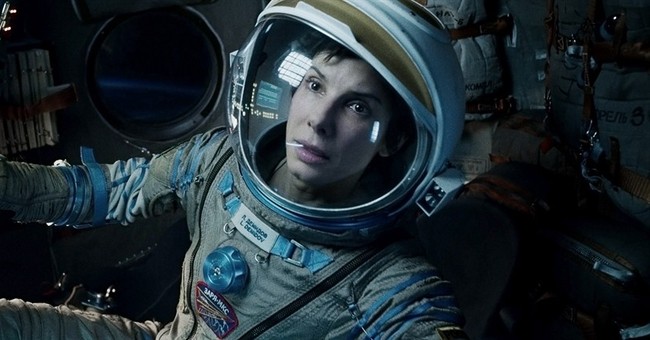 Why, with as much attention as “Gravity” is receiving in glowing film reviews and the entertainment press, do I need to devote column space to it?

Because, alongside praise from critics and breathless features about its technical wonders, I want to add elements of appreciation most others might not.

We all have our personal lenses for consuming popular culture. In this example, I walked into the theater with a lifetime of appreciation for manned space exploration. When most of the world stopped caring about moon missions as soon as Apollo 11 triumphantly returned, I stayed riveted. I hung on every step as Pete Conrad, Alan Bean, Alan Shepard, Edgar Mitchell, David Scott, Jim Irwin, John Young, Charlie Duke, Gene Cernan and Jack Schmitt waked the lunar surface in the three years following Neil Armstrong and Buzz Aldrin.

If you noticed that my list was in chronological order, you join me in a small and special community of space dorks who look at every film about space travel as an opportunity to be transported into the sense of wonder that such journeys can generate.

I was a wide-eyed adolescent for those moon missions, and I leapt at opportunities to consume films that featured man in space.

I have two memorable chapters in that history-- one familiar, one deeply obscure.

I have the requisite appreciation for “2001: A Space Odyssey,” even though it was a deep swim for me in sixth grade. But from its 1968 release to now, repeated viewings have built my appreciation for the poetic vision of writer Arthur C. Clarke and the visual virtuosity of director Stanley Kubrick.

But I do not consider it first and foremost a space movie. It is a layered essay about man’s fate and the human condition, that just happens to take place in space.

The “Star Wars” films are not space movies. They are swashbuckling popcorn journeys, meandering adventures that happen to take place in space.

For me, a “space movie” is about man’s interaction with the literal realities of what it is like for our fragile frames to venture out beyond the thin, frail womb of Earth. That is part of what riveted me for the actual space flights of my youth, and that is what I craved at the movies.

And around the holidays in 1969, I found it, in a film ignored by many at the time, and ever since. It will go down as one of the more forgotten vehicles for Gregory Peck, Gene Hackman and Richard Crenna, but it grabbed my brain and would not let go.

“Marooned” was based on a Martin Caidin novel about a lone Mercury astronaut stranded in orbit. Updated for the Apollo era, the three-man crew finds itself unable to return to Earth due to engine failure. Watching them face the dread of dying in space gave me an eternal appreciation of the risks our astronauts have always taken. For them, certain death lies just beyond the thin skin of the vessels they occupy or the suits they wear during space walks.

It is a routine space walk that opens “Gravity,” as wisecracking veteran Matt Kowalski (George Clooney) motivates scientist and space rookie Ryan Stone (Sandra Bullock) through a bout of nausea in the final minutes of a space walk outside their shuttle “Explorer.”

As the previews show, the astronauts are soon left with no shuttle to return to after it is destroyed by space debris.

Director/writer Alfonso Cuaron takes vast dramatic liberties with some basics of space travel in order to propel the plot, but two things make “Gravity” an instant classic: the emotional power it wrings from every one of its 90 minutes, and the use of space itself as a main character.

Here, for the first time since my parents took me to “Marooned” at the Uptown Theater on Connecticut Avenue in Washington, I was short of breath in my seat, living the dread of potential death in the icy grip of space.

“Gravity” will also win the praise of anyone who has actually made that trip. I’ve had the immeasurable honor of meeting and speaking with several of our most storied astronauts in recent years, including many Apollo veterans who helped blaze the trail to the moon in Project Gemini flights where space-walk skills were honed.

By their testimony, that is no easy gig. We think of zero gravity as a pleasant float in the peaceful blackness of the void, but if you actually have to do anything, it is more hostile than any environment in nature.

Weightlessness is the worst enemy of productivity, stability and normal locomotion. If you have to tighten a simple nut, your whole body twists in the other direction. Watching Kowalski and Stone attempt to navigate around spinning chunks of orbital metal is an exercise in harrowing accuracy.

“Gravity” is that rare gem, a space geek’s dream wrapped in a package of such emotional wallop that anyone with a heart is hooked.

The reason you need to see it immediately-- as soon as you read this would be good-- is that the plot surprises will leak out soon, following a law of physics as irrevocable as those found in Earth orbit.

I know Meryl Streep and Cate Blanchett have films about to be released. I don’t care. Hand that Best Actress Oscar to Sandra Bullock right now. Several actresses turned down this role. The sound of all of them kicking themselves may just poke through the vacuum beyond the atmosphere.

Like Tom Hanks in “Cast Away,” Bullock carries the film on the shoulders of her brilliant absorption of a circumstance so desperate it defies comprehension.

And all you can say about Clooney is that after “Up in the Air” and “The Descendants,” the “ER” pretty boy has taken his place among our best actors.

“Gravity” is as fresh as today’s technology, yet it takes us back to a proper sense of awe and respect for the risks taken by all who have ventured into space to extend man’s reach over fifty-plus years, from the twelve who walked on the moon to those we have lost-- three in the Apollo launch pad fire, seven each in the Challenger and Columbia tragedies.

It is always a joy to walk out of a great movie. But this one in particular left me more than appreciative. With the detail of the sets, the precision of the effects, the emotional wallop of the script and the devotion and craft of the actors, I am left with an abiding gratitude.

I hope this long thank-you note crosses their paths. And I hope it puts you in a theater this weekend.