US Navy Shows Up Iran in Strait

Mark Baisley
|
Posted: Jan 13, 2012 12:01 AM
Share   Tweet
Trending
One of the most striking images to come across the news wires so far in this young year was the photo of an Iranian fisherman embracing his heroes, crew members from the American guided-missile destroyer USS Kidd who ended their hellish ordeal at the hands of Somali pirates.  I wonder if that fisherman understands the irony of the American military releasing Iranian hostages.
The destroyer deployed from San Diego last July along with several other ships as part of the John C. Stennis aircraft carrier strike group.  According to U.S. Navy Public Affairs, the strike group’s mission is to “support operations in Iraq and Afghanistan, counter-piracy and maritime security operations. They will also work closely with allies to build regional security, freedom of the seas and long-term stability.”
CARTOONS | AF Branco
View Cartoon 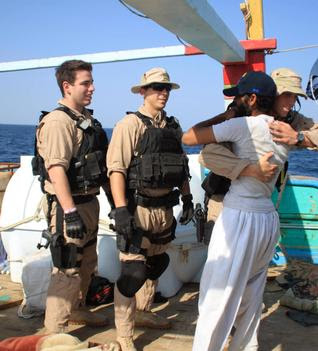 Iranian Fisherman hugs US Navy Landing Party which freed him from pirates.
The strike group, which includes six ships, over 6,000 sailors, and 70 aircraft is commanded by Rear Admiral Craig S. Faller.  In the hours leading up to the July deployment, Admiral Faller issued the following statement, "We are a nation at war.  That war is going on as we speak in Afghanistan. We will be joining that fight, and supporting those operations. Also, we are still involved and engaged in Iraq. We expect to be involved and supporting those operations as well."
In early October of 2011, the Stennis aircraft carrier strike group arrived in the Arabian Sea, off the coast of Iran.  In November, as U.S. military operations were winding down, the John C. Stennis became the sole American aircraft carrier currently operating in the Arabian Sea.
Iran’s recent saber rattling began at about the time that the aircraft carrier USS George H.W. Bush left the region, soon after the appearance of the Stennis.  While preparing to engage in a naval exercise near the Straight of Hormuz, General Ataollah Salehi issued the statement, "We recommend … to the American warship that passed through the Strait of Hormuz and went on to the Gulf of Oman not to return to the Persian Gulf … since we are not in the habit of repeating a warning and we warn only once."
Amidst these formidable flotillas, a hodgepodge of Somali pirates continues to sneak around the Arabian Sea, striking in wily and merciless ways.  In November, the pirates commandeered a common fishing boat operated by 13 Iranian fishermen.  For forty days, the pirates cleverly operated the captured fishing boat as a base from which they would launch strikes against larger ships passing by.
The Stennis strike group eventually became suspicious of the fishing boat Al Molai and made radio contact with them from the USS Kidd.  Speaking the common Persian language, the captain assured the American destroyer that no pirates were on board.  He then began speaking in Urdu, a South Asian Muslim language that the pirates did not understand.  However, the linguists on board the USS Kidd did.
The captain of the Al Molai confirmed that they were indeed under the control of Somali pirates and pleaded for the Americans to board their vessel.  While the name Al Molai means the hornless, the USS Kidd takes its name from an American naval hero from World War II.
As the Americans stormed the captured fishing boat, 15 pirates waved their arms in complete surrender to the heavily-armed sailors.  This operation did not come at the direction of America’s timid Commander in Chief, who recently announced cutbacks in the military budget.  Admiral Faller told reporters that the decision to come to the aid of the Iranians was standard practice. "We saw a need and moved in to help people at sea who were in distress."
After treating the fishermen to medical attention, supplying them with food and liquids sufficient for their return trip to Iran, the American sailors sent the Al Molai on its way.  All 13 Iranians were sporting a fresh, new USS Kidd ball cap as they sailed toward home.
Piracy has been a nasty habit of that region of the world for centuries.  Fed up with years of paying ransoms for the return of American merchant ships and their crews, Thomas Jefferson deployed ships and Marines to the Mediterranean immediately after being sworn in as President in 1801.  Since then, the United States has maintained Jefferson’s pledge to spend “millions for defense but not one cent for tribute.”
Thomas Jefferson’s sentiments about Muslim pirates were formed 15 years earlier when he and John Adams met with their representative in London to negotiate a peace treaty.  Jefferson reported to Congress that Sidi Haji Abdul Rahman Adja told him at the meeting that Islam “was founded on the Laws of their Prophet, that it was written in their Quran, that all nations who should not have acknowledged their authority were sinners, that it was their right and duty to make war upon them wherever they could be found, and to make slaves of all they could take as Prisoners, and that every Musselman (Muslim) who should be slain in Battle was sure to go to Paradise.”
Liberty needs a champion.  The heroes of the United States military are a powerful force for good throughout the globe.  During the rescue of the Al Molai, everyone on board understood who the bad guys were and who the good guys are.
Grenell: Biden's 'Quiet Diplomacy' is Concerning as Hamas Attacks Israel
Katie Pavlich
Here's What's At Stake If Smith and Wesson Loses Its Case Against New Jersey
Matt Vespa
Whitmer Moves to Shut Down Canadian Oil Pipeline. The Company Is Having None of It.

Here's What's At Stake If Smith and Wesson Loses Its Case Against New Jersey
Townhall
Biden tells those who don't get vaccinated they will 'end up paying the price'
Twitchy
'Antiracist' Doctor Finds Little Sympathy After Rant on White Woman Who Asked if She Was a Retail Clerk
Redstate
The COVID-19 Test No One Is Talking About: Make Sure Your Children Have It Before They Are Vaccinated
PJ Media