Did Feds Commit Felony By Altering 302s In The Michael Flynn Case?

Marina Medvin
|
Posted: May 04, 2020 12:01 AM
Share   Tweet
The opinions expressed by columnists are their own and do not necessarily represent the views of Townhall.com. 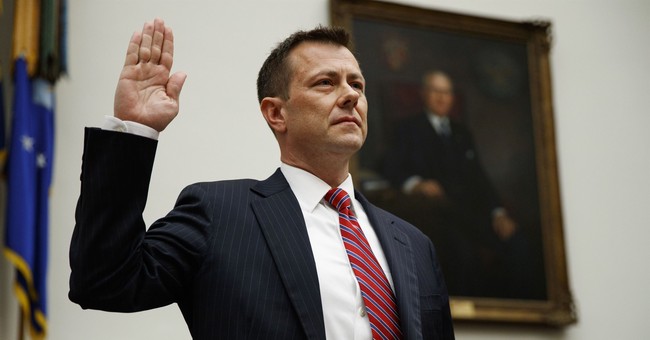 The U.S. Code makes it a felony offense, punishable by up to 20 years in prison, to knowingly alter or falsify an entry in a document with the intent to influence a federal investigation. This is comparatively a more serious offense than the false statement charge that Michael Flynn pled to, which carries a maximum penalty of 5 years in prison.

Newly revealed text messages between federal agents Paige and Strzok discussing the Michael Flynn case, dating February 10, 2017, show the cheaters discussing rewriting a 302 written by another agent, trying to disguise their edits as the author's own voice.

According to insinuations made by Flynn's lawyers in hearings and court filings, statements made by Sidney Powell to the media, and pursuant to a review of the publicly available materials related to this case, the documents that the federal agents were discussing altering were almost certainly 302 reports. "An objective view of SSA 1's purported handwritten notes with the FD-302 of the January 24, 2017 interview of Mr. Flynn that Lisa Page instructed Agent Strzok to edit on February 10, 2017, reveals equally troubling 'inaccuracies,' 'omissions,' and 'unsupported statements,'" wrote Flynn's lawyers in their Motion to Dismiss for Egregious Government Misconduct. "Overnight February 10-11, 2017, Strzok makes multiple changes to the FBI 302 of that interview—changes that are objectively material to the defense," Flynn's lawyers later explained in a supplemental filing.

A 302 report is an FBI agent's record of investigative activity with detailed summaries of interviews conducted, which is filed on an official FBI Form, FD-302. A 302 report is akin to a very formal police report. In United States v. Harrison, the U.S. Court of Appeals for the District of Columbia Circuit explained the officiality of an FD-302 as follows: "In order to assure the accuracy of the reports, the [FBI] regulations require that the interviewing agent dictate or prepare a draft 302 report within five working days; it must then be typed and returned to the agent within another five working days. The agent is required to proofread the typed version and compare it with his notes for accuracy. Once this process is completed, the agent initials the report ..." The 302 report guides the course of subsequent FBI action with respect to the suspect. In the Flynn case, the 302 report was altered not by the agent who drafted the notes and the original report, but by two other agents, masquerading as the original writer, in apparent disregard of the FBI policy outlined above.

What happens when the signatory, the agent responsible for the accuracy of his 302 report, is not the one to make final edits in it? Is the integrity of the report inherently compromised? Is the report instantly rendered unreliable? After all, the altered 302 report is the crux of the federal government's case against Michael Flynn. How often do federal agents secretly alter their coworkers' 302 reports, while trying to maintain the original writer's voice to misleadingly present their edits as the author's? These troubling questions aside, the new evidence damningly shows Paige and Strzok knowingly altering another agent's original 302 report in the Flynn case, attempting to pass off their modifications as the work of the other agent.

But why did they do this? Did they have criminal intent? Page and Strzok texted about an "insurance policy" on August 15, 2016, and the very next day they opened an investigation on Michael Flynn. According to Sidney Powell, it's "easy to see that [Flynn] was set up and that Mr. Flynn was the 'insurance policy' for the FBI." In the August 15 text from Strzok to Page, he states, "I want to believe the path you threw out for consideration in Andy's [McCabe's] office — that there's no way he gets elected — but I'm afraid we can't take that risk. It's like an insurance policy in the unlikely event you die before 40." Page and Strzok's intent, from inception, was to get Flynn, "to get him to lie, so we can prosecute [Flynn] or get him fired," as another agent described. The criminal case against Michael Flynn depends entirely on the modified 302 report. Recall, it was the modified 302 report that induced Flynn's guilty plea. "[My former defense attorneys] walked me through the 'final 302' in detail. They explained if I did not accept the plea deal, that I should 'expect to be indicted the next day,'" Michael Flynn wrote in his declaration of innocence. The alteration of the 302 in Flynn's case is the key to the entire prosecution.

Do the text messages expose Paige and Strzok knowingly altering or falsifying entries in a 302 report with the intent to influence the federal investigation of Michael Flynn, thereby committing a felony offense? Piecing the evidence together, it's hard to see an argument to the contrary. Paige and Strzok's alteration of the 302 report changed the course of the investigation of Flynn, prompted criminal prosecution, and induced a guilty plea by an innocent man. The chain of events that unfolded as a result of Paige and Strzok's actions, ruining Michael Flynn's life and reputation, would never have happened but for the alteration of the FD-302.

Michael Flynn's legal team has been desperately seeking the original 302 report to prove their client's innocence and to simultaneously cement the federal agents' culpability. The original 302, which remains dubiously missing, will be the final nail in the feds' coffin. Where is the original 302?

Maybe the Durham probe, which is investigating these shameful KGB-style agents, will tell us what happened to the original 302.