Marina Medvin
|
Posted: Apr 21, 2020 12:01 AM
Share   Tweet
The opinions expressed by columnists are their own and do not necessarily represent the views of Townhall.com. 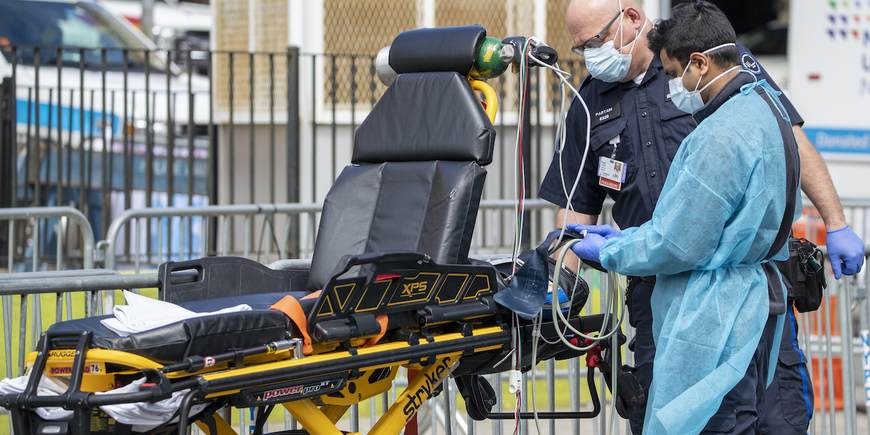 Professor Isaac Ben-Israel (also known as Yitzhak Ben Israel) published an English translation of his analysis on worldwide coronavirus infection decline, The End of Exponential Growth: The Decline in the Spread of Coronavirus.

As I wrote last week, professor Ben-Israel published a Hebrew paper comparing the rates of coronavirus infections in the U.S., the U.K., Sweden, Italy, Israel, Switzerland, France, Germany, and Spain over an eight-week period. His team's graphs showed a contradiction to what Americans would have expected to see after listening to our governors' lockdown orders: irrespective of whether a country quarantined like Israel, or went about business as usual like Sweden, coronavirus peaked and subsided in the exact same way. In the exact, same, way. Ben-Israel's graphs show that all countries experienced seemingly identical coronavirus infection patterns, with the number of infected peaking in the sixth week and rapidly subsiding by the eighth week.

Professor Isaac Ben-Israel has provided Townhall with a copy of the English version of his study.

"Our analysis shows that this is a constant pattern across countries. Surprisingly, this pattern is common to countries that have taken a severe lockdown, including an economy paralysis, as well as to countries that implemented a far more lenient policy and have continued in ordinary life," writes Professor Isaac Ben-Israel in the introduction of the translated study. His conclusion is simple: coronavirus "declines even without a complete lockdown."

Professor Ben-Israel began the analysis to find out whether the hypothesized coronavirus exponential growth rate is accurate. His research proved the answer is no. But aside from proving that the infection rate was not exponential in Israel, or anywhere else in the world, his investigation showed "a global phenomenon" of infection rate decline as opposed to exponential growth. "The spread of the virus starts at an exponential rate, however, it continues to moderate and ultimately fades after 8 weeks or so since its outbreak," Professor Ben-Israel explains.

"It is interesting to note," he writes, "that this pattern, mainly the onset rapid growth and the following decline in the number of new daily patients, is still shared amongst countries that responded in significantly different ways." He demonstrates this point by comparing infection rates in Italy, a country that imposed a complete lockdown, with Sweden, which did not.

Most importantly, Professor Ben-Israel debunks the misconception of government lockdowns or controls as a leading cause of coronavirus infection rate reductions. "Some may claim that the decline in the number of additional patients every day is a result of the tight lockdown imposed by the government and health authorities. Examining the data of different countries around the world casts a heavy question mark on the above statement. It turns out that similar pattern - a rapid increase in infections that reaches a peak in the sixth week and declines from the eighth week – is common to all countries in which the disease was discovered, regardless of their response policies: some imposed a severe and immediate lockdown that included not only 'social distancing' and banning crowding, but also an economic shutdown (like Israel); some 'ignored' the infection and continued almost a normal life (such as Taiwan, Korea or Sweden), and some initially adopted a lenient policy but soon reversed to a complete lockdown (such as Italy or the State of New York). Nonetheless, the data shows similar time constants amongst all these countries in regard to the initial rapid growth and the decline of the disease."

Professor Ben-Israel concludes the same as we have heard from some conservative pundits, like Jesse Kelly. "Severe lockdown has some negative implications. Its immediate result is an increase in the level of unemployment and the drop in GDP ... This will eventually lead to an increase in poverty, as well as an increase in loss of human life due to other diseases."

Nonetheless, Ben-Israel recognizes the risk of the disease and notes that "it is advisable to continue with low-cost measures, such as wearing masks, expanding testing for defined populations and prohibiting mass gatherings."

President Trump's Guidelines for Opening Up America Again include these low-cost infection prevention measures such as social distancing and masks. Still, liberal Governors, such as Virginia's Ralph Northam, are not inclined to give up their authoritarian control of the people and businesses. In the meantime, 78% of Virginia restaurant workers have lost their jobs since Northam implemented his closures in March. Northam advised just a day ago that he's not budging and doubled down on this compulsory closure policy, claiming his policy is saving lives. Economic well-being, while a legal requirement for the exercise of a Virginia governor's authority, appears to be of no concern to Northam.

All American leaders need to review Professor Isaac Ben-Israel's analysis. We need to stop our reliance on Dr. Fauci and company, who have demonstrated time and time again that reality and economics play no role in their decision-making. Fauci does not understand the limitations of government powers in the United States, nor the spirit of the American people. Professor Ben-Israel showed us that closures do not reduce the spread of coronavirus. We need to accept this reality, we need to admit we overreacted and that coronavirus closures were a mistake, and we need to go back to work. Now.