Marc Newman
|
Posted: Mar 08, 2016 12:01 AM
Share   Tweet
The opinions expressed by columnists are their own and do not necessarily represent the views of Townhall.com. 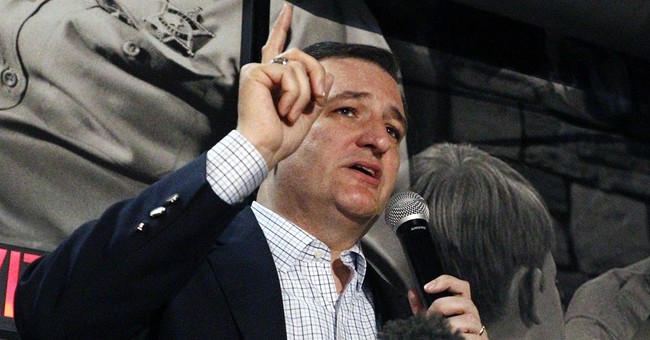 I had a conversation, many months ago, with a friend of mine who was a Carly Fiorina supporter. He liked her toughness, but was opposed to the candidacy of Ted Cruz. He argued vociferously that Cruz was unelectable. Part of the reasoning was that he thought Cruz lacked the support of others in his party, particularly those in the Senate.  The claim "Nobody likes him" reflected what is now a popular talking point.

Cruz, by now, has certainly overcome the idea that he can't win contested primaries. There is nearly universal agreement that he is running a very smart campaign. And all the videos of campaign events, which have emerged recently, paint a picture of a man who cares about other people, is civil, measured in his responses, and is, well -- friendly. But claims of his unpopularity and unelectability continue to dog him.

What people don't take the time to examine is precisely who doesn’t like Cruz, and why identifying those people is the key to understanding the incredible endeavor upon which Cruz has embarked. He doesn't just want to be president of the United States for eight years.

What I think some conservatives really don't get is that Ted Cruz is the best chance they are likely to have in the near future to truly transform the Republican Party, and, as a result, positively alter the political landscape for decades to come.
When conservatives were looking for the exits after the last presidential election, conservative talking heads were telling them to stay in. They said, rather trying to compete using a third party, it was easier to reform the Republicans from the inside. Then after the mid-terms, when the people they elected to stop the liberal juggernaut ended up caving on the issues that matter to conservatives, many wanted to bolt, perhaps establish an official tea party. Again, powerful conservative voices advised caution, arguing that defection to create a third party would inevitably lead, essentially, to a third term for Obama -- from a policy perspective. These voices were, and are, correct.

This is the year of "the outsider," we’re told. And conservatives are tired of losing. They want to win. But what will winning mean to them if it has no connection to conservative principles?

Donald Trump is not going to battle for conservatives. All it takes is a survey of the positions Trump has held -- not just over the years, but quite recently -- to discover Trump is going to battle for Trump. Conservatives who are dazzled by Trump's style will be disappointed in his substance. Slogans are no substitute for convictions, or detailed policy initiatives. If Trump wins the nomination, no amount of cajoling -- even if it comes from the revered voices of conservative talk radio -- is going to halt the stampede of principled conservatives out of that big tent that establishment Republicans think they have created.

Parties exist for a reason. They define boundaries of public policy. Parties are like word definitions. If you broaden a term so that it means nearly everything, it becomes useless, meaning nearly nothing.

Cruz is like a solid definition. Those who rally to his campaign know what it means. He's not trying to win everyone by pandering to multitudes of conflicting constituencies. He is trying to win everyone by calling them to commit to common principles that are, or should be, self-evident. He's not trying to represent divergent and clashing views, he is saying "These are my views. They are grounded in the Constitution, in liberty, and in the unalienable rights granted to us by our Creator. These should be our views, American views, and if that vision is appealing to you, that is what I intend to represent."

Cruz is a U.S. senator, and he has been Solicitor General of Texas, so he has been "inside" the government, but he is an outsider. His principles don't come from inside the Beltway, they come from outside. And not just outside Washington, D.C. Like the Founding Fathers and those who followed them, Cruz finds his principles in an objective moral order.

Cruz has, in his history, not been a go-along-to-get-along kind of candidate (or senator for that matter). He has a clear vision, with an articulated set of convictions, that could upend the establishment good-old-boy Republican party and make it over into a much more conservative image -- if he is elected. His victory would embolden many conservative candidates all the way down the general election ticket.

So if you've been complaining that you keep sending Republicans to Washington D.C. and they disappoint by constantly caving -- not on issues where compromise is expected, but on issues of clear principle -- then Ted Cruz is your candidate.

Even in New Hampshire, where Cruz placed third despite pollsters predicting a fourth- or fifth-place finish, sixty-five percent of Republican voters wanted a candidate other than Trump. There seems little reason to believe that the supporters of the candidates dropping out would gravitate toward Trump. As the field narrows and there is no longer a forest of candidates to provide cover for Trump in debates, Cruz's campaign strength will increase, as was demonstrated in Saturday's primaries. Does anyone really believe that in a head-to-head debate with Cruz, Trump's self-aggrandizing talking points, scattershot thought processes, and slogans would rescue him from Cruz's incisive and articulate grasp of issues and policy?

If any of the positions that Cruz represents is an issue of importance to you -- that issue which is at the top of your political hierarchy, even should you have more minor areas of disagreement elsewhere -- then vote for him. If he is elected, you know he won't back down. If Republicans are looking to remake their party into one its constituents can trust, they won't get a better chance. The candidate that conservatives have claimed to wish would arrive is actually here. He's Ted Cruz. And it's long past time we put our votes, and our money, where our mouths are.