Marc Lotter
|
Posted: Nov 02, 2020 9:41 PM
Share   Tweet
The opinions expressed by columnists are their own and do not necessarily represent the views of Townhall.com. 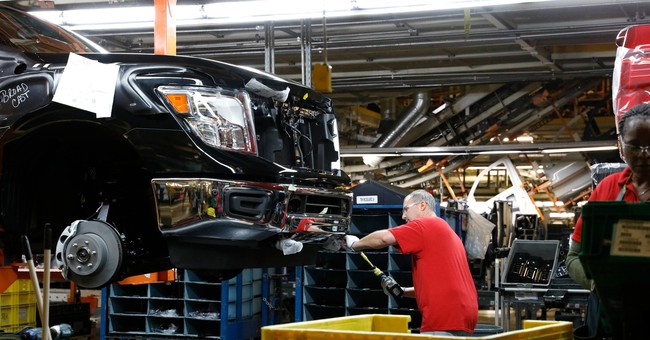 More than five years after Donald Trump came down the escalator at Trump Tower and upset every assumption in American politics, Washington, D.C. has changed massively and permanently for the better.

But even after almost four years of pushing against the establishment, enacting his agenda, and appointing more and more people who support putting America First to the highest posts of the American bureaucracy, Donald Trump remains essentially an outsider — especially on matters of economic policy.

With all the focus on this administration’s success in bringing about more than three years of historic booming times, it’s easy to lose sight of just how revolutionary Donald Trump’s economic platform was four years ago. It was not what you typically see from a major party presidential candidate — a fiddling with some tax rates here, an adjustment to spending there — but rather a challenge to the basic Washington bipartisan Washington consensus that had reigned for decades.

When Joe Biden and the rest of the Washington establishment voted for NAFTA 26 years ago, that was the end of all resistance to a bipartisan free trade consensus that sold American industrial production and the manufacturing-based middle class out in exchange for cheap foreign goods. NAFTA went hand in hand with massively liberalized trade relations with the rising China, even as the totalitarian country massacred its own citizens and established an internal gulag system that should have rendered them unqualified to trade with America at all.

Joe Biden played a leading role in all of that. During Biden’s heyday, surrender on trade and putting the American worker last — well behind the American multinational corporate executive — was pretty much the only show in town. Or at least it was until Donald Trump came around, ran on a platform of putting America First, renegotiated NAFTA into the USMCA, extracted concessions from China, and began the long process of bringing supply chains back home to our shores.

Donald Trump is solid on Republican bread-and-butter issues such as tax cuts, but he also represents a break from the past. Earlier Republican presidents and candidates certainly supported tax cuts and deregulation, but they weren’t interested in changing how we tax and regulate.

President Trump did not merely slow the pace of federal regulation creation; he took a blowtorch to the entire thing, insisting on ditching at least two regulations for every new one added — the real ratio has been even better, at nearly eight-to-one. He did not merely cut tax rates, he signed a law that ended Middle America’s subsidization of wealthy taxpayers in high-tax blue states by capping the state and local tax deduction.

The results are undeniably positive. Three years of record low employment rates, rapid wage and homeownership growth, a booming stock market, and a renaissance in American industry do not happen by accident.

Neither do V-shaped recoveries. In the fallout from the COVID pandemic, much of the world is floundering in the worst depression since the 1930s. By contrast, America has already regained more than half the jobs lost in the worst depths of the pandemic, our stock market has erased its pandemic dip, and unemployment in 23 states has already fallen below the average for the entire eight years of the Obama-Biden administration.

The fact that Joe Biden is raising twice as much money from billionaires and five times as much from Wall Street as the President should, if nothing else, serve as a reminder that Donald Trump is still very much an outsider, even after four years in the Oval Office. Behind Joe Biden are arrayed a coalition of well-connected people who became wealthy and successful under the old system, and they are eager to get back to business as usual. They expect Biden to go right back to shipping jobs overseas and selling out American workers.

More than ever, American Greatness depends on keeping Donald J. Trump in the White House.

Marc Lotter served as special assistant to President Donald Trump and as press secretary to Vice President Mike Pence. He is now on the advisory board of the Donald Trump campaign. You can follow him @Marc_Lotter.