Marc Little  |  Mar 07, 2020
The opinions expressed by columnists are their own and do not necessarily represent the views of Townhall.com.
Top Columns
Trending on Townhall Media 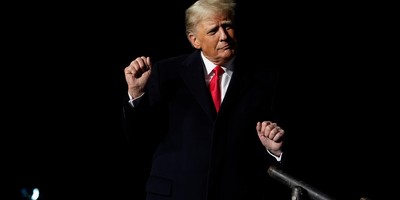 Washington, DC - On February 27, 2020, I attended a White House Roundtable discussion that included other black influencers and leaders.   The meeting concluded in prayer which I was honored to lead.

Following this rare opportunity came the black leftists’ ad hominem attacks to bully or dictate black thought in America and dampen support for the president.  This is a hard task on both scores and they now know it.  This president has demonstrably changed the lives of all Americans with record low unemployment created by 6.7 million new jobs so far. President Trump resuscitated our HBCUs by approving multi-year funding of $250 million per year.  Prior presidents made our black college presidents grovel for funding each year. Under the First Step Act’s prison reform, more than 3,000 prisoners were released; 91% were black. The act reduces recidivism and gives judges more discretion in mandatory minimum sentencing, among other things.

President Trump also established Opportunity Zones “designed to spur economic development and job creation in distressed communities throughout the country.” Black communities are being revitalized. He deserves our thanks and our prayers.

Our prayers seemed trigger black leftists who, with the sycophantic media, used a photo of the faithful attendees praying for President Trump along with such words and phrases as “White House negroes“ (Chris Redd), “Uncle Toms” (Keith Boykin), “Massa, We Gonna Pray Fo’ You Massa” (Spike Lee), and unqualified (Leo Terrell).  These attacks will no longer go unanswered. This racist and bigoted ridicule has no place in the mainstream media.  Moreover, this episode is a direct attack on Christians who would dare pray for the president. Why else would the media pair the photo of the faithful in prayer with such terms as “White House Negro”? Are there no decency standards anymore?

Seventy-nine percent of blacks in America are Christians. Black Christians understand the importance of prayer. The Bible exhorts [that] supplications, prayers, intercessions, and giving of thanks be made…for all who are in authority. (1 Tim. 2:1-4). Prayer is a key element in black life.

SNL’s Chris Redd in his attempt at humor said, “Look at these White House negroes.  Who are you all praying to?  The ghost of blackface past?”  This is a mockery and attacks all Christians.

Praying for the president is an honor and a biblical model that demands respect. Prayer must remain a safe zone for people of all faiths and these black leftists don’t get to determine who gets prayer. God did so already.

In their most recent ad hominem attacks, they emphasize our color over our Christian faith.  Somehow, if you are a black conservative, you lose your Black Card and become a target of the Black Gestapo. In doing so, they attempt to rob us all of Dr. Martin Luther King, Jr.’s dream where we should be judged by the content of our character and not by the color of our skin.

Here is a little secret:  I cannot be bullied by the Black Gestapo. Rather, I pity them. These black leftists embrace the racist values of the Democrat Party that promote the murder of black babies in the womb (20 million since 1973), support generational welfare, are glad to keep fathers out of the home while 73 percent of our little boys and girls are raised by single mothers, destroy biblical marriage with homosexual marriage, and plot to destroy the next generation by teaching gender fluidity to our children in Kindergarten.  These are all existential threats to humanity gladly carried forward by black leftists like a cancer.  Black conservatives want no part of that ungodly agenda and stand against it along with hundreds of millions of Christians in the U.S.

Black leftists are failing at keeping blacks tethered to the Jim Crow-like Democratic Party Play Book and we are fleeing the plantation daily, growing freer by the day.

Each person praying for the president in this memorable moment possesses the inherent right to freely express their Christian faith.   No mad black leftist can scare that away.  And so, in the words of the inimitable Bernie Mac, “You don’t understand, I ain’t afraid of you……”