Marc Levin
|
Posted: Apr 10, 2017 1:30 PM
Share   Tweet
The opinions expressed by columnists are their own and do not necessarily represent the views of Townhall.com. 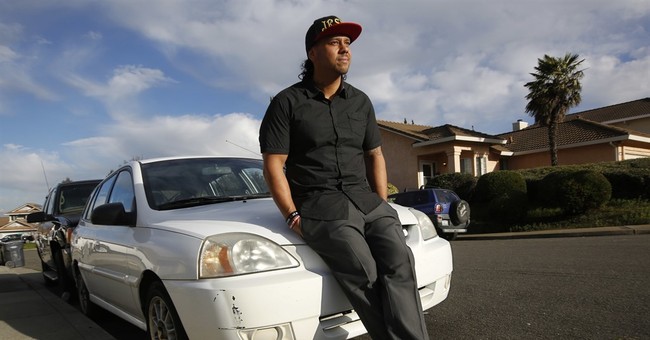 Editor's Note: This column was co-authored by Angela Ciolfi.

Kimberly Hopkins, a U.S. army veteran, lost her driver’s license for unpaid court costs and fines relating to a couple of speeding tickets and a citation for bald tires and a missing license plate. She walked miles to the courthouse to ask for a payment plan so that she could get her driver’s license back. The court said no, its policy does not permit second chances after a person defaults on their first payment plan. So Kimberly hitched a ride back home. And there she stayed, essentially confined to her home without a driver’s license to get to and from work, medical appointments, or even the grocery store. Without a job, her only form of income was selling her blood plasma.

Kimberly was one of nearly a million Virginia drivers whose license is suspended in part for failure to pay court costs and fines—that’s 1 in 6 Virginia drivers. Of those, 647,000 drivers are suspended solely for failure to pay. Their licenses were not suspended by a court, after a judge determined that they had the means to pay and just refused. Their licenses were suspended automatically by a state law that mandates immediate suspension any time a person misses a due date on a payment, whether or not they have any money.

This is a matter of basic fairness. People who purposefully defy a court order should be punished. People who live paycheck to paycheck and must choose between paying the rent and paying their court costs should not be punished for choosing to keep a roof over their family’s heads. The only way to tell the difference between those two groups of people is to have a hearing. But having hearings for nearly a million people would be prohibitively expensive.

That’s why it’s time for Virginia to get serious about repealing its failed automatic suspension law altogether. In Florida, a study of a similar law questioned whether license suspension was effective in increasing collections, given that most licenses suspended for failure to pay remain suspended for over a year. Moreover, having so many suspended drivers, many of whom keep driving out of necessity, promotes disrespect for licensing laws and makes our roads less safe by diverting law enforcement resources away from true safety threats.

America is the land of opportunity. But so many opportunities depend on having a reliable source of transportation to get to and from work and meeting other obligations to one’s family. Because employers see driver’s licenses as indicators of reliability, not having one has become as much or more of a barrier to getting hired as having a felony record.

There is wide acknowledgement from policymakers on both sides of the aisle that Virginia’s automatic suspension policy isn’t working, but Virginia’s legislators do not appear to be serious about delivering a fix. Last year, Republican legislators proposed, and the General Assembly endorsed, a study of the driver’s license suspension law. But the study did not move forward. This year, Democratic Governor McAuliffe proposed a partial repeal of the law, but those proposals failed to make it past key committees. Last month, the Virginia Supreme Court enacted new court rules designed to make it easier for people to get on payment plans. But then General Assembly tweaked the new rules in ways that make it harder for people to get on payment plans and keep or reinstate their driver’s licenses. The Governor should not sign such a bill unless the General Assembly agrees to restore the protections put in place by the Supreme Court, and full repeal should be on the table for next year’s session.

Courts should have the authority to punish intentional defiance of their orders. They should also have the authority to adjust costs and fines based on income. Instead, court and law enforcement resources are wasted prosecuting and incarcerating people for driving on a suspended license, and hundreds of thousands of other Virginians are needlessly pushed out of the labor market because they can’t drive to work. Automatic punishments violate basic notions of fairness and have no place in the land of opportunity.

Marc A. Levin is director of the Center for Effective Justice & Right on Crime at the Texas Public Policy Foundation and Angela Ciolfi is Legal Director at the Legal Aid Justice Center.