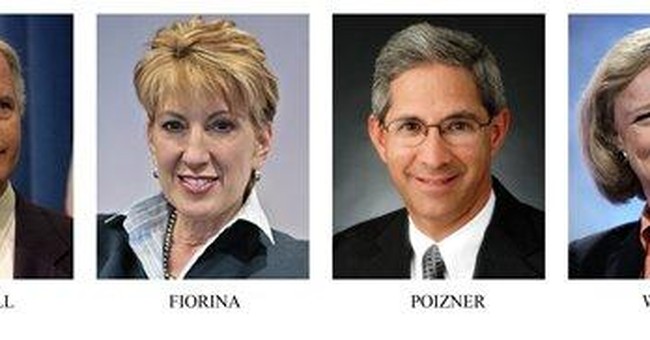 No one is calling California insurance commissioner Steve Poizner a "Fiscal Conservative in Name Only" -- not yet.

But after U.S. Senate candidate Carly Fiorina of California made mutton meat out of GOP rival Tom Campbell in a much talked about "demon sheep" television ad, Steve Poizner is clearly worried.

Both Campbell and Poizner are guys taking on tough, entrepreneurial ladies in GOP primaries: Former Hewlett-Packard chief exec Fiorina is running for the GOP's Senate nomination against Campbell, while eBay founder Meg Whitman is battling Steve Poizner for the GOP's gubernatorial slot. At the moment Poizner is taking a beating, down 30 points in the polls.

Maybe that's why Poizner went ballistic in response to an amiable e-mail sent by Whitman's political consultant Mike Murphy urging Poizner to drop out. "I hate the idea of us each spending $20 million beating on the other in (the) primary," Murphy wrote, reaching out to a Poizner loyalist. "And we can spend ($40 million-plus) tearing up Steve if we must; bad for him, bad for us and a crazy waste to tear up a guy with (a) great future."

Poizner's hysterical response? First he called a press conference, and then he called in the cops, asking the FBI and the U.S. Attorney's office to investigate Whitman for bribery and extortion. (I kid you not.)

Not since New York's Dede Scozzafava called the cops on a Weekly Standard reporter has a major political candidate demonstrated such a wafer-thin skin, not to mention a willingness to waste scarce law enforcement resources.

I'm not sure this is the kind of man we want protecting our national security, but Poizner disagrees.

Poizner likes to shake things up a little, creatively interpreting laws in his own political favor. And so he launched his own personal jihad against so-called "indirect investments in terrorism" -- which comes down to any insurance company that does business with any company that does business in Iran. I mean, it may sound conservative at first blush -- getting tough on terrorism -- but, actually, it's a profound abuse of government power.

The federal government already forbids direct investments in Iran and other state sponsors of terrorism. What Poizner is championing across the country is a new wave of elected state insurance regulators trying to appeal to the GOP base by playing national security experts, instead of paying attention to consumers' bottom lines. Already insurance commissioners in Florida and Pennsylvania are threatening to jump on Poizner's ill-conceived bandwagon.

What's wrong with using state insurance regulations to crack down on terrorism? Well, just about everything.

In the first place, notice that phrase "indirect investments." It means the line is blurry and unclear -- perfect for the unscrupulous government official seeking to shake down a company. As Redcounty.com political consultant and blogger Matthew Cunningham put it, "I thought subpoenaing business executives and hauling them before (a) public hearing for a good flaying in front of TV cameras (was) what Democrats did?"

Then there's the potential for abuse of this idea in the hands of liberal Democrats. What will happen when the son of Jerry Brown or Nancy Pelosi occupies the post of California insurance commissioner, instead of Poizner? Will businesses that do business with the Catholic Church or the LDS church take a hit for cooperating with "discriminators"? Could Israel, itself, already the target of divestment campaigns in Europe, become the new South Africa in the minds of San Francisco liberals?

Real conservatives should stand for a key principle: for limited government and against crony capitalism. The purpose of an insurance commissioner and insurance regulations is to make sure that those of us who pay into insurance pools get our money. It is not to play Jack Bauer, freelance terrorism expert, to the cheers of the crowd.

So Iran threatens to get the bomb, why should California consumers take a hit?