Palin and her critics 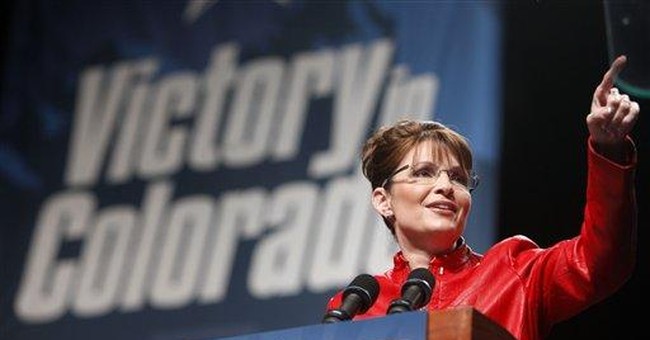 This is neither her fault nor her virtue.

I cannot help but admire Gov. Palin's resolute capacity to remain herself -- confident, eloquent, relentlessly optimistic -- in the face of a national campaign of hate and ridicule the likes of which I cannot recall seeing. Ever.

Gov. Palin's appearance on "Saturday Night Live" this week was remarkably good-humored under the circumstances. But Sarah Palin has, whether she likes it or not, transcended the status of an actual human being to become a symbol in American politics and culture.

A symbol of what, exactly, is still being contested.

Sarah Palin means different things to different people. "I'd rather be a symbol of sex than a lot of other things people have symbols for," Marilyn Monroe once said. And the Democrats' insane hatred of Gov. Palin has to do with the way she rebuts their deepest assumptions -- that all that is young, cool, beautiful, hip and groundbreaking must advance the cause of abortion rights, gay marriage and liberal progressivism. How dare a woman be young, attractive, glass-ceiling-shattering -- and conservative! So they have responded in the crudest fashion, with relentless personal invective and ridicule.

The New Republic suggests that Gov. Palin is seething with resentment at her treatment by the urbane best and brightest of Wasilla. As Sam Schulman noted in this week's Standard, "(Norm) Scheiber spoke to various people from Gov. Palin's past, all of whom have two things in common: Every one of them is smarter than Palin and none of them has been heard of since their encounter with her."

But Gov. Palin has also become a symbol of discontent in certain intellectual quarters on the right. David Brooks, David Frum, Kathleen Parker, George Will and the latest, the beloved Peggy Noonan -- sweetheart of Reagan conservatives -- have joined a chorus of concern about Gov. Palin.

Substantively, these critiques of her leave me cold. Why?

I acknowledge that people will read and respond to Gov. Palin and her achievements differently. It is quite reasonable to suggest she lacks the resume expected of a presidential candidate, although two terms as governor of Arkansas for Bill Clinton and one term as governor of Georgia for Jimmy Carter were enough to insulate these men from any similar critique.

But when I think of Sarah Palin's achievements, I keep recalling a woman friend of mine, the mother of a large family, who was proposed for the board of a prominent New York charity. Several men on the board looked at her resume as "thin" -- it included more than a few years where she did nothing but care for her children, as well as many other years of prominent community service. My friend gained her seat partly as a result of the intervention of a divorced woman, who said, "I can't imagine being the mother of so many children and accomplishing all that she has."

That's my honest reaction to Sarah Palin. I can't imagine being the mother of five and accomplishing all that she has.

If the worst happens and Gov. Palin comes to assume the highest office in the land, I have confidence she will rise to the occasion. I believe this because of her past record -- Sarah Palin always has risen to the occasion in an extraordinary way. An 80 percent approval rating 18 months into office as governor of Alaska is, in fact, extraordinary.

Who would you trust to be president of the U.S. and leader of the Free World: Sarah Palin or Joe Biden? It's not a close question for me.

May I gently suggest the public intellectuals' discontent with Gov. Palin has less to do with who she is than with the contemporary crisis in conservatism brought about by allegiance to George Bush?

It is time -- more than past -- for a deep rethinking of the conservative movement in America. But attacks by conservative pundits on Sarah Palin represent more of a symptom than a step forward.