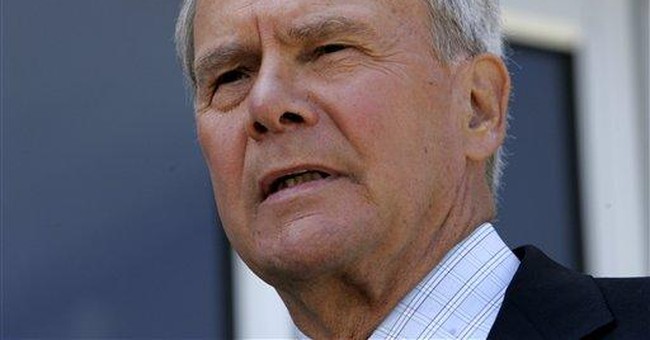 Who can step into Little Russ' big shoes? This week, NBC announced that Tom Brokaw will fill in for former host Tim Russert on the $60-million-a year-franchise "Meet the Press" -- but only temporarily.

"The plan is for me to be in place until they can find somebody who can take it over on a permanent basis," Brokaw said.

Who could that someone be? Like most conservatives, I was a skeptic when NBC News announced a Democrat political operative named Tim Russert was stepping over into the supposedly neutral journalism slot; like most Americans, I became a big fan.

Which is why I'm urging NBC to go outside the journalism box a second time for the rare guy who can continue the Russert tradition of fair, penetrating and effective decency: Stephen Colbert, anyone?

But Stephen Colbert, the man who coined the word "truthiness," can (like Russert) pierce through the multiple veils of doublespeak to get politicians on both sides of the aisle to tell us the truth about themselves, whether they want to or not.

For a another thing, Colbert is brilliant, likable, funny and remarkably evenhanded in skewering sacred cows.

His liberal fan base in the mainstream media, who think of him as a doctrinaire liberal, don't know this. (An NPR reporter expressed the view recently that most of Colbert's fans would be surprised to know he's a Mass-going Catholic who's married with three kids, including a son named after Pope John Paul II.)

What his liberal fans also don't realize is that conservatives love him, too.

"The Colbert Report" rules both sides of the aisle, because in a twisted, brilliant technical performance -- I still can't figure out how he pulls it off -- Colbert manages at precisely the same moment he is making fun of conservatism to simultaneously lampoon what liberals imagine conservatives are like.

Colbert is, like Russert, one of those rare figures who swing both ways in a deeply divided and divisive political culture.

And I suspect that's partly because, like Tim Russert, he's Catholic. A new Pew Forum study released this week confirms that on most issues, Catholic opinion most closely mirrors the American public's at large.

Catholics are also the folks most likely to embody in their own family lives the idea of unity in diversity. We love folks on the other side of the aisle -- politically and morally -- because we are likely to be married to and/or closely related to such folks.

Maureen Dowd, another cradle Catholic journalist, once wrote: "People often wonder what our Thanksgiving is like. It's lovely -- if you enjoy hearing about ... how valiant the president is as he tries to stop America's slide into paganism."

None of us Americans are the political caricatures that get hacked to pieces right and left in the daily media. Colbert is no conservative, but you can tell that he knows and loves people who are.

That Catholics are particularly prone to mirroring mainstream opinions is not something that I think is a particularly good sign for the Catholic faith, by the way; it's a symptom of my church's failure to transmit a Catholic culture and identity under the onslaught of postmodern secularism.

But in the meantime it creates a distinctively Catholic moment in American culture in which Americans who look for some escape from the constant angry crossfire and long for the America of our dreams (where we really are one nation, really under God, committed to liberty and justice for all) seek their news from a journalist who is a decent family man of faith, who maybe happens to be a Democrat but doesn't hate his dad or his brother who aren't.

Stephen Colbert for "Meet the Press," anyone? (But only if we can keep "The Colbert Report" too.)