Madison Gesiotto
|
Posted: Aug 28, 2018 12:01 AM
Share   Tweet
The opinions expressed by columnists are their own and do not necessarily represent the views of Townhall.com. 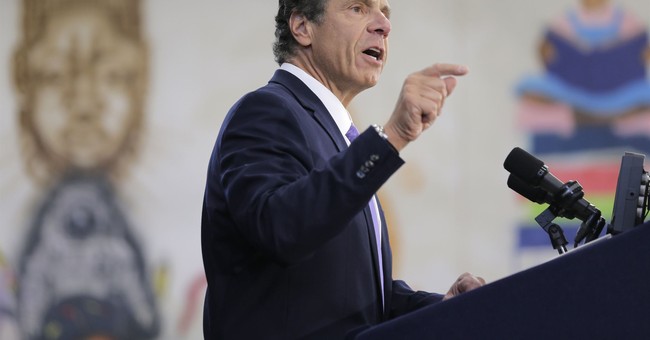 Democrats are showing their true colors -- and they’re anything but red, white, and blue.

Cuomo’s grossly offensive and unpatriotic comments are just the latest episode in a growing catalogue of anti-American words and deeds by Democrats.

One might be tempted to assume that this barely-concealed, if not celebrated, hatred of America was the sole preserve of a radical fringe of the Democratic Party. But one would be wrong. A recent poll found that fewer than a third — only 32 percent — of Democrats are proud to be Americans.

The Democrats’ anti-Americanism has been noticeable for some time. While campaigning for President, then-candidate Obama attacked two foundations of America — the right to bear arms and the Christian religion — and the patriots who cherish them. Working-class voters “get bitter, they cling to guns or religion,” he said.

Following his election, Michelle Obama remarked, "for the first time in my adult life, I am really proud of my country.” President Obama then proceeded to go on his infamous apology tour, slamming and slandering America in front of backward, barbaric societies across the world.

Since then, the Democrats’ antipathy towards America has grown only stronger.

Radical Democrat candidates like Alexandria Ocasio-Cortez and Cynthia Nixon are running on explicitly anti-America platforms. Leading Democrat Elizabeth Warren, widely considered a frontrunner among Democrats for the 2020 ticket, called our entire criminal justice system — the envy of most of the world — racist. In July, Democrat supporters of Rep. Maxine Waters burned an American flag outside of her office. Earlier this year, deputy DNC chair Keith Ellisontweeted in support of the far-left domestic terror group Antifa.

Clearly, the election of President Trump only intensified the Democrats’ contempt for their country and countrymen.

In March, the infamous sore-loser Hillary Clinton asserted that “all that red in the middle” — or most of the nation — was racist and “looking backwards.” Meanwhile, Trump supporters face attacks across the country from radical leftists who seek to destroy traditional American values.

Even the Democrats’ major policies threaten America itself.

The Democrats’ immigration policies promote unsustainable mass migration and undermine border security. Their foreign policy, which favors elite interests and promotes globalization, undermines our national sovereignty. Finally, their social policies, which rely fundamentally on big government, undermine our constitution, the Rule of Law, and the very values on which this country was founded. Taken together, these policies would inevitably spell the end of America as we know and love it.

It’s sad that the political party that traces its roots to patriotic Americans such as Andrew Jackson and Thomas Jefferson is consumed with contempt for the United States of America.

Unfortunately, that’s what happens when one chooses partisanship over patriotism, and political radicalism over practical common sense.

Whatever the reasons driving these Democrats’ hatred of America, that hatred is becoming far too entrenched and dangerous to ignore.