Lou Holtz
|
Posted: Oct 09, 2020 2:00 PM
Share   Tweet
The opinions expressed by columnists are their own and do not necessarily represent the views of Townhall.com. 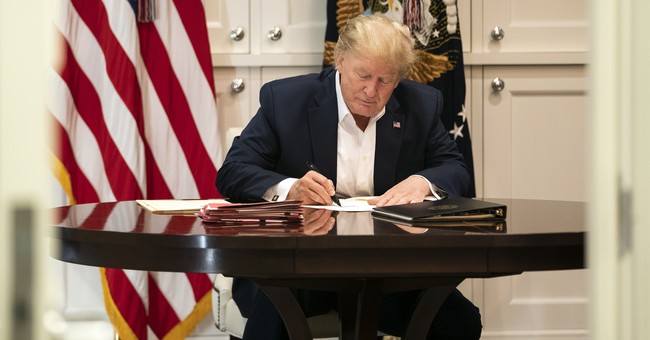 Most voters only “know” President Trump through the lens of media coverage and public policy debates — but that doesn’t come close to capturing the true essence of a man who spends every hour of his working day fighting for the American people.

Whereas the president’s supporters tend to focus on defending him on substantive issues, such as making the case for his America First policy agenda, his critics gleefully assail him on a personal level, hoping to undercut the appeal of his message by demonizing the messenger.

Throughout both the 2016 election campaign and the entirety of his administration, the media has relentlessly scrutinized Donald Trump’s speeches and interviews, regularly taking his humorous remarks and facetious statements out of context.

Democrat nominee Joe Biden even cites one of the most egregious falsehoods as the reason he launched his campaign in the first place, claiming he felt compelled to challenge the President after hearing his appraisal of the tragic events that took place in Charlottesville, Virginia, in August 2017. Hoping to defuse the national tension generated by the partisan violence, President Trump noted that there were plenty of “very fine people” on both sides, explicitly holding them up as a contrast to “the neo-Nazis and the white nationalists,” who he said “should be condemned totally.”

Predictably, the left employed the same strategy following the recent presidential debate between Donald Trump and Joe Biden, launching a full-on smear operation as soon as the event was over designed to make the president seem like an aggressive bully rather than a confident, assertive leader compelled to forcefully defend himself against a tag-team effort by his opponent and the debate moderator.

At one point in the debate, for instance, Biden falsely accused President Trump of suggesting that Americans should inject themselves with bleach to help fight the coronavirus — a remark that was clearly never intended to be taken seriously.

“That was said sarcastically, and you know that,” the president said in response to Biden’s cheap jab.

While only a committed partisan could possibly believe that Trump was literally encouraging people to inject a toxic chemical into their veins, the left’s relentless personal attacks have had an impact on a different level: obscuring President Trump’s passion and love for his family, his friends, and, most of all, the American people.

Unlike most politicians, President Trump doesn’t resort to fake displays of empathy such as kissing babies or crying on camera — but that doesn’t mean he is devoid of compassion or dislikes babies.

I have spoken with the president many times in recent years, and I have always been struck by how much he genuinely cares about American workers. While traditional politicians are loyal to their party platforms, President Trump shapes his own policies around the needs of his constituents. For Donald Trump, improving the livelihoods of American families is truly the primary objective of his entire political agenda, from his pro-growth economic policies to his commitment to getting our troops out of endless foreign wars.

The president has an exceptional appreciation for the brave men and women of America’s Armed Forces. Anyone who has ever been invited to a meeting at the White House knows that the president doesn’t hesitate to keep political people waiting or postpone less-pressing commitments if he is meeting with U.S. veterans or the families of our fallen heroes. This side of him tends to receive relatively little public attention, though, because he prefers not to sully those interactions by turning them into a political sideshow. Instead, his public statements emphasize the concrete policy actions his administration has taken on behalf of veterans and service members, such as rooting out corruption and ineptitude at the VA.

The American public doesn’t often get to see the human side of Donald Trump, and when that side does peek through his no-nonsense exterior, the media tend to ignore or misrepresent it. Perhaps there’s no better time than now, as the nation anxiously awaits word on the president’s well-being after his COVID diagnosis, to reflect on the fact that he experiences the same physical frailties and vulnerabilities that we all do.

After I did some campaign appearances in 2016, President Trump was informed of how sick my wife, Beth, was and he called her and spoke with her for 10 minutes. His conversation was to encourage Beth about how important she was to her family. It was a genuine concern for an American citizen. Beth passed away June 30, 2020 or she would have helped me write this op-ed. She prayed daily for President Trump.

Whenever I spoke with him over the past few years, his focus was always on what he could do to help others. I have never seen him wallow in self pity when the media has been so unfair. He is always upbeat, positive, and determined to help every citizen in the country regardless of their political beliefs or their background.

When I played golf with him, he counted every stroke, never moved the ball…he was the most honest golfer that I have ever played with. I have never seen him one-on-one where he did not treat everyone around him with dignity and respect.

The liberal media want you to think that Donald Trump is devoid of normal human emotions, but that’s completely at odds with the man I know and respect. I have met no finer patriot than President Trump — and it's a shame that the Democrats and the liberal press have prevented so many Americans from fully getting to know the true nature of our leader.

Lou Holtz was the head football coach at the University of Notre Dame 1986 to 1996. He is a Florida resident.