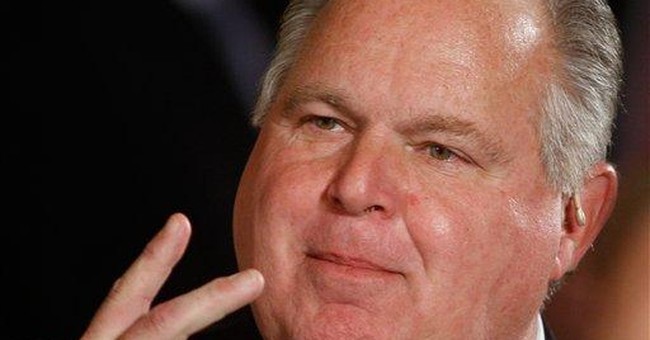 Last week, commenting on the adulation President Obama enjoyed from the media on his latest European tour, the blogger Anchoress said some in the media would suckle at his breast “if only he’d lactate.”

That comment came to mind when viewing an MSNBC segment regarding a recent statement by Rush Limbaugh.  The topic of discussion was Limbaugh’s comment, “If al Qaeda wants to demolish the America we know and love, they better hurry, because Obama is beating them to it."

Two MSNBC anchors, Tamron Hall and David Shuster, joined by liberal guest Bill Press, triple teamed Republican strategist Alex Conant, shouting him down for daring to suggest that the network had not only failed to meet Rush Limbaugh’s challenge to go an entire month without mentioning his name, but that their coverage of Limbaugh’s comments bordered on obsession.

In the interview Hall became defensive in her response to Conant’s comments.  She claimed her network was just doing their job.  “Oh, you know – okay, that's ridiculous, absolutely. You know, I don't know if you've ever, ever watched Keith Olbermann, who just obliterated Rush Limbaugh on this topic…We have a right to cover people who are speaking out. This has nothing to do with this network. You tell me now if it is right…Is it right to compare the President of the United States to Al Qaeda? Do not try to call out this network for doing our job.”

I just want to make sure I have this right – an MSNBC anchor is asking if it is “right” to compare the President to Al Qaeda?  I couldn’t help but wonder how different MSNBC’s coverage would be if they applied this “Rush standard” to all their reporting.

Maybe someone should ask Hall whether it was “right” to compare the President to Hitler as Keith Olbermann (the man she said “obliterated” Rush on this topic) has done so many times.  Was it okay when Keith Olbermann said, “Mr. Bush, you are accomplishing in part what Osama Bin Laden and others seek--a fearful American populace, easily manipulated, and willing to throw away any measure of restraint, any loyalty to our own ideals and freedoms, for the comforting illusion of safety.”

Olbermann said President Bush was accomplishing what Bin Laden was trying to do to America?  That sounds pretty close to what Rush Limbaugh said.  In fact, it is almost indistinguishable.

Kyle Drennen at Newsbusters.org noted that “apparently Hall forgot that her colleague Keith Olbermann, whom she touted earlier, had claimed that ‘Fox News is worse than Al Qaeda’ in a 2007 interview with Playboy magazine. More recently, last month Olbermann exclaimed that former Vice President Dick Cheney was ‘as insane as any terrorist.’ Neither Hall nor any members of Democratic Party ever apologized for such vitriolic rants.”  Yet Hall was asking a Republican strategist to defend Limbaugh’s comment.

Shuster later jumped into the mix saying “if Bill Press said some of the outrageous things about say George W. Bush, or any Republican, that Rush Limbaugh has been saying about Barack Obama, Alex, the Republican Party would be all over him, Fox would be talking about Bill Press nonstop, I promise you.”

Hall worked in yet another defense of the extent of coverage of Limbaugh’s statement.  “Hey, this is where we work. But I mean we can – if we are doing something wrong – that's what I think is just kind of lame, to say ‘oh, don't talk about us, don't talk about me, let me see if MSNBC’s ratings are fine – he’s got a right to say it, but we have a right to discuss ‘Mr. Bouncy, Bounce.’”

First Hall cited Keith Olbermann when criticizing the comparison of the President to al Qaeda., then when trying to justify the obsession her network has with criticism of a radio talk show host she called Rush Limbaugh “Mr. Bouncy Bounce.”  You can’t say MSNBC does not have standards.  They are just for select groups of individuals – people like Rush Limbaugh, and George Bush and Dick Cheney and Sarah Palin and Carrie Prejean.

Why does MSNBC hold Rush Limbaugh to a higher standard of scrutiny than they do President Obama or any other liberal elected official or mouthpiece, including their own pseudo journalists Chris “tingly leg” Matthews, David “tea bagging” Shuster or Keith “O’Reilly obsessed” Olbermann?

Why is it that anything the least bit provocative that Limbaugh says is dissected and repeated endlessly by the on air personalities at MSNBC, but when those on the left like  Janeane Garofalo call hundreds of thousands of peacefully protesting Americans a bunch of racist “tea bagging rednecks” who were “hating a black man in the White House” they don't seem to find the energy to scrutinize?

If those at MSNBC want to know why Fox News regularly beats them so decidedly in the ratings, they need look no further than their “Rush standard.”