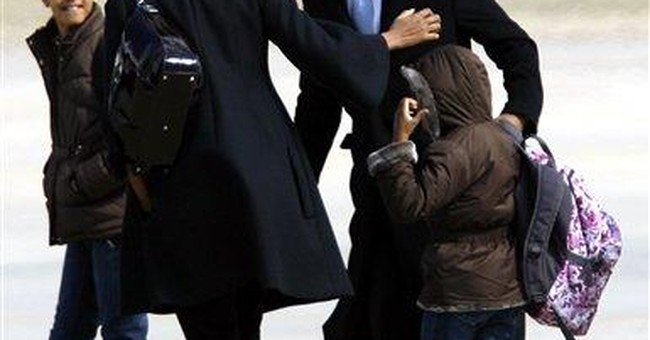 If you’ve heard it once, you’ve probably heard it a hundred times – in politics, perception is reality. In the age of Obama, that is more true than ever. Facts don’t always matter so much in politics. It’s more about image.

“Peter Perfect” is a reality show my family watches from time to time. The star of the show, Peter Ishkans, goes into struggling small businesses and helps them create a new look and a new marketing strategy to hopefully set them on the track to success. Ishkans sums up the philosophy behind his approach at the beginning of each show – “If you change your image, you will change your life.” The same could be said of the political world on a broader scale. If you create a successful image, you can change a country. If that country is America, you can even change the world.

A candidate with the right marketing strategy and willing outlets to broadcast that message can sell the public on just about anything. That is the reality Republicans have to recognize and address if they don’t want to remain the minority party.

Barack Obama the living, breathing human being was not elected President. Barack Obama the Messianic savior who would solve all the problems in the world was elected – along with his amorphous promise of hope and change.

Republicans have been frustrated for years by the disconnect between what voters say they believe and how they vote. On issues like partial birth abortion, immigration and gay marriage the opinions held by the majority of the public do not necessarily translate into the election of the candidates holding like views.

Public opinion polls consistently show an overwhelming majority of Americans identify themselves as “conservative,” even as recently as 2008 when Republicans, the more conservative of the two parties, suffered huge electoral losses. That the candidate with one of the most liberal voting records in the Senate was able to win the presidential election with an electorate that identifies itself as conservative shows just how little facts matter in the world of politics. Hard facts, actual votes he cast on a variety of specific issues in the Senate, could not compete with the media’s perpetuation of the non-specific message of hope and change and love and sunshine Barack Obama put forth.

Those in the media chose not to inform the electorate of Obama’s liberal voting record, or to ask him many hard questions. John McCain and too many other Republicans did not do enough to get that information to the voters. Republicans and conservative Americans are paying the price now.

If early interviews and news reports are an indication, most in the media will continue to assist President Obama as they did Candidate Obama in presenting a favorable image to the American public. Republicans can do as they have in the past and allow the media’s predetermined narrative to be fed to the public unchallenged, or they can use every opportunity they are on radio or television to give the public the facts and to argue for their conservative policy positions.

Charles Krauthammer wrote about how little attention the “near-miracle abroad” drew from the media when Iraq recently held provincial elections with no violence and little U.S. involvement. The new facts on the ground in Iraq over the past few years did not match the image of the situation in Iraq the Democrats and so many in the media worked so hard to create and maintain. When the situation on the ground in Iraq began to change and progress could be seen, those in the media no longer found the story worthy of much attention and Republicans were not successful in getting that information to the public.

Good economic news during the Bush years was often downplayed or ignored as well. When Democrats blamed a slow economy on the Bush tax cuts rather than on spending, those in the media did not report to the public that tax revenues had actually increased. Again, Republicans were not successful in getting that information to the people.

In the past few weeks, Democrats have attempted to sell the biggest spending bill in the history of the world under the name of “stimulus” and the media have been largely willing to help them. But this time Republicans were determined to put forth their own message – one of fiscal conservatism. Much of the information about the true nature of the so-called “stimulus” bill made it to the public and the reaction measured through telephone calls and faxes to Congress was amazing. A poll released this week by Rasmussen showed that only 38 percent of Americans believe the bill will help the economy, while 53 percent believe it will either hurt the economy or have no impact.

Hopefully Republicans have learned that when they stick to their conservative principles and speak out forcefully, Americans will hear their message. After all, most Americans identify themselves as conservative.

Over the next few years Democrats, led by President Obama and aided by their friends in the media, will continue to sell the stimulus bill. If the economy improves, the bill will receive all the credit whether it had a positive impact or not.. If the economy does not improve promptly, the message Democrats will sell to the public will likely be that additional spending and government control are needed. If Republicans fail to loudly and forcefully present their message, and to relay facts the media doesn’t choose to report, not only will Republicans lose big in the next election, but the country will too.

Republicans have suffered over the past few elections because on some issues they abandoned their conservative principles, and on others they were unable to successfully convince voters that they shared their image of what America should be. While they lost the vote on the “stimulus” bill in the Congress, the overwhelming majority of Republicans stood firm on conservative principle and won the battle in the arena of public opinion. If they continue to do that, by 2010 the number of votes they will be able to muster in the House and Senate will follow suit.