Are we Starting a Military Space Race?

Lorenzo Ortega
|
Posted: Sep 08, 2018 12:01 AM
Share   Tweet
The opinions expressed by columnists are their own and do not necessarily represent the views of Townhall.com. 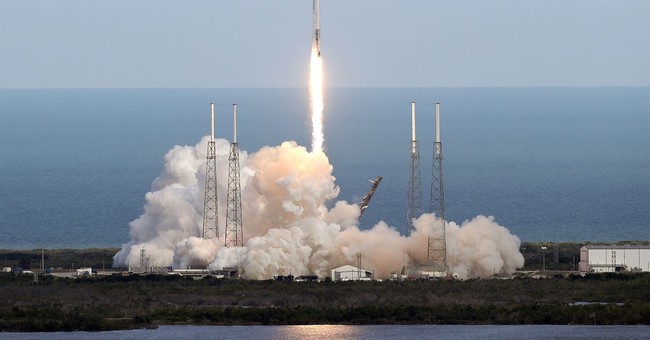 Starting? When did it stop? The real question is: who’s paying for it now?

Space has just come to the forefront because we now recognize how critical Space has become to our life. Civil space technology is now WAY ahead of our military. Strangely this is more a race between US Venture Capitalists and the Russians, Chinese, North Korea and Iran. The military is along for the ride. The Space Race has become one where our commercial companies are now developing and providing capabilities at a price that our military can only dream of and foreign country militaries just read about in shock and wonder if it’s all made up as a press relations stunt, right until they have to block it from the internet of their citizens, like Google maps.

Space X and Blue Origin with their reusable rockets have shown us stunning capabilities to retrieve their boosters. Google maps with its extraordinary zoom and search capability did not exist, even in the classified world, the year before it came out to the public in 2005. Neither Russia nor China has even bothered to build this capability, as Google is already there. Baidu maps, from the Chinese search engine, is beyond crappy.

Funded by venture capitalists, Hawkeye360 will have satellites soon with the capability to locate electronic signals by cubesat. They will be able to provide us daily updates of all radio transmitting objects. Capella, with its distributed miniature space based synthetic aperture radar cubesats by the dozens, will provide us radar tracking of objects globally and continuously. Planet’s Dove satellite, an orbital imagery bird is delivering the same cubesat capability to provide surface imagery for less than current commercial imagery companies.

They are all using cubesats. A cubesat is a small satellite about the size of a backpack. They are launched by the dozens to orbit to collect small bits of data. This data, think radar, imagery or radio signals, is then “stitched” together on the ground using software – a specialty of the Silicon Valley and US venture investors.

When you stitch this data together, you now know the global location of all vehicles: ground vehicles, ships, airplanes and missiles on the ground or in flight. This information is updated depending on the need of the user. This could be used to track delivery vehicles, aircraft for the FAA, maritime shipments, cell phone usage, pipeline monitoring, city planning or more. The civil uses of these capabilities are endless. This location information is critical to the military but is used much more by the civil users.

There is an additional effect. This capability puts all governments on notice that what they do, globally, is available to the public. Hiding and lying is going to get even more difficult.

This technology is all paid for by investors – NOT the US government.

There were civilian Ford trucks before they had military Ford trucks. The thing that tells us we're ready for a Space Force is that our commercial space systems are out in front of our military. Our military will now never catch up with the civil space side. The civil space companies will always be trying to develop better systems to increase their profits. Without profit motive, the US military will never move that fast.

President Trump saw this.  This was his brilliance in recognizing it was time for a Space Force.  Not stuck in the confines of “this is what we did last year”, he has told the military to develop a new way to buy things. They need to only look around. All the parts are there. No billions required to develop new technologies. Use a small share of the commercially available Space to drop our costs and increase our capability.

As the US drives the research and technology, our adversaries will follow. How do we keep them at bay and keep costs from escalating?

China and Russia have never been able to keep up with Silicon Valley. With the Trump initiatives to reduce Chinese access to technology through forced turnover or cyberwarfare, they will begin to drop back and will eventually fall off the radar screen, like Russia has over the last 3 decades.

The way we stay ahead is that we develop a Space Force that can respond to our technology in a military way because we're already using the technology throughout our civil lives. We, the people of the United States, were the first to really figure out Space. Much like the automobile, we figured out how to use them effectively, and inexpensively, way before any other countries. We can take our "First" status in civil space capability and leverage that experience into our military and integrate things so tightly that the effectiveness is simply amazing, as amazing as our special operations forces in Syria crushing ISIS.

How do we stay ahead of the Russians, Chinese, Iranians and North Koreans?

We take the commanding lead we have from our civil space, stay out of their way for profits, and we keep America First.