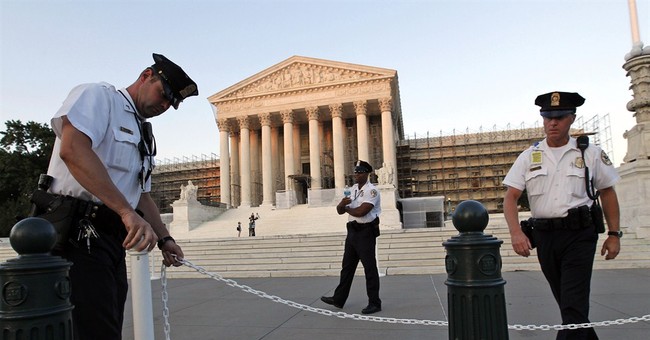 Many of the important battles for freedom are being fought in courtrooms across the country. There’s been no greater friend to free market soldiers than the Institute for Justice. Senior Attorney Clark Neily has been at the forefront of some of their most important cases, most notably serving as co-counsel in District of Columbia vs. Heller. In this historic case, the Supreme Court of the United States ruled that the Second Amendment protects a person’s right to own a gun for self-defense.

In his new book, Terms of Engagement: How Our Courts Should Enforce the Constitution's Promise of Limited Government, Neily writes about the abuse by local, state and the federal government and the courts’ dereliction of duty in performing the role assigned to it by America’s Founders.

Pardon every non-violent offender convicted under an unconstitutional federal law.

Jeff Drury, who I had for fourth and fifth grade, in Lincoln, Massachusetts. He was old school: from England, incredibly high standards, tough but fair -- and he had us call him "Jeff" instead of "Mr. Drury." He could get away with that because there was never any doubt about who was in charge of his classroom. In fact, there was a rumor (obviously untrue, even at the time, but strangely compelling) that he had once picked up a student up by her face and banged her head against a chalkboard for disrespecting him in class. Surprisingly, this made nearly everyone in the third grade want him for their teacher the next year. We would take the last three weeks off from course work each year and put on a Shakespeare play (in public school!). I got to be Julius Caesar with a bag of fake blood inside my toga for the big death scene. I have no acting talent whatsoever, so a character who spends half the play laid out dead on a marble slab was perfect for me!

Sail around the world in my own boat writing travelogues and restaurant reviews.

Walking down the front steps of the Supreme Court on the day my co-counsel (Alan Gura and Bob Levy) and I won the Heller gun case. It's not every day you get to help revive one-tenth of the Bill of Rights.

MasterChef Junior, a cooking competition for kids. My wife Nicki and I enjoy cooking together and watching cooking shows. It is incredibly humbling to see how talented these kids are. We're expecting our first child, a boy, on November 1. We wouldn't be sad if he turned out to be a prodigy in the kitchen.

Honestly, it was a mooring line -- a big, thick rope -- that my dad brought home from Maine, where his younger brother was a boat captain. My parents hung the rope from a tree outside our house, and I spent hours climbing, swinging, and doing tricks on it. Sometimes the simplest presents are the best.

We had a "white elephant" gift exchange at the office Christmas party. Whichever one of my coworkers ended up with my present could pick a famous author and I would write a short story in the style of that author with the coworker as the hero. It turned out to be IJ's head of communications, John Kramer, and he chose Hemingway. Here's the last paragraph of the story: "Kramer smiled and turned and walked out the front door of the saloon into the street. To kill or die. Like a man. In the rain."

I remember my dad telling me when I was about 11 that the only thing wrong with a depressed and dysfunctional friend of his is that he seemed to think of himself as a victim of forces beyond his control -- as if the world were out to get him and there was nothing he could do about it. The implicit point was "Don't ever think of yourself that way." Boy, was that good advice.

My wife Nicki, because she's pretty, cool, and topical; my friend Bob Levy, who is chairman of the Cato Institute and with whom I clerked after law school, because he is brilliant and wickedly funny; and my Institute for Justice colleague Dick Komer because he has no internal editor -- none whatsoever.

Actually, I was just reading my own book, "Terms of Engagement: How Our Courts Should Enforce the Constitution's Promise of Limited Government," because I'm being interviewed about it later today and I've never read the final version. (Sorry for the shameless plug!) Also on the list: "Jury Nullification" (yes, please), by Clay S. Conrad; and "American Founding Son: John Bingham and the Invention of the Fourteenth Amendment," by Gerard N. Magliocca. John Bingham was the principal author of the Fourteenth Amendment, the most important amendment to the Constitution and perhaps the most misunderstood. I want to know everything about it.

I'm actually on the other side of that issue. I sue bureaucrats and try to undo the handiwork of legislators who enact unconstitutional laws. I decided to do that after I clerked for a federal district court judge in Washington, D.C., right out of law school. I never once saw a government lawyer take responsibility for anything the government did, no matter how awful. Instead, the government's position in court tends to be like that of a three-year-old child: "Nothing bad happened. If something bad happened, we didn't do it. If we did do it, it wasn't our fault -- it was some guy who works for us but for whom we have no responsibility. Also, citizens have no standing to be in court, and we're not liable for anything. Nyah, nyah!" The greatest threat to the future of America is unaccountable government, bar none. My colleagues at the Institute for Justice and I are fighting to hold the government accountable when it violates people's rights. Best. Job. Ever.