Lindsay Marie
|
Posted: Jul 13, 2019 12:01 AM
Share   Tweet
The opinions expressed by columnists are their own and do not necessarily represent the views of Townhall.com. 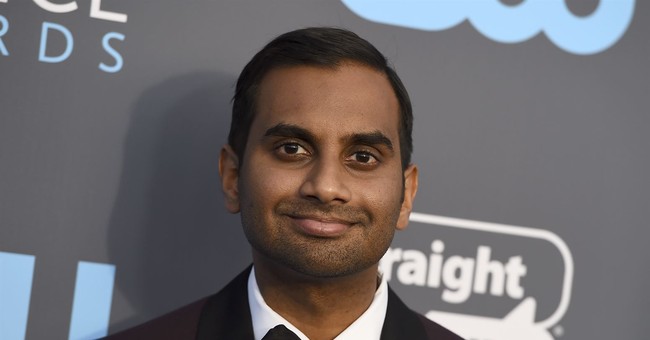 A year and a half after being publicly humiliated by a #MeToo scandal, comedian Aziz Ansari is punching back against progressive woke-culture in a way that few mainstream comedians have dared. In a new standup comedy special released by Netflix on July 9th entitled Right Now, Ansari roasts cultural appropriation, political correctness, and everything in between.

In 2018, a website called Babe.net posted a story from an anonymous source claiming that Ansari tried to pressure her into having sex while on a consensual date. The woman became uncomfortable, and Ansari called a car for her.

At the time of publication, the story sparked a huge debate in the #MeToo movement between those who were outraged and those who didn’t believe Ansari should be in the same category as alleged rapists such as Harvey Weinstein. Sexual assault claim or not, Ansari was censored and blacklisted.

Almost two years later, Ansari returned to the microphone, not as his opponents would have wanted, but as a more unapologetically authentic version of himself. Trading in his PC-police badge and ditching his usual suit for jeans and a Metallica t-shirt, Ansari clapped back at the culture he’d arguably been part of, and whose anger may have overcorrected.

Talking cultural appropriation and wokeness, Ansari rehashed the outrage over the white high school student who wore a traditional Chinese dress to prom. Even after the girl publicly shared that the dress was her way of sharing an appreciation for the Chinese culture and that she meant no disrespect, keyboard warriors continued to try and out-woke each other, according to Ansari.

When one person alleged she stole from Chinese culture, another replied, “actually the Chinese stole that from Malaysia.” Mocking the first commenter, Ansari responded, “You just got out-woked. You thought your eyes were open; this other dude doesn’t even have a forehead. His eyeball just keeps going…just so he can see all the injustice.”

As Ansari continues to lampoon woke culture, he rhetorically asks the audience if there is a secret “Progressive Candy Crush” game in which white people keep tallies of things they do for minorities and equality.

Pretending to be “Brian”, a “Progressive Candy Crush” player cashing in on points, Ansari shares that he told an African American friend that Black Panther should have won best picture, tweeted support for a new documentary by a lesbian filmmaker, Instagrammed love for Colin Kaepernick, and wrote a lengthy Instagram post calling himself out for white privilege based on something he did in 2015.

The prize for being the most woke according to Ansari: “a bunch of Instagram likes from other white people playing the same game.”