Lindsay Marie
|
Posted: Jan 23, 2018 12:01 AM
Share   Tweet
The opinions expressed by columnists are their own and do not necessarily represent the views of Townhall.com. 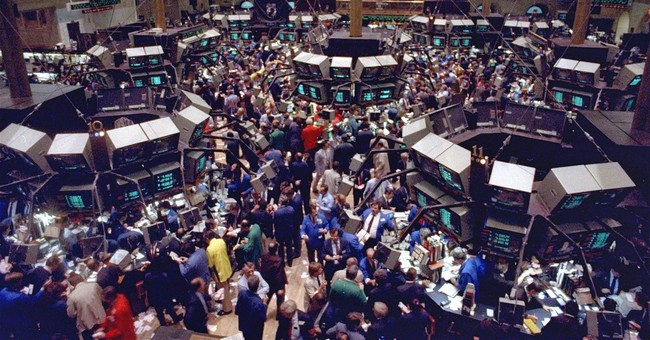 Advances in technology have led to the recalibration of most facets of the free market economy, while the drafting and execution of contracts have relatively remained the same for decades. That may no longer be the case due to a blockchain platform called Ethereum.  Ethereum is a decentralized platform that runs specific types of contracts called “smart contracts.”  Smart contracts are self-executing contracts that contain the terms of the agreement in lines of code.  Smart contracts can increase trust which is the cornerstone of an operational free market economy.  Just as the development of digital communication increased social interaction by leveling the playing field to participate, the development of smart contracts can grow the global free market by lowering one of the most significant barriers to entry; trust, ultimately increasing participation.

Although the technology and applicability of smart contacts may seem futuristic, the concept is nothing new.  In fact, most people have unknowingly participated in a self-executing contract by purchasing an item from a vending machine. The vending machine contains both the terms of the agreement (price per item) and the property (items.)  When a consumer selects an item, they effectively agree to the terms, or price, programmed in the vending machine.  Once the machine is in posession of the correct amount of money from the consumer, the machine then transfers the property or item to the consumer.  Smart contracts stem from the same principles, but they run on a virtual platform called Ethereum as opposed to a physical one.

Ethereum is a globally shared decentralized platform derived from blockchain technology.  To simplify, one can think of Ethereum as a shared, multi-user, virtual computer that is accessed globally. Because it utilizes blockchain technology, Ethereum has no physical location or single point of entry and resides across physical computers all over the world.  This makes the platform near impossible to breach or shut down.  Just like a traditional computer, Ethereum can be used to run applications including smart contracts.

In a technical, non-legal sense, smart contracts are nothing more than lines of code generated by developers.  Just like traditional contracts, smart contracts contain conditional statements.  A conditional statement merely instructs action in a given scenario.  For instance, in the vending machine example, a conditional statement might be interpreted as “if $1.00 is received, then dispense product.”  When $1.00 is received the machine automatically executes the contract by dispensing the product without the honesty of a party or assistance of any third party, this is true of smart contracts as well.  Once a scenario defined in a conditional statement exists, the corresponding action such as the transfer of money or property is instantaneously employable without the requirement of honesty or a middle man. It’s this intuitive, trustworthy, and autonomous nature that can be a gamechanger for businesses struggling to enter or thrive in the global free market economy.

Free market economies rely on trust which can be difficult to ensure through traditional contracts.  Parties may be hesitant or become less likely to transact with those in different geographic areas who are subject to different types of laws and potentially contrasting forms of government.  The hesitation is mainly because traditional contracts require the trustworthiness of a party or assistance of a middle man for execution.  Traditional contracts are rooted in the trusted belief that a party will act how they say they will regardless of what happens after signing the contract.  Simply put, contracts are only as good as the people signing them.

Fear of potential legal issues is the only incentive parties of traditional contracts have to abide by the terms of the agreement.  That fear certainly does not deter parties from breaching contracts even if they reside in the same geographic area, are subject to the same laws, and reside under the same type of government.  One could rationalize that the threat of potential legal issues may be even less of a deterrent for parties across borders, under different laws, and under a different rule.  In the event a contract is breached, the only option for enforcement is through a legal body.

When a legal body is asked to enforce a contract, the requesting party must trust that the body will correctly interpret the agreement, adhere to applicable case law, and will make the correct decision.  If contracts are only as good as the parties who sign them, then the legal system is only as good as the decisions issued by it.  Legal bodies are supposed to be impartial; however, they consist of humans who are not perfectly impartial.  Depending on the particulars of the contract and geography of parties, there may be issues of corruption, bias, mutability, and hostility with the legal body hearing the case.  Simply put, there is no guarantee of enforcement of traditional contracts.

Smart contracts offer businesses something traditional contracts cannot; trust, which is what the free market economy operates on.  Smart contracts are intuitive and self-executing thus removing the potential for lack of execution stemming from human free will and need for truly impartial, non-bias enforcement.  By removing these possibilities, businesses can transact with those they may not have trusted or felt comfortable transacting with previously.  New relationships between businesses lead to increased innovation, development of new products, and ultimately economic growth.  Just as smart phones allowed for greater participation in social interaction, smart contracts will allow for greater participation in the global free market economy.