Linda Chavez
|
Posted: May 10, 2019 12:01 AM
Share   Tweet
The opinions expressed by columnists are their own and do not necessarily represent the views of Townhall.com. 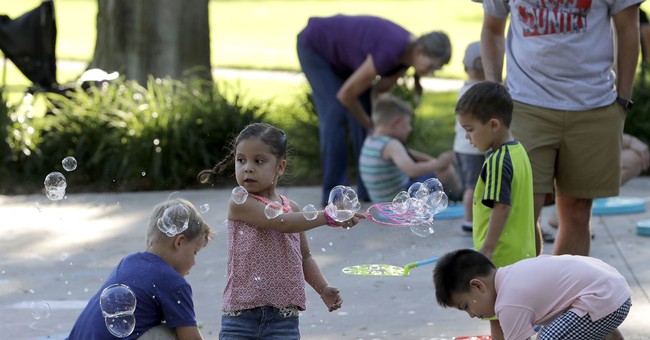 As the country grows more ethnically and racially diverse, Americans' attitudes towards diversity seem pretty sanguine. Most Americans, regardless of ethnic or racial background, think diversity is a good thing and makes the nation stronger. More than three-fourths of all Americans say diversity is either very good (57%) or somewhat good (20%) for the country, with little difference among specific racial or ethnic groups on this measure, according to a new survey of attitudes by the Pew Research Center. More highly educated people of all groups are the most enthusiastic, but even among whites with less than a high school degree, 63% say diversity is very or somewhat good for the country, about the same proportion as among Republicans (65%).

This is very good news, though there was still some concern on the part of many Americans about whether our growing diversity makes it harder for policymakers to solve problems. Americans were pretty evenly divided on this issue, with a plurality (47%) saying it does and 45% thinking it doesn't make much difference. But there was more divergence in opinion among different groups on this question than on many others in the survey, with a low of 30% of blacks who believed diversity made it harder and a high of 52% of whites who also thought so. Still, the responses to these questions makes it clear that, despite so much evidence of a racial divide in this nation, Americans are more alike in their attitudes on race and ethnicity than we might believe by watching cable news or looking at social media posts.

But perhaps the most heartening finding in the survey had to do with whether race and ethnicity should be a factor in hiring and promotion decisions. Overwhelmingly, Americans want applicants' race and ethnicity left out of the decision-making process in employment. Nearly 3 in 4 adults said that only qualifications should be considered in hiring and promotion. A majority of each group, including blacks (54%) and Hispanics (69%), agreed, even if it resulted in less diversity. Republicans were more in favor (90%) of race-neutral hiring and promotion, but even among Democrats, nearly two-thirds favored qualifications alone to be the deciding factor. Although the survey didn't ask about university admissions, similar surveys over the years show that most Americans are skeptical of using race or ethnic group as a major factor in deciding who gets into college as well.

The takeaway from the latest survey suggests that Americans are comfortable with diversity but don't believe that it should be an end in itself, as some progressives seem to suggest. Americans would still rather see the most qualified person picked for the job, even if it doesn't increase diversity.

The biggest area of divergence in opinion among groups occurred over whether students should attend schools in their local communities, even if it means most schools are not racially and ethnically mixed. Nearly two-thirds of whites favored community schools, while an even larger proportion (68%) of blacks placed a higher priority on students attending racially and ethnically mixed schools. Hispanics and Asians were about equally divided over the issue.

Not surprisingly, given the nation's increasing diversity, most Americans now have at least some contact with members of different racial and ethnic groups. Except for contact with Asians, the smallest of the four groups included in the survey, at least some inter-group contact is common among whites, blacks, and Hispanics. And Asians have fairly high levels of at least some contact with all other groups, even if others experience less contact with them, due largely to their lower numbers and less widespread geographical distribution. We shouldn't be surprised at these results, but they do mark a change from when groups used to be more socially isolated by race and ethnicity.

The Pew survey should give us hope that we are moving toward a point when racial and ethnic divides become a thing of the past. There are certainly those forces that want to keep us divided along color lines, but they are relatively small, no matter how loud their voices sometimes seem. Diversity can't be ignored, but neither does it need to be forced. Diversity has simply become a fact of American life -- one with which the overwhelming majority of us are perfectly comfortable.