Enemy of the People

Linda Chavez
|
Posted: Oct 12, 2018 12:01 AM
Share   Tweet
The opinions expressed by columnists are their own and do not necessarily represent the views of Townhall.com. 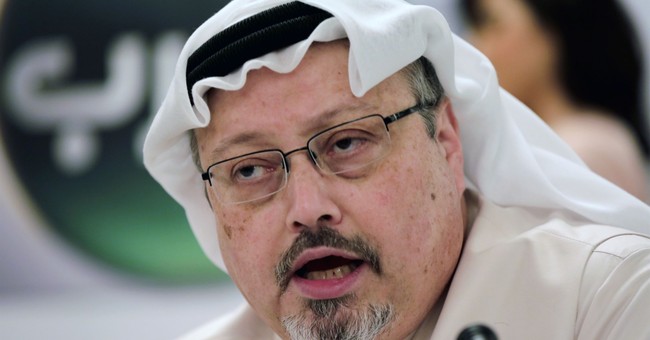 When President Donald Trump called the press the "enemy of the people," he wasn't only speaking to his pep rally audience. Autocrats and despots around the world were listening. Right-wing governments from Poland and Hungary to Turkey and the Philippines have cracked down on freedom of the press over the past two years, with little worry that the Trump administration would raise a fuss. But last week's disappearance and presumed murder of Washington Post columnist Jamal Khashoggi by a Saudi hit squad in Turkey should alarm even this tone-deaf White House that words have consequences.

Khashoggi, a U.S. resident who was born in Saudi Arabia, wrote frequently about his native country with the fearlessness any opinion writer for an American newspaper enjoys. He called shots as he saw them. When Saudi Crown Prince Mohammed bin Salman, the heir apparent to his father, King Salman, led economic reforms and lifted barriers to female driving, Khashoggi praised the moves. But he was also a critic of the crown prince's autocratic methods. Writing in the Post last year, Khashoggi said, "The crackdown on even the most constructive criticism -- the demand for complete loyalty with a significant 'or else' -- remains a serious challenge to the crown prince's desire to be seen as a modern, enlightened leader." Such criticism of your country's leader might get you disinvited from dinner parties in Washington but can get you killed in many places in the world. What is unusual about this case is that the assassins thought they could act with impunity against a permanent U.S. resident who expressed his views in an American paper.

The Trump administration is in a bind over the Khashoggi disappearance because of White House senior adviser Jared Kushner's close ties to the crown prince, who is presumed to have ordered the abduction and murder of Khashoggi. The president's son-in-law has operated throughout his tenure in the White House with an expansive portfolio and little supervision or restraint from foreign policy experts and appointees, including the national security adviser and the secretary of state. Kushner was instrumental in making Saudi Arabia the president's first overseas stop, in May 2017, and reportedly talks frequently with the 33-year-old crown prince, whom he most likely sees as a man much like himself -- young, ambitious, used to getting pretty much anything he wants. The administration has made Saudi Arabia the linchpin for its relations with the Muslim world and put it in an increasingly powerful position in its Middle Eastern policy.

It would never occur to Kushner -- or even Trump -- that the Saudis might interpret their new standing as giving them carte blanche to deal with a Saudi dissident. Whereas we view someone like Khashoggi as a U.S. resident deserving the same protections and guarantees that anyone who makes his home in America does, the Saudi regime considered him a subject of the kingdom and a domestic threat. It doesn't help that Khashoggi was a member of the Fourth Estate, which Trump constantly rails against. It is altogether possible that the Saudis expected that the administration wouldn't raise a fuss if a Saudi-born journalist simply disappeared.

Congress, however, is not taking the Khashoggi case lightly. A bipartisan group of senators has already written to President Trump to invoke the Magnitsky Act, which gives the president 120 days to determine whether to place sanctions on any foreign person, including the crown prince, involved in Khashoggi's disappearance. The invoking of the Magnitsky Act, named after a Russian dissident murdered by the Putin regime, ought to be a warning to this White House, as well. Surely, Kushner will see it as such, seeing as he and the president's son Donald Trump Jr. were among a group of campaign officials who met in 2016 with a Russian lawyer whose portfolio included seeking a repeal of the Magnitsky Act, in the infamous Trump Tower meeting that has become a focus in special counsel Robert Mueller's investigation.

In coddling dictators and defining institutions of democracy as enemies, Trump has embarked on a dangerous path, and not even he knows where it will lead.