Linda Chavez
|
Posted: Aug 24, 2018 12:01 AM
Share   Tweet
The opinions expressed by columnists are their own and do not necessarily represent the views of Townhall.com. 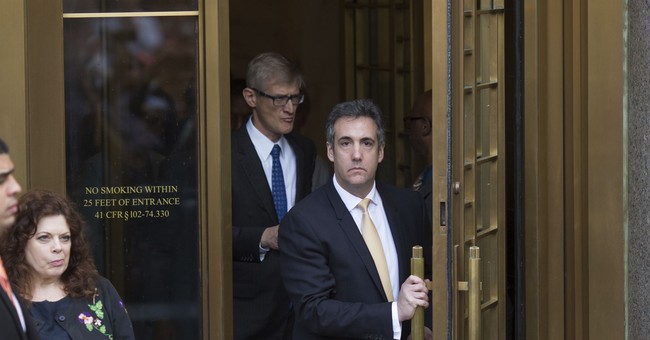 Hell hath no fury like a toady scorned. Michael Cohen, to all appearances, seems a hapless sort -- a lawyer with no clients, a millionaire whose wealth from New York taxi medallions faced diminishing in the Uber age, a Donald Trump loyalist who received no appointment to a government job, a fixer who would "take a bullet" for a man who disdained and finally discarded him. You can feel almost sorry for the fellow -- until you remember what he's done to others on Trump's behalf. Now he's willing to own up to some of his misdeeds and point the finger at his unindicted co-conspirator, the president of the United States.

There has been nothing quite like this week in U.S. history, with two of the president's men, former campaign chairman Paul Manafort and Michael Cohen, guilty of crimes growing out of an investigation into the Trump campaign. And I say that as someone who lived through Watergate, having worked as a young staffer at the Democratic National Committee at the time of the break-in (even encountering one of the burglars earlier in the day) and as a member of the professional staff of the House Judiciary Committee during Richard Nixon's impeachment hearings. The difference between then and now says much about our politics, leaders and culture.

Politics in the Nixon era was as deeply divided as it is today -- perhaps more so, as thousands of Americans were dying in an unpopular war halfway across the world. The 1972 re-election of Nixon was also deeply ideological, with Democrats moving left (it is why I quit my job at the DNC after George McGovern became the party's presidential nominee) and Republicans embracing law and order. Not much has changed there, except that the ideology itself is a bit fuzzy, at least for Republicans. Democrats are still reliably left on most issues, but Trump has turned the GOP into a quasi-populist party whose supporters see themselves as victims of big business, the "deep state" and elites. But the Watergate hearings shocked Republicans, as well as Democrats. It took a while, but once they revealed the extent of Nixon's involvement in the cover-up of the Watergate break-in, even loyal Republican members of Congress peeled away. It remains to be seen whether that will happen as the Robert Mueller investigation unfolds.

The biggest difference between Watergate and the myriad Trump scandals -- from paying off porn stars so they would keep silent to meetings between Trump campaign officials and family members and Russian operatives -- is that Nixon was a more honorable man than Trump. When the extent of Nixon's malfeasance became known, he resigned. It was the right thing to do. He saved himself from the potential of being removed from office, but he also saved the country from the trauma that would have entailed. At this point, President Trump is not just digging in his heels but also attacking the very institution of justice. He casts aspersions on career prosecutors, maligns his own Department of Justice and intelligence community, and dangles the prospect of presidential pardons for guilty people who keep their mouths shut. Trump may well pardon Manafort, even though a jury of Manafort's peers found him guilty of cheating U.S. taxpayers out of millions of dollars. Nixon's crimes, as abhorrent as they were, nonetheless did not seek to enrich him or to betray national security. The same cannot be said with any certainty about Trump.

However, the most damning difference between the Watergate era and today has to do with culture. The 1960s ushered in moral relativism, but now even conservatives argue about whether truth is knowable. Say what you will about the '60s radicals (and I've said plenty condemning them), at least they were honest about their aims. They wanted to tear down the establishment and abolish the rules, a recipe for anarchy and depredation. But Trump and his cohorts are every bit as dangerous. They are antinomians. They believe in moral rules and law, but they don't believe they should be subject to such petty constraints. Let other people pay taxes, be faithful to their spouse, tell the truth. Those dicta do not apply to those who are above the law, God's and man's.

Michael Cohen can hardly be called a hero, but he is man enough to admit he has broken the law. Whether Cohen will succeed in bringing down the man who helped make him is anybody's guess, but others may follow his example. The president should be worried. Very worried.

Share this on Facebook
Tweet
Is This Why Chris Cuomo Was Really Fired?
Matt Vespa
Rashida Tlaib Wants You to Pay Her Student Debt
Katie Pavlich
Oh, So That's Why Chris Cuomo Was Able to Hang Around For So Long at CNN
Matt Vespa
DOJ Sues Texas Over New Redistricting Maps
Madeline Leesman
People in One Country Are Increasingly Implanting Microchips That Show Vaccine Records