While No One Was Looking

Linda Chavez
|
Posted: Sep 01, 2017 12:01 AM
Share   Tweet
The opinions expressed by columnists are their own and do not necessarily represent the views of Townhall.com. 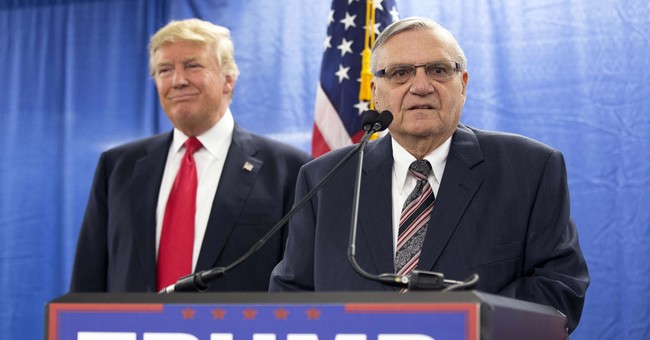 With all eyes focused, rightly, on Texas and the victims of Hurricane Harvey, it is easy to overlook the grave threat to constitutional democracy the president issued when he pardoned former Maricopa County Sheriff Joe Arpaio last week. On its surface, the pardon looks like just another nod to rabid anti-immigration forces. Arpaio is best known for his aggressive -- and unconstitutional -- tactics in Arizona against anyone he or his deputies suspected to be an undocumented immigrant, even if the person had committed no crime. Under Arpaio's orders, deputies could stop and demand proof of legal status of anyone they chose. A federal judge ordered the practice stopped because it violated the Fifth Amendment, which guarantees due process to everyone, but Arpaio defied the order. The judge found that Arpaio's actions showed contempt of court and would have sentenced the 85-year-old next week, but the president's pardon intervened.

The Constitution provides that the president can pardon anyone who has committed a federal crime and do so for pretty much any reason he chooses. Bill Clinton infamously pardoned billionaire financier Marc Rich -- a fugitive who had been found guilty of racketeering, wire fraud and income tax evasion, among other crimes -- after Rich's former wife made large donations to Clinton's re-election campaign. But though the pardon stank of corruption, it proved to be more a stain on Clinton than on the Constitution. The Arpaio pardon is different. Arpaio's crime directly defied a court order intended to enforce constitutional protections and therefore was a direct assault on the Constitution itself. It is not just that Arpaio committed illegal acts against individuals, refused to obey a lawful court order and used his position as a police official to deny others their constitutional right to due process.

No president has ever done what Trump has -- so the question of whether Trump's broad authority to grant pardons extends to violating the Constitution itself is unlike anything we've ever had to face.

I doubt that Trump even considered the possibility that what he was doing was outside the norm; he's repeatedly redefined what is normal for a president to do since the day he took office. But if allowed to stand unchallenged, Trump's pardon could set a very dangerous precedent. Some legal scholars are already questioning the president's actions. As reported by Jennifer Rubin in The Washington Post, a group called Project Democracy has sent a letter to the public integrity section of the Justice Department's criminal division, arguing, in her words, that "the president cannot obviate the court's powers to enforce its orders when the constitutional rights of others are at stake."

Although the Framers didn't place parameters around the pardon powers -- saying the president "shall have Power to grant Reprieves and Pardons for Offenses against the United States, except in Cases of Impeachment" -- it is inconceivable that they intended for the president to be able to do away with the separation of powers or invalidate the protections afforded by the Constitution itself. For example, could the president pardon an official who decided to defy the 14th Amendment or the First Amendment?

Many of the president's strongest supporters oppose birthright citizenship to children born to immigrants here illegally. If county officials refused to issue birth certificates to those babies whose parents they suspect are undocumented immigrants, could the president pre-emptively pardon them, putting the children in limbo? If a local sheriff didn't like what the local newspaper printed, could he shut down the presses, confiscate or destroy the newspaper's property and defy court orders to restore it? (Arpaio actually came close to that scenario when he went after the Phoenix New Times with illegal subpoenas, threats of multimillion-dollar fines and nighttime arrests of newspaper executives when the paper printed information Arpaio didn't like.) If the president can simply override any part of the Constitution he doesn't like by pardoning officials who violate it, how does this not give him dictatorial powers?

The Arpaio pardon may be the worst thing the president has done to date -- and unfortunately, it was done while no one was looking. But if it goes unchallenged, it will embolden a president who has already shown his contempt for propriety, law and the Constitution.