Linda Chavez
|
Posted: Feb 24, 2017 12:01 AM
Share   Tweet
The opinions expressed by columnists are their own and do not necessarily represent the views of Townhall.com. 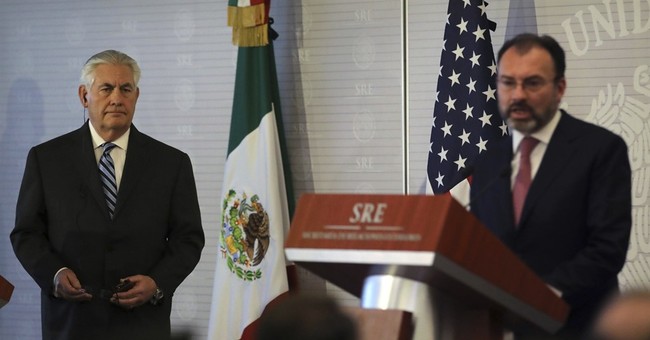 Trending
The United States has benefited for more than 160 years from having a friendly neighbor to its south, Mexico. But that may be about to change. This week, Secretary of State Rex Tillerson and Secretary of Homeland Security John Kelly visited Mexico to begin talks on renegotiating the North American Free Trade Agreement and on President Donald Trump's aggressive new immigration enforcement orders. But Mexico is in no mood to play nice.

Mexico is still smarting from candidate Trump's canards about Mexican immigrants, accusing Mexico of "not sending their best. ... They're bringing drugs. They're bringing crime. They're rapists." It has only gotten worse since President Trump took office. He continues to claim that Mexico will pay for the wall he intends to build on the border -- which estimates now predict will cost more than $20 billion. And the plan to step up deportations of undocumented immigrants falls most heavily on Mexicans, who account for about half of the undocumented population in the U.S., some 5.5 million people. But perhaps the biggest insult of all is the administration's plan to dump non-Mexican deportees across the border in Mexico.

For nearly a decade now, the majority of those crossing illegally into the United States on our southern border are not Mexicans but Guatemalans, Hondurans, Salvadorans and others for whom Mexico is simply their transit point. Mexico is under no obligation to accept these non-Mexican deportees from the U.S. any more than Canada would be. And the Mexican president and foreign minister have made abundantly clear that Mexico, no less than the United States, is a sovereign country. But the administration hopes to bully Mexico into acceding to its demands by withholding aid and restricting trade.

A new immigration order signed by Kelly this week directed his undersecretary for management to "identify all sources of direct or indirect federal aid and assistance, excluding intelligence activities, from every departmental component to the Government of Mexico on an annual basis, for the last five fiscal years, and quantify such aid or assistance." The unambiguous threat is that if Mexico doesn't play ball, the aid will be jeopardized. But most of the aid to Mexico is given not out of the goodness of American hearts but to further U.S. interests, most notably in law enforcement and narcotics control. Do we really want to weaken Mexico's ability to fight drug cartels? Those cartels exist largely because of the insatiable demands of U.S. customers who consume the opioids, cocaine, methamphetamine and marijuana that come from or through Mexico. And the money and weapons that sustain the cartels come primarily from our side of the border.

Nor, despite President Trump's rhetoric, is trade with Mexico a one-way street. Mexico is our third-largest trading partner. We import more from Mexico than we export to Mexico, but Mexicans still bought $237 billion worth of goods and services from the U.S. in 2015. If the administration were to start to turn the screws on Mexico by imposing tariffs, Mexico would have the ability to do the same to U.S. goods, as well as sell products it now sells to us to other customers in Asia and elsewhere. Who would end up paying? American consumers, farmers and manufacturers, who would either pay more for goods they purchase or have fewer customers for their own products.

Perhaps the most dangerous part of Trump's bellicose rhetoric and actions is that they have revived the anti-American sentiment that once dominated Mexican politics. It took more than a century for most Mexicans to put aside the humiliating defeat of the Mexican-American War in 1848. Mexico lost almost half its territory in that war, which Abraham Lincoln called immoral and Gen. Ulysses S. Grant referred to as "one of the most unjust ever waged by a stronger against a weaker nation."

If the administration isn't careful, Mexico may lurch dramatically left in the next elections. Mexico City Mayor Andres Manuel Lopez Obrador, who has twice run for president of Mexico, leads some recent polls in the race to succeed the term-limited current president, Enrique Pena Nieto, in 2018. A socialist leading Mexico wouldn't be good for Mexicans or for Americans.

If President Trump thinks he has problems with Mexico now, just wait until he sees what his policies bring in the future.