Linda Chavez
|
Posted: Apr 08, 2016 12:01 AM
Share   Tweet
The opinions expressed by columnists are their own and do not necessarily represent the views of Townhall.com. 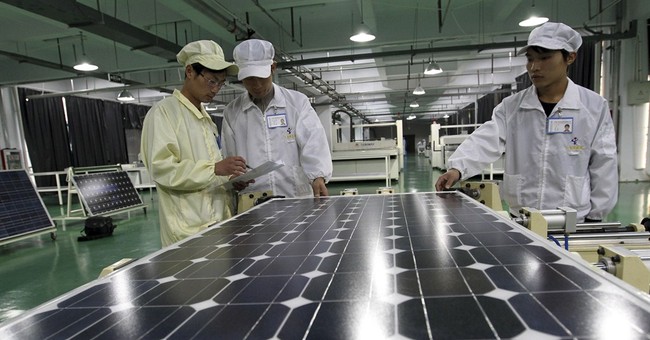 "Trade" has become a dirty word in this year's presidential race, with candidates of both parties bemoaning the American jobs supposedly lost to foreign competition because of our trade policies. Donald Trump has repeatedly threatened a trade war with our most important trading partners, who, he claims, are "killing us." But Ted Cruz, Bernie Sanders and Hillary Clinton all fret about the issue and vow to take a harder stance, as well, if elected. Obviously, the message is resonating with the electorate, which makes it more dangerous still. Is there anything that can be done to reverse this sudden anti-free trade frenzy?

Education on the issue is sorely lacking. Most people see trade as a zero-sum game. If China sells us more than we sell China, it results in a trade deficit -- which must be bad, right? If products that used to be produced in the U.S. by American workers are suddenly being built in Mexico by Mexican workers, that's bad for us, isn't it? Try convincing a guy who used to build auto parts in Michigan that he's better off overall because those parts are now being manufactured in Mexico. It's a hard sell. But the fact is that all of us benefit from the availability of products imported from lower-wage countries; we're a lot better off, as it happens.

Trump says he would raise tariffs on Chinese and Mexican goods; he's thrown around the figure 45 percent for China and 35 percent for Mexico. He seems to believe that if he did so, China would stop manipulating its currency and Mexico would crack down on illegal immigration. But think, for a moment, about what raising tariffs on these countries' goods would mean for the average American, even if Trump were successful in making this move unilaterally with no retaliation against American goods from the governments he'd be punishing (a fantasy).

Most people want to pay as little as possible for goods, provided that the goods meet their expectations for quality. Americans buy Chinese-made clothing -- and increasingly clothing from other, cheaper sources, such as Malaysia and Vietnam -- because they see value in paying less, even if the quality isn't quite the same. You don't expect a Chinese-made silk blouse to be the same as an Italian-made silk blouse, but you pay a lot less on average for the former. It's the same with electronic goods, toys, furniture, lighting and a host of other Chinese imports.

The United States is the biggest importer in the world precisely because Americans crave goods that other countries can produce at cheaper prices than we can at home. If we were to invoke tariffs, American consumers would end up paying them in higher prices, not the Chinese or Mexican government, or else doing without the products altogether.

Like your smartphone? If so, you'd better hope that Trump's trade fantasies don't become a reality. Several countries contribute to the making of an iPhone. It begins with engineers in the United States, but many of them are foreign-born. Rare minerals from Mongolia go into chips and other components. The gyroscopes come from Italy and France, and the microchips are manufactured in South Korea and Taiwan. Assembly mostly happens in China. The gadgets aren't cheap, but they would cost a whole lot more if every part had to be manufactured and assembled in the United States.

International trade is so interwoven into modern life that it is difficult to see how we could do what Trump and others promise, namely bring back American jobs. Though it is true we have far fewer manufacturing jobs than we did a generation ago, much of the reason has to do with gains in productivity in the manufacturing sector, not jobs being shipped overseas. Again, those gains, which sometimes put individuals out of work, benefit everyone at the cash register.

A far better way to deal with the downside of international trade is to help retrain workers whose jobs have disappeared. That way, they can learn the skills still in demand in the United States. We already provide relief to workers whose jobs have been adversely affected by trade agreements -- including wage supplements for certain workers, health benefits and training -- but the programs are bureaucratic and depend on individuals to take the initiative to find new fields of employment and secure needed training.

Politicians' exploiting American workers' fears and anxieties about trade is nothing new, but we should not change policies that benefit the great majority of Americans with lower prices, access to more goods and opportunities for American companies to excel at what they do best, innovating and providing leading-edge products that are the envy of the world.