Not All Elections Are Democratic

Linda Chavez
|
Posted: Feb 26, 2016 9:37 AM
Share   Tweet
The opinions expressed by columnists are their own and do not necessarily represent the views of Townhall.com. 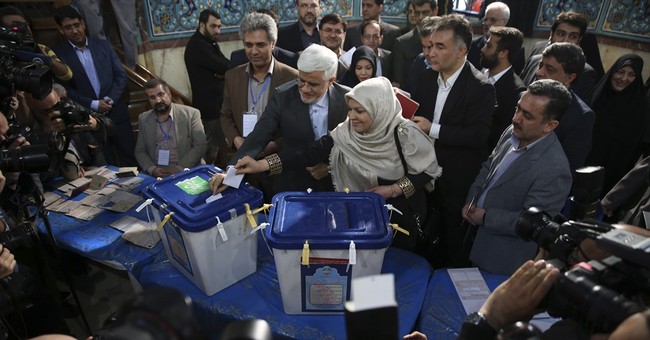 Trending
As messy as this year's U.S. presidential election seems in the midst of the hard-fought nomination battle in both parties, no one questions that the voters will decide. Anyone wishing to run who meets the basic qualifications of being a natural-born citizen at least 35 years old can put his or her name before the voters. Those supporting a losing candidate may not like the results, but we can't question that we've been given a fair chance in the process. The same can't be said for elections taking place Feb. 26 in Iran, which will effect not only the people of Iran but Americans as well, after the disastrous agreement on nuclear weapons reached by the Obama administration with the current regime.

Iranians go to the polls Friday to select members of the 290-member Islamic Consultative Assembly -- the nearest thing Iran has to an actual parliament -- and for the 86-member Assembly of Experts, which is nominally tasked with selecting the Supreme Leader. Iran's system, despite the facade of elections, is anything but democratic. Its constitution provides for a "Guardian Council" made up of six theologians and six jurists, appointed by the Supreme Leader and the Supreme Leader-appointed chief jurist, respectively. The Guardian Council's purpose is to ensure that any laws passed by the consulting assembly are compatible with Islam as interpreted by the Guardian Council. There is no separation of powers as we know it; it is essentially a system where one man rules: namely the Supreme Leader, the Ayatollah Ali Khamenei.

Nonetheless, as in most totalitarian systems, the government desperately seeks legitimacy in the eyes of its own people and the world, which is why sham elections take place. The illusion that the people have a role to play helps keep dissent in check, though, as we saw in 2009, when obvious vote-rigging occurs the people protest. But those protests were met with violent crackdowns. And in the face of total abandonment of democratic forces in Iran by the West, especially U.S. President Barack Obama, their protests led to little change.

Friday's elections are guaranteed to produce the results the ayatollah wants. Initially, more than 12,000 individuals registered as candidates for the 290 parliamentary seats. But unlike in a democracy, those candidates don't go through a vetting process by the people to winnow the field; instead, the Guardian Council approves a five-member team to consider the eligibility of candidates. In order to qualify, candidates must "believe and adhere to Islam and the sacred system of the Islamic Republic in practice." These positions "belong to Hezbollahis and revolutionary and committed individuals," according to a statement by the secretary of the Guardian Council in October 2015. In other words, they must be in line with the regime, which brooks no dissent or argument.

As a result of the Guardian Council's role in selecting who will actually appear on the ballot, half were disqualified for the Consultative Assembly, including 50 current members who wanted to run for re-election. Of the 810 candidates for the Assembly of Experts, only 165 were approved, and not a single woman qualified.

One of the most interesting aspects of Iran's election is that it reflects a power struggle between Ayatollah Khamenei and Iranian President Hassan Rouhani. Khamenei is old and sick and will not likely last much longer in power as the Supreme Leader. He is believed to want to step down and to play the decisive role in selecting his successor, but Rouhani and former President Hashemi Rafsanjani have other ideas. While some in the West see the Rouhani-Rafsanjani faction as "moderate," the fact is neither man behaved as a moderate in office, engaging in the same extrajudicial killing and torture of dissidents and pursuing the same goal of an expansionist, nuclear-armed Iran. The fight is not so much one of ideology as it is a power struggle, with the Rouhani-Rafsanjani group seeing an opening to the West that helps the Iranian economy as consolidating their hold over the people.

In the end, nothing will change in Iran until the Iranian people can make their own choices for leadership. As the leading opponent of the regime, president-elect of the National Council of Resistance of Iran Maryam Rajavi, said, "The sham elections are merely an instrument for imposing a medieval caliphate on the 21st century." Unfortunately, the Obama administration has helped prop up that regime, which will be a greater threat to the United States in the future and will pose a major challenge to whoever ends up winning our messy, democratic presidential election.