We Are Already at War on the Ground 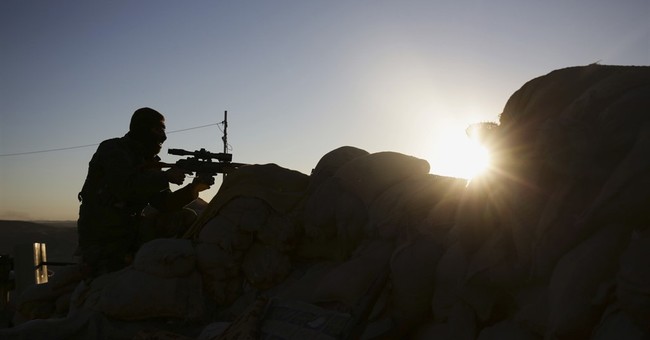 President Barack Obama has a choice: He can either destroy the Islamic State group in Syria and Iraq or see the Islamic State bring its war to America. It is only a matter of time. Never has an enemy been so clear and direct about its aims -- or more ruthless in its methods. The Islamic State has already said that it will launch attacks against Washington, D.C., and New York City, and we have seen from the blood flowing in the streets of Paris and the body parts strewn over the sands of Sinai that it has the means to do so. Yet the president cannot muster the will to take the fight to the enemy.

Perhaps French President Francois Hollande can convince Obama that the West is already at war and that the only question is whether the United States will commit to win the fight, which cannot be done only from the air. If Hollande fails to convince Obama, he may well find a more willing partner in Moscow -- forever changing the world in the process.

It is no accident that in launching a war against the Islamic State, as Hollande declared in the aftermath of the attacks in Paris, France did not invoke Article 5 of the North Atlantic Treaty. The mutual defense clause commits all NATO countries to treat an attack on one member as an attack on all. Instead, France invoked a far weaker provision of a European Union treaty, which pledges member nations to provide "aid and assistance by all means in their power" when a member nation faces "armed aggression on its territory."

France did so to keep its options open. Asked on Twitter why France didn't invoke NATO's Article 5, French Ambassador to the U.S. Gerard Araud tweeted that one reason was "the dialogue with Russia." In other words, if our oldest ally cannot depend on the United States, it will look to Russia to help.

Obama has created a vacuum of leadership that others will fill, and Russian President Vladimir Putin is all too eager to do so. Even before the Islamic State brought down a Russian airliner over the Sinai Peninsula, Russia's involvement in the Middle East was troubling. Putin has committed planes, weapons and men to the civil war in Syria, but his main purpose to date has been propping up the Assad regime.

Russian bombs have hit anti-Assad rebels indiscriminately, not focusing on destroying the Islamic State but keeping Bashar Assad in power. Similarly, Russia has strengthened its ties to the Iranian regime, allying itself with the extremist government in Tehran to counterbalance U.S. anti-nuclear aims.

Even Israel has reached out to Russia in the wake of Obama's abrogation of power in the Middle East. Israeli Prime Minister Benjamin Netanyahu visited Moscow in September when satellite photos showed a massive Russian military buildup in Syria, including fighter jets. Netanyahu said afterward that the discussions were aimed at ensuring "a joint mechanism for preventing misunderstandings between (Israeli and Russian) forces" in and around Syria.

Many intelligent analysts believe that Islamic State leaders on the ground in Syria directed the attacks on Paris and that they are planning more attacks on other cities. CIA chief John Brennan said in the wake of the attacks: "This is not something that was done in a matter of days. This was something that was deliberately and carefully planned over the course, I think, of several months in terms of making sure that they had the operatives, the weapons, the explosives with the suicide belts."

The men who stormed the Bataclan concert hall and mowed down restaurant patrons in the streets of Paris were disciplined, trained soldiers, many of whom had seen action on the battlefield in Syria. The United States must join France and those other nations that share our democratic values to destroy the Islamic State. Our aim cannot be simply to contain the Islamic State as the president maintained we had done in the face of all contrary evidence just days before the Paris attacks. Our goal cannot be just to degrade the Islamic State with hit-or-miss airstrikes in Syria and Iraq.