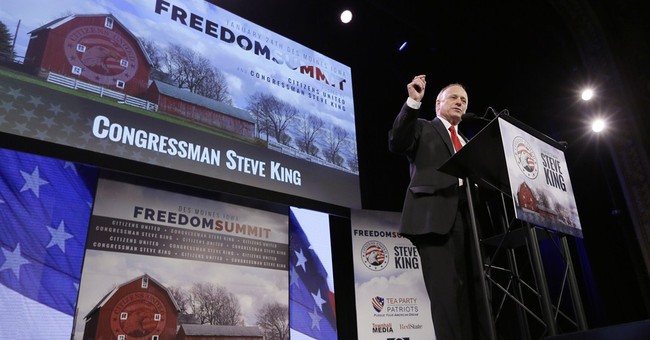 Rep. Steve King's Iowa Freedom Summit last week was not the most fortuitous launch for Republican presidential hopefuls, but it could have been worse. The Iowa congressman has embarrassed himself and the GOP with his anti-immigrant rhetoric over the years, which is no doubt why some prominent would-be candidates had "scheduling conflicts" that kept them away. Missing from the forum were Jeb Bush, Marco Rubio, Rand Paul and Mitt Romney, whose missteps on immigration last time helped cost him the election.

Most of those attending managed to keep their remarks civil -- attacking President Obama's use of executive action to grant legal status to some five million persons in the country illegally rather than the illegal immigrants themselves.

There were some exceptions. Donald Trump said of the undocumented that "half of them are criminals," and former Sen. Rick Santorum blamed immigrants, legal and illegal, for depressing wages among the native born. Trump is a fool, but Santorum should know better.

Overall, immigration has a net positive impact on the wages of native-born workers, according to most studies. What is more contentious is whether immigrants, especially those who have low education levels and lack legal status, depress the wages of low-skilled American workers.

The National Bureau of Economic Research evaluated the effect of immigrants on American wages from 1990-2004, the period of highest illegal immigration in decades, and found that American wages went up almost 2 percent as a consequence of immigration, legal and illegal. It is easy to forget that immigrants are not only workers; they are also consumers and taxpayers (yes, even illegal immigrants pay taxes). Immigrants expand the pie; they don't just take up a bigger slice.

But not all groups fared equally well. The wages of low-skilled immigrants from earlier cohorts went down about 1 percent in the same time period, largely because these were the workers most likely to be competing with the newcomers. But, as the NBER noted in its findings, even this group may have been harmed less than imagined because many among the older arrivals were relatives and friends of the newcomers and, thus, may have received some non-economic benefits from their migration.

It might be politically useful for someone like Santorum to pander to the small restrictionist base of the GOP when blaming immigrants for wage stagnation, but it certainly won't help lower-middle-class American workers deal with the real problems they face.

And those problems are significant. Wages have stagnated for working-class Americans in recent decades, not because immigrants are stealing good paying jobs, but because our economy has changed. The economy increasingly rewards workers who have the most education. Those who have inferior education credentials (determined both by quantity and quality) suffer. But other factors have played a role, too.

The recession dealt a heavy blow. The economy lost jobs, and the administration's efforts to mitigate the effects actually exacerbated the slow recovery. Ironically, long-term unemployment benefits discouraged workers from re-entering the workforce after they lost their jobs and led to a huge increase in the number of Americans leaving the labor force. A new analysis by NBER out this week concluded that 1.8 million people took jobs in 2014 when their unemployment benefits ran out, including almost 1 million who had dropped out of the labor force.

Geographic mobility is another factor that has depressed prospects for middle-class workers. The U.S. traditionally has had very high rates of mobility, with workers willing to relocate when jobs disappeared from their communities. But Americans are far less likely to do so today, for a variety of reasons, including the difficulty of selling homes whose values declined in the housing bust. Recent immigrants, especially those less skilled, are far more likely than the native born to be willing to chase jobs from one community to another, as a study by Brian C. Cadena and Brian Kovak showed recently.

If the GOP hopefuls spent more time coming up with solutions to the real problems many American workers face instead of blaming immigrants for all their woes, we'd all be better off.