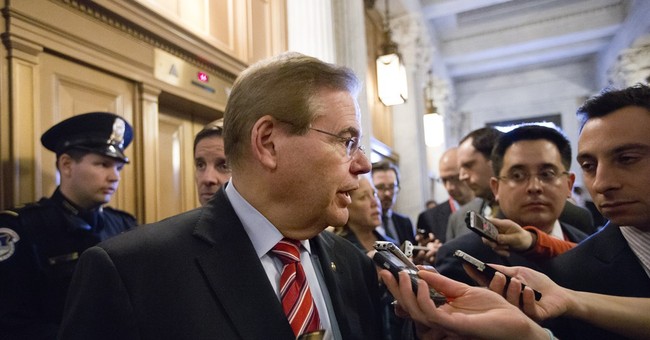 Trending
In what was one of the most stunning rebukes of a sitting president by a member of his own party, Sen. Robert Menendez accused President Obama of taking his talking points on Iran "straight out of Tehran" after the president's State of the Union address. It's not the first time the ranking member of the Senate Foreign Relations Committee has disagreed with the president. In early January, when the president announced his unilateral opening to Cuba, Menendez said the administration "got absolutely nothing for giving up everything that the Castro regime wants." Menendez gives hope that there are at least a few Democrats who understand the nature of totalitarian regimes.

Menendez may not be Henry "Scoop" Jackson, the legendary Democratic hawk who was the scourge of the appeasement wing of his party in the U.S. Senate from 1941 to 1983, but he knows a bad deal when he sees one. And the president's line on Iran's nuclear program -- that "we've halted the progress of its nuclear program and reduced its stockpile of nuclear material" -- is nothing short of a lie. Now the question for Democrats will be whether others will join Menendez in pushing for tougher sanctions against Iran. The president has already announced he will veto a sanctions bill, but Menendez would need only 12 other Democrats to join the 54-member Republican majority to overturn a veto.

Wishful thinking? Maybe. But 11 of the current Democrats in the Senate have co-sponsored Iran sanctions legislation along with Menendez. If all of them could be persuaded to vote to overturn a veto, Menendez would need only one more, assuming the GOP ranks hold firm. After all, the stakes are high enough that fear of what Iran could do with a nuclear arsenal might trump the usual partisan politics.

Menendez has introduced a bill with Republican Mark Kirk of Illinois that would apply tough new sanctions if the talks do not produce an acceptable agreement by June 30. Other bills would attempt to force the White House to submit any pact for a Senate vote, which the president has already signaled he won't do.

The administration's negotiations have so far produced nothing but additional time for Iran to build weapons. The interim agreement that the administration credits with "halting" Iran's nuclear program allows Iran to continue to enrich uranium to 3.5 percent purity in unlimited quantities, which is approximately 60 percent of the purity needed to produce weapons-grade material. While the talks have dragged on, Iran has already enriched enough uranium to quickly produce two bombs. Iran is expected to have enough enriched uranium to produce a third bomb by June, when the deadline for a deal lapses -- though the administration has already signaled it will give Iran more time.

Iran is also pursuing enriching plutonium for nuclear weapons. Under the interim agreement that governs the talks, Iran continues its work on the Arak heavy-water reactor, building off site the parts that can quickly be assembled to make the reactor capable of enriching plutonium to nuclear grade when it chooses. The Iranians also have announced they will build two more light-water plutonium reactors.

In addition, Iran continues toward development of an ICBM. Recent analyses suggest they may have a system by the end of this year. Yet, the president thinks the Iranians should be given still more time before they pay any price for their subterfuge.

As evidenced in his cocky performance in the State of the Union address, the president still believes in his own supreme charm and powers of persuasion, which to date have yielded no foreign policy successes. He may ingratiate himself with the Elizabeth Warren wing of the Democratic Party by following this path, but he's risking America's security -- and the world's -- in the process.

Does the Democratic Party really want to be the party of nuclear proliferation, turning a blind eye while one of the most dangerous regimes in the world builds bombs and the capability to deliver them anywhere in the world?

The Democrats need someone who puts American interests first.

Hillary Clinton certainly won't be the one to do so. She has joined Obama in opposing new sanctions, calling them "a very serious strategic error." Had she taken a tougher line, she might actually have proved herself more than the Obama lackey she was during her tenure as secretary of state.

It's important the president be stopped, and the GOP can't do it alone. If ever there was a time for some cooperation across the aisle, it's now. Good for Menendez for stepping up to the challenge.