A Crisis Born of Inaction 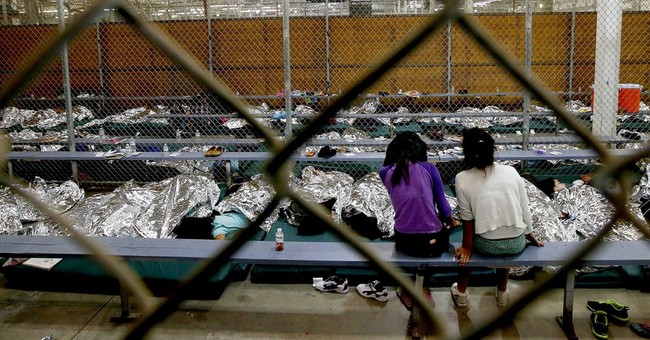 Trending
Legislators who've been dragging their feet on immigration reform hardly need another excuse for doing nothing, but the recent influx of young children across our borders is certainly making things more difficult. Anti-reformers claim the sudden increase in illegal border crossings by unaccompanied minors -- about 48,000 so far this fiscal year -- is proof that the border is far from secure. Pro-reformers point to the humanitarian crisis that has developed with thousands of children being held in holding pens not fit for hardened criminals much less kids. But while the two factions engage in finger-pointing, positions in both camps harden and nothing gets done.

First, it's important to understand what is actually happening, mostly along the 1,200-mile border Texas shares with Mexico. For months, youngsters, some as young as 4 years old, having been crossing into the United States in the hopes they will be allowed to stay. According to recent reports, these kids walk right up to border agents as soon as they see them and turn themselves in. They've been instructed to do so, sometimes by the criminal "coyotes" who extort hundreds, even thousands, of dollars from the kids' parents to get them across the border.

These human traffickers are telling parents their children will be granted a legal right to stay in the U.S. once on our soil. This is absolutely false -- but that word is slow in getting to gullible would-be border crossers.

Most of these children are from Honduras, Guatemala and El Salvador, which means they've traveled at least 1,300 miles to get to the U.S. border. They walk or ride on the tops of trains, sometimes falling to their deaths or incurring severe injury. Some are abused, beaten, robbed, raped. The fortunate ones make it into the U.S. only to end up sleeping on the cement floor of a cell, shoulder to shoulder with dozens of other children.

As tragic as the situation is, we have to figure out alternatives to allowing these children to languish in detention centers or become public wards. First, the Obama administration should be doing more to discourage parents from sending these children across Mexico and into our country. The U.S. has an agreement with Mexico in place that allows us to return unaccompanied minors apprehended at the border. We need similar agreements with the Central American countries contributing the current flow. We also need to secure better enforcement by Mexico of its own borders to keep these migrants from entering and crossing Mexican territory. Vice President Biden is in Guatemala this week, and Department of Homeland Security Secretary Jeh Johnson is headed to the border, too, but the administration must do more.

The government needs to make it absolutely clear that the administration's Deferred Action for Childhood Arrivals does not apply to anyone who entered the U.S. after June 15, 2007. The current crop of border crossers will be picked up, processed and eventually removed from the U.S.

When the system works as it should -- and it's not working now because the numbers are so great -- unaccompanied minors can be held for a maximum of 72 hours by DHS while their status and health are evaluated before being transferred to the custody of the Department of Health and Human Services. If they're lucky, they may be released to relatives in the U.S. or placed in foster homes until their appointed hearing date to appear for removal proceedings. At that point, they will come before an immigration judge, without an automatic right to have a lawyer present, and will likely receive a removal or deportation order. Those subject to deportation orders are barred from entering the U.S. for 10 years, and if they try to do so illegally, they may face criminal prosecution.

The administration should be running public service ads in Guatemala and elsewhere in Central America to discourage parents from sending their children to the U.S. And immigrant advocacy groups in the U.S. need to spread the word in the immigrant community here that unaccompanied minors face tremendous dangers on their trips north and won't be allowed to stay even if they make it.

But most of all, Congress should act. False hopes and fantasies are driving this exodus. Congress needs to get to work and rewrite immigration laws to make it possible for those whose labor we need to come here legally in an orderly fashion. Doing nothing -- which is the default mode now -- won't stem the flow of illegal immigrants, and the current paralysis contributes to the crisis we're seeing on the border now.