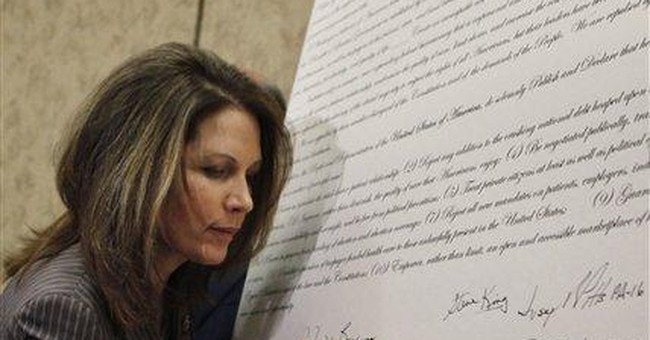 For years, conservatives have rightly decried the distortion, misrepresentation and downright ignorance of American history that has sometimes infected left-wing rhetoric. We've complained that public schools do a poor job of teaching our history and an even worse job of transmitting American values. History matters; as the philosopher George Santayana famously said: "Those who cannot remember the past are condemned to repeat it."

But what happens when a conservative gets it wrong? Last week, Rep. Michele Bachmann gave a speech to Iowans for Tax Relief in which she said that the Founders "worked tirelessly until slavery was no more in the United States." MSNBC host Chris Matthews called Bachmann a "balloon head" for her remarks, and others in the media and on the left were no less scathing. But some conservatives defended Bachmann's remarks -- even though she mangled her history.

There is no question that a double standard exists -- the media is much quicker to draw attention to conservatives' faux pas than to liberals'. There's not a great deal we can do about that, so conservatives have to be especially careful when we speak -- especially on race. What's more, because conservatives care so much about history and tradition, we must be sure we have the facts right, and Bachmann didn't. And it wasn't just her specific reference to the Founders' efforts to end slavery but her understanding of the struggle for equal rights that went awry.

As every schoolchild should know, slavery was not abolished until the ratification of the 13th Amendment to the Constitution in 1865. President Lincoln's Emancipation Proclamation in 1863, issued in the third year of the Civil War, freed only those slaves living in states that had seceded from the Union. And, of course, some of our Founders -- most notably George Washington and Thomas Jefferson -- not only did not "work tirelessly until slavery was no more" but owned slaves.

But even the abolition of slavery did not usher in an era of colorblind equal rights like that invoked by Bachmann in her Iowa speech. In speaking about the nation's founding principle of e pluribus unum -- out of many, one -- Bachmann said that "our ancestors when they arrived on these shores ... it didn't matter the color of their skin, it didn't matter their language ... it made no difference once you got here, we were all the same." But that was not the case through much of our history well into the latter half of the 20th Century.

The realization of colorblind equal opportunity came about through decades of struggle. It took not only a Civil War, the bloodiest in our nation's history, costing more than 600,000 lives, but a hundred-year campaign for civil rights that culminated in the passage of the 1964 Civil Rights Act, the 1965 Voting Rights Act, and the 1968 Fair Housing Act. Along the way, we often stumbled. Congress passed laws restricting immigration to the United States based on race and national origin. States denied basic rights to blacks and others by law, setting up state-required segregation, which the Supreme Court approved until its landmark decision in Brown v. Board of Education in 1954.

Michele Bachmann should know this history; she aspires to be a conservative leader -- perhaps even a presidential candidate -- after all.

Conservatives should not sugarcoat our history any more than liberals sometimes denigrate it. The most remarkable fact of our history is not that we have fallen short of our ideal that all men are created equal but that we have made progress toward realizing that goal in our ongoing endeavor to secure equal rights.