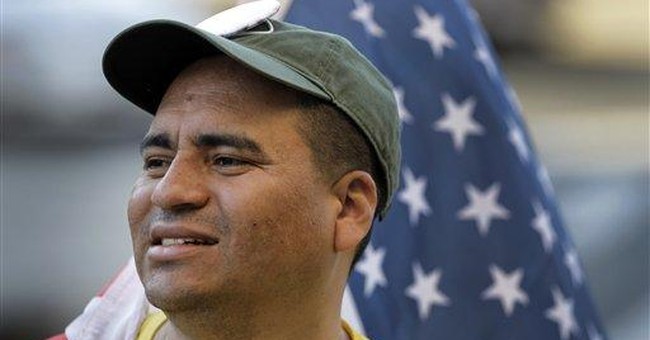 The Democrats' only chance to maintain their control of Congress this election depends on the party's ability to turn out its base. Democrats can't win unless young voters, those with lower incomes, union members, and those who are members of minority groups, especially blacks and Hispanics, turn out in larger-than-usual numbers for a non-presidential election year. A higher-than-average turnout among such voters helped President Obama win in 2008, but there isn't much indication that these voters will do so this election. And now there's solid evidence that one of those groups -- Hispanics -- will be a big disappointment to Democrats this year.

A new poll out from the Pew Hispanic Center suggests that even though a large majority of Hispanic voters favor the Democrats, it may not mean much come November. Hispanics are now the largest minority group in the country, making up more than 15 percent of the total population. But they constitute a smaller percentage of those actually eligible to vote -- only 9 percent -- because a larger proportion of them are under 18 years of age or are not citizens.

Hispanics have traditionally voted Democratic, but various Republican presidential candidates have been able to make substantial inroads into the Hispanic vote. From the elections of Richard Nixon to Ronald Reagan to George W. Bush, between a third to well over 40 percent of Hispanic voters cast their ballots for Republicans.

In the last two national elections, however, Hispanics have deserted the Republican Party in droves, largely because the GOP has been perceived as less friendly territory. And the Pew poll shows only about one-in-five Hispanic registered voters as preferring Republican candidates in this year's congressional election; whereas among all registered voters, preference is about evenly split between Republicans and Democrats.

But the real problem for the Democrats is that Hispanics aren't very motivated to vote this year. Only about half of registered Hispanic voters say they will vote in November's midterms, according to the Pew study, compared with 70 percent of all registered voters. And among Hispanics who say they will vote, a slightly higher proportion of those who lean Republican are likely to vote than those who lean Democrat.

Democrats have been counting on Hispanic dissatisfaction with the GOP's hard-line rhetoric on immigration as their ace in the hole with Hispanic voters. But many Hispanics are also unhappy with the Democrats' inability to get an immigration bill passed even though they control both houses of Congress and the White House. What's more, immigration isn't high on the list of priorities for Hispanic voters this election, ranking only fifth among seven issues tested (among all voters, immigration is an even lower priority, ranking 10th among 13 issues in another 2010 Pew poll).

A plurality of Hispanics, 47 percent, say they think that Democrats care about them, whereas only 6 percent think the GOP is concerned for their welfare, including only 18 percent of Republican Hispanics. But caring is one thing -- and delivering on policies that matter is another.

Like most Americans, Hispanics rank jobs, health care, and the federal budget deficit high on their list of priorities. But the issue that matters most to Hispanic voters is education -- which was ranked first by 58 percent of those polled. But when it comes to education, Democrats have shown little leadership in recent years. Nearly all the ideas for major school reform have come from Republicans, from charter schools to school vouchers to tying teacher pay to student performance. If Republicans were smart, they'd be reaching out to Hispanic voters on issues like this.

Democrats may have the hearts of Hispanic voters, but motivating them to vote is another matter. In the end, however, Hispanic voter apathy will hurt Hispanics more than it hurts either party. It will mean Democrats can continue to take them for granted, if a little less so because they may not show up when it counts. And it will mean Republicans don't have to bother appealing to them because they are less likely than other groups to vote.